FORT CLATSOP, Oregon – They lived here only three months, but for the Lewis and Clark Expedition, the winter of 1805-06 was a critical time to update journals, organize scientific data, and prepare maps that would help ease the journey home.

They had been gone a year and a half, since May 1804, starting from St. Louis for their trip up the Missouri, across the Continental Divide, and 600 miles down the Snake and Columbia rivers. They were ecstatic when they finally sighted the ocean from what is present-day McGown, Washington.

“Great joy …,” they wrote in their journal on Nov. 7, 1805. “We are in view of the ocean … which we [have] been so long anxious to see, and the roaring or noise made by the waves breaking on the rocky shores … may be heard distinctly.”

But within 10 days, Meriwether Lewis and William Clark decided to leave their storm-bound camp on the north shore of the Columbia and cross to where elk were reported to be plentiful. Lewis and a small party scouted ahead, settling on a suitable site where they began to build a fort near the Netul River (renamed the Lewis and Clark River). By Christmas Eve, they were under shelter of the fort they named for the friendly Clatsop Indians. 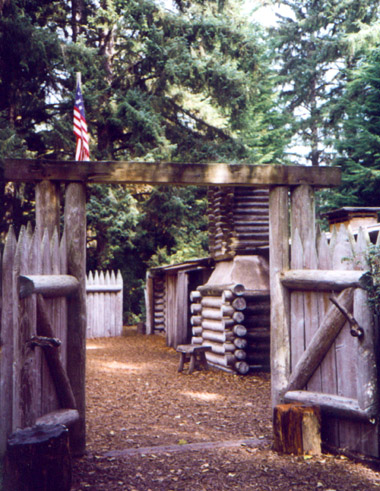 A 50-square-foot stockade in a pine forest was the home of the Lewis and Clark Expedition during the winter of 1805-06. Fort Clatsop, south of Astoria, Oregon, was reconstructed in 1955 using sketches made by Clark. The fort and surrounding area receive 265,000 visitors each year.

Today, visitors may see a replica of the fort, built in 1955 during the Lewis and Clark Sesquicentennial celebration, at Fort Clatsop, south of Astoria, Ore.

Reconstructed using sketches drawn by Clark, the fort now anchors a newly designated combination of sites straddling the Columbia River and along 40 miles of Washington and Oregon coastline. Dubbed Lewis and Clark National and State Historical Park, it is America‘s newest national park, expanded from Fort Clatsop‘s original 157 acres to more than 10,000.

At Fort Clatsop, in addition to seeing the captains’ quarters on the south side and men’s quarters on the north of the 50-feet-square stockade, visitors are welcome to walk a serene, cedar-chip path through the forest to the canoe landing on the river, or take a different path to the springs that supplied water for the fort’s 33 inhabitants. 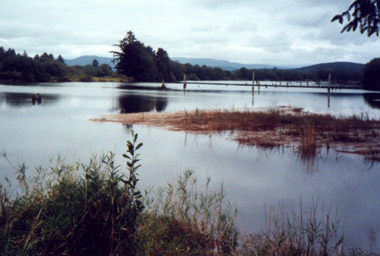 The canoe landing, reached via a forest path from the fort, is believed to be the actual site where the Lewis and Clark Expedition stepped ashore on Dec. 7, 1805.

Markers placed near ferns, trees and other plants quote descriptions of the plants as recorded by the explorers. Near the canoe landing are replicas of the long, wooden canoes hollowed out of huge trunks. During the high tourist season, costumed interpreters demonstrate trapping, canoe building, and other frontier skills in a living-history program. Free guided tours are available year-round at Fort Clatsop.

A 6-mile trail is under construction, leading from Fort Clatsop to the ocean; parts are open now. A shuttle bus will connect most of the sites during the summer, and trails and interpretive signs should be ready for the big signature event, “Destination: The Pacific,” Nov. 11-15.

It’s an awesome feeling to stand in this place discovered by American explorers nearly two centuries ago and contemplate the courage it took to set out on an 8,000-mile journey into totally unknown wilderness. Though their time here was brief, it was significant. 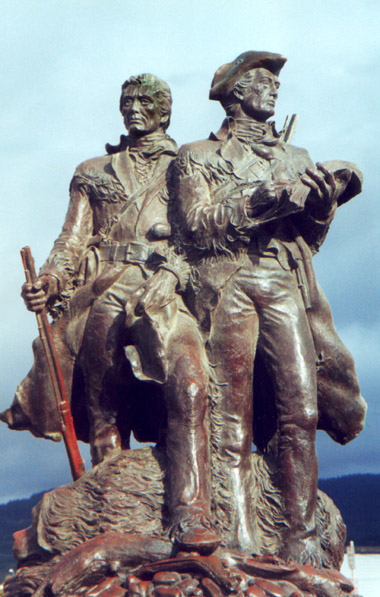 The bronze sculpture “End of the Trail,” by Salt Lake City sculptor Stan Wanlass, stands overlooking the Pacific Ocean at Seaside, Ore. Depicted along with Meriwether Lewis (right) and William Clark is their dog, Seaman.

Another by him, “End of the Trail,” stands on the promenade in nearby Seaside, where the expedition had salt works. Atop a prominent hill across the river in Astoria, Ore., the expedition leaders – along with Thomas Jefferson, the U.S. president who commissioned their journey — are immortalized in carvings on the Astoria Column. 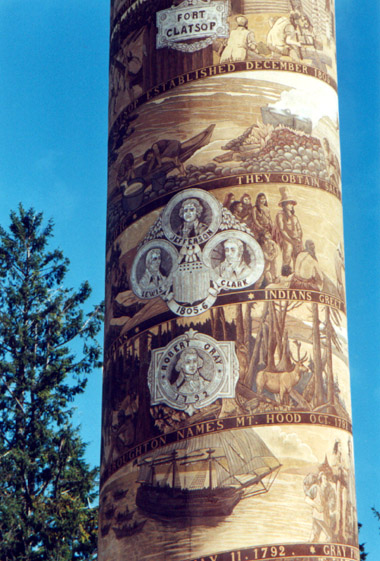 The images of the two explorers, along with U.S. President Thomas Jefferson, appear on the Astoria Column atop a hill in Astoria, Ore. The carved column commemorates significant events in the area’s history.

The former Canby State Park in Washington has been renamed Cape Disappointment, so called by an English captain in 1788 who couldn’t find the passage from the Pacific to the river. There’s a museum and a trail to a lighthouse overlooking the ocean at the mouth of the Columba River.

For more information on Lewis and Clark National and State Historical Park, log onto www.nps.gov/lewi

To locate Lewis and Clark sites on the Internet, access www.lcarchive.org/index.html. To read insightful excerpts from “Discovering Lewis and Clark,” by University of Montana professor Harry Fritz, log onto www.lewis-clark.org.  For information about the Astoria/Warrenton area, including places to stay, see www.oldoregon.com.