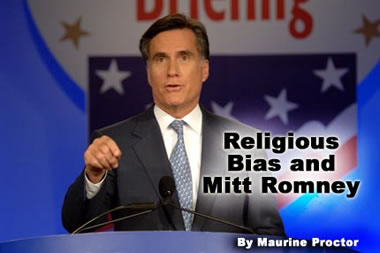 Super Tuesday is behind us, and watching Mitt Romney’s inability to penetrate the South – he consistently came in third place after McCain and Huckabee – raises the question that has haunted his campaign from the beginning. Is this hum-drum showing in the Bible Belt a reflection of religious bias? Or is it merely identity politics, because evangelical voters like to vote for somebody who just looks like them and Mike Huckabee was there to fill the bill?

The question matters because the prospects of any conservative winning the presidency without carrying the largely Evangelical South are small. Should Latter-day Saints, then, who are mostly conservative, not tell their children what every other American does, “You, too, can grow up and be president”?

On the one hand, according to the Boston Globe, “nationally Huckabee, Romney and Senator John McCain roughly split the evangelical vote, exit polls showed yesterday. But in the South, the vote among Christian conservatives was significant, and Huckabee drew the largest percentage of them by far.”

It is also the case that Romney won a few endorsements from Evangelical leaders such as Traditional Values Coalition leader, Lou Sheldon, but many more, whose values line up with Romney’s just wrung their hands and said they couldn’t find their candidate. Romney was invisible to them – not an option.

Last night pundits at The Corner, the blog at National Review, thought the Mormon question was significant. John O’Sullivan said, “My southern belle wife always warned me that many evangelicals would vote for anyone but a Mormon.”

Mark Steyn said, “There was an explicit anti-Romney vote in the South. A mere month ago, in the wake of Iowa and New Hampshire, I received a ton of emails from southern readers saying these pansy northern states weren’t the ‘real’ conservative heartland, and things would look different once the contest moved to the South. Well, the heartland spoke last night and about the only message it sent was that, no matter what the talk radio guys say, they’re not voting for a Mormon, no way, no how.”

Just before she wrote the article, several major conservative news outlets had featured positive stories on Romney as a possible presidential candidate, which made her marvel, for though Americans had apparently become more religiously tolerant, she had vivid memories of the day she first learned about Mormonism and she assumed that thousands of children, just like her, had learned the same lessons.

She wrote, “The first time I ever heard about Mormons was in fifth grade, sitting in a basement classroom of my Baptist church, watching a filmstrip about cults. Our Sunday school class was covering a special month-long unit on false religions; in the mail-order curriculum, Mormonism came somewhere between devil worshippers and Jim Jones.

“Although most of the particulars are lost to me now, one of the images remains in my mind: a cartoon of human figures floating in outer space (an apparent reference to the Mormon doctrine of “eternal progression”) that appeared on the screen next to our pull-down map of Israel. Even at age 10, the take-away message was clear. Mormons were not like us, they were not Christian.”

She said that Evangelical opinions about Mormons have not changed since those days 20 years ago and noted that in 2004 Mormons were excluded from participation in the National Day of Prayer organized by Shirley Dobson, wife of the well-known Focus on the Family leader, James Dobson.

She guessed that, “Some of this anti-Mormonism is a fairly fuzzy sort of bias, based mostly on rumors and unfamiliarity and the vague feeling that Mormons are kind of weird.”

Some of the bias is anything but fuzzy. At Pastors4Huckabee, the effort is to make a biblical claim against voting for a Mormon for president and claim that Christians who support Romney are actually violating scripture.
This is certainly extreme and not reflective of all of Evangelicals, of course, but even recently a poll found that more than four in 10 Americans would find it difficult to vote for a Mormon.

Rodgers and Hammerstein captured how prejudice is engendered in their South Pacific hit, when the main character laments that she cannot marry her sweetheart because he has Polynesian children, “You have to be carefully taught.” Apparently, an entire segment of the population has been carefully taught to consider Mormons pejoratively.

When asked about sentiments toward Mormons, Romney took the high road and told Jay Leno, “I think people want a person of faith leading the country., but I don’t think they select their president or their secular leader based on which church they go to. So as I go across the country, there are probably some who feel that way, but most believe that we should be talking about religious tolerance and recognize that this is the nation that has a religious liberty that is very different than the nations we see around the world. If you’re not a Shia in some places, you can’t be a political leader. We don’t choose our leaders that way.”

A Cover for Bias

Still, bias takes many forms, and though the outright Mormon blasting settled down after Romney’s talk on religion at the Bush library, the attitude is still there, but masked. Vanderbilt political scientist John Geer recently said that one of the reasons that the tag “flip-flopper” stuck with Romney but not his Republican opponents who have also changed their minds on critical issues lies in Romney’s Mormon beliefs.

Geer and his colleagues, including Brett Benson, designed an Internet survey to assess bias against Mormons and its potential impact on the nomination process and general election campaign.

Religious bias hides behind not only the charge of “flip-flopping” but perhaps also behind the charge of being “too perfect.” Unbelievably, Romney has been criticized because he mentioned that he had not had a serious fight with his wife in their marriage. I’ve heard people in Washington complain that they were overwhelmed and disdainful because at one event, he filled the stage with his children and grandchildren – “all those people who look just alike,” as if it were not a plus.

I think Latter-day Saints have assumed that as the nation got more exposure to Romney, religious bias would melt away – the real person taking the place of the negative stereotype. I would be hard-pressed to say that that has happened as widely as we might have hoped.

As Romney’s candidacy continues, it is undeniable that religious bias will continue to play a dominant, though sometimes hidden role.

Something More at Play

Yet more is at play than the presidency for Latter-day Saints. We have learned something unhappy in the last year of presidential politicking that we never had supposed, and it comes as a surprise in this country touted for its diversity and generosity of spirit.

We have been bewildered, disappointed and quite frankly surprised, as we have seen our faith excoriated and blasted both from the left and the right in the press. It would be laughable if it weren’t so marginalizing when we see the press and pundits call our faith everything from “wacky” to “spooky” to a “racket” to much worse, like Jacob Weisberg’s caustic essay in Slate, “A Mormon President, No Way.”

For a season of this campaign such prejudice was our daily fare in the press. Until last year, we thought we were mainstream, and why not? We are the fourth largest denomination in the United States, one of the fastest growing Christian faiths in the world with a new chapel going up every day somewhere in the world, and our members are founders and heads of major companies, federal judges, members of Congress, and international leaders in medicine, business, academia, and communications.

Studies show us to be among the healthiest and best educated people in the world.

It is not that before this campaign we didn’t run into occasional pockets of bigotry. Most of us have had the experience of telling someone we were a Mormon to see them suddenly stiffen in disapproval. We have assumed that occasional person was an uneducated throwback to some earlier, less sophisticated time when in small lives people were wary of differences.

To see the name calling and suspicions whipped up by the press and some people toward The Church of Jesus Christ of Latter-day Saints is not only disheartening, but it has also been alarming. Latter-day Saints have no anti-defamation league to protect them from prejudice.

As Christians, Latter-day Saints are taught to be slow to take offense, but we cannot pretend that real people’s lives are not diminished by bigotry when a nation is taught to disdain them. As citizens of the United States, Latter-day Saints are experiencing more soft bigotry toward us this year than at any time in recent history. For us, this widespread response is new.

What has been so disappointing is that very few have stood up and said to cease and desist. Where are the champions of tolerance in the press or in the pulpits who have stood up and said, “Enough”? Where are all these advocates of diversity, who find Mormonism does not deserve the same respect as other groups in society that are handled with kid gloves?

About the best we get are those who say that Romney’s faith shouldn’t be a problem in considering him for President. The impression that is left is, “Because he is so eminently well-qualified, can we hold our nose and vote for him.”

When Mitt Romney’s father George Romney ran for President in 1968, his Mormon faith was not a question. Have we lost ground in finding that distant, shining shore where people of different faiths and ethnic backgrounds are appreciated and accepted?

If there is a lingering prejudice among some people toward Mormons, the press does not and should not have become their agents. At a recent conference at Princeton called Mormonism and American Politics, Amy Sullivan said that it is assumed that journalists are hostile to religion, but that mostly comes from a lack of knowledge of religious traditions. The unreligious may not do well covering religion.

It is also true that the national press does not always do a good job with complex subjects as any faith tradition is. How much easier and lazier it is to grab anything that sounds strange or dramatically newsworthy and write about a religion superficially.

Harvard law professor Noah Feldman at that same conference said that if the liberal press had said that Romney’s religion was irrelevant, it would largely have been considered irrelevant.