Goodbye to Elder Neal A. Maxwell 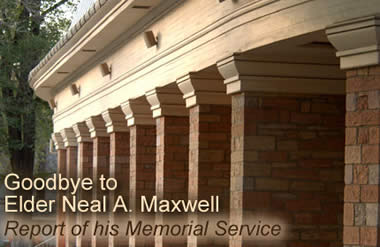 A chapter in Church history spanning over 30 years in faithful leadership came to a close Tuesday, July 27, as funeral services were held for Elder Neal A. Maxwell in the tabernacle on Temple Square.  Speakers included all of the members of the First Presidency, President Boyd K. Packer and Cory Maxwell, a son.

“I know of no other man of so much good can be said,” noted President Gordon B. Hinckley. “His genius was the product of diligence…He was a perfectionist, determined to extract from each sentence every drop of nutrition that could be produced. I think we shall not see one like him again.  It’s a miracle we have had him so long.

“When he was diagnosed in 1996, the future looked bleak,” President Hinckley said, but he was given more time and “has accomplished more in these 8 years than most do in a lifetime.”

The prophet said Elder Maxwell’s focus was “Look to God and live, and look to God he did.”

He said,  “The grand eternal scheme of the Father intrigued him.  He reflected on it.  It consumed his interest…He unrolled the divine scroll to reveal with clarity the design of the master architect of man’s eternal destiny.”

President Hinckley continued, “His love of people was manifested in a score of ways.  He comforted, encouraged and blessed his fellow man.  He gave to those in need. He challenged the proud and the arrogant and caused them to think of the fragile nature of their station and their possessions.”

“Following the onslaught of leukemia,” said President James E. Faust, “he continued to teach us by example and precept great and profound truths…As he went through the refiner’s fire, he became more wise, more meek, more humble.”

President Faust said, “He faced death with the great hope of a delay in route,” yet at the same time he developed a new ministry for those also suffering from cancer.”

President Boyd K. Packer quoted something Elder Maxwell recently wrote on dying, “Some anxieties are understandable.  Our anxieties will turn out to be naïve and perhaps amusing.  Nevertheless it is a new individual experience for those paradise bound.”

Cory Maxwell said, “Dad said his father taught him how to die.  He maintained a sense of humor to the last.  He was able to laugh about his limitations.”  He wore two hearing aids.  He couldn’t hear very well with them, and he couldn’t hear at all without them.  He said, “If I could put in a third, I would.”

President Packer also told of a light moment at the last meeting of the Quorum of the Twelve that Elder Maxwell was able to attend. He saw 98-year-old David Haight leaning on his cane, picked up his own cane and said, “On guard.”  “There was a fencing match of sorts,” said President Packer.  “It broke off without bloodshed on either side.”

President Thomas S. Monson said, “As long as I live I shall cherish my last visit at the home of Neal and Colleen.  We all knew his mortal journey was coming to an end…  Neal and Colleen were going to visit their grandchildren that afternoon.  He gave a special blessing to each of his grandchildren before his passing.

“That day in his home I gave a priesthood blessing to my beloved friend Neal.  I reminded him of a note he had passed to me several years ago as we sat on a stand at a regional conference.  I have kept it in my leather bound copy of  the New Testament all these years.  It said, ‘Tom, I love you.  Neal.’  That special day on my farewell to Neal, he with tears in his eyes said, ‘Tom, I still do.’  I speak for many here today and many beyond the tabernacle today when I say, ‘I love you.’”

Elder Maxwell kept an eternal perspective, telling his son that on the other side of the veil are perhaps 70 billion people.  Releases are given here so those faithful who die may teach the gospel there.  He suggested that some day those who have been taught may thank the bereaved here for their sacrifice.

President Packer said that Elder Maxwell “endured with perfect patience these last days” and noted that both Neal and Colleen possessed a knowledge of the plan of happiness in full measure” and spoke of what a “resplendent reunion” it will be.

He told a story of once entering the office of Marion G. Romney in his elder years, after his wife, Ida, had died.   President Romney said, “When I think that in one or two years I will be with Ida, never to be separated again, I can hardly contain myself with joy.”

Cory Maxwell said, “Dad loved the scriptures,” calling them parachute flares above the trenches of life that illuminate our lives.”

He said, “My father focused intently on leading his family to partake of the fruit of the tree of life.”

He continued, “Dad believed his obligation was to teach the gospel beyond Family Home Evenings, as important as they are.”  He initiated gospel conversations with members of the family and told the children stories from his rich imagination about forest creatures who had important decisions to make.

He wanted his family to fall in love with the scriptures as he had and learn that the gospel was inexhaustible.

“He not only loved us, but he loved to spend time with us,” said Cory Maxwell.  “Dad said he married up spiritually.

President Hinckley addressed Colleen Hinckley Maxwell, “The light of his life has been his beloved Colleen.  She’s beautiful in her features, beautiful in her ways.  Through the years she has shared his love, gloried in his achievements, lifted his burdens, wept with him and prayed with him.

President Hinckley explained how he and Sister Maxwell are related.  “My grandfather is her great grandfather.  As a pioneer he paid a terrible price for the gospel he loved and the Church he served.”  He buried both his wife and his brother the same day in his journey west.  Then he cradled his baby in his arms and continued the journey.

Then President Hinckley spoke personally of having recently been widowed, “As one who has recently passed through this ordeal, I think I know something of what lies ahead of you…At funerals we speak in grand platitudes…To lose ones partner is absolutely devastating. But in the quiet of the night, a silent whisper is heard that says, ‘All is well; all is well. And that voice brings peace and unwavering certainty that death is not the end.  That voice brings the assurance that as surely as there has been separation, there will be joyful reuniting.

“Colleen, you shall go on.  There will be days of loneliness and nights of longing, but the sunshine of faith will shine again.”

Good night, dear Elder Maxwell.  We will miss you.