The Mantle of the Prophet Falls on Thomas S. Monson | Meridian Magazine

The Mantle of the Prophet Falls on Thomas S. Monson 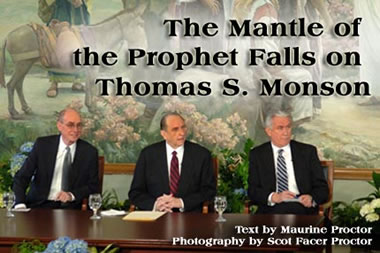 In a noisy political season when the decision about who will be the next U.S. president plays out in contention and mixed opinions, the next president and prophet of the Church of Jesus Christ was decided in a quiet, orderly, divine way – set by a pattern planned long in advance that assures that the new leader has been seasoned and trained and assumes responsibility ready to lead without a blip on the screen. 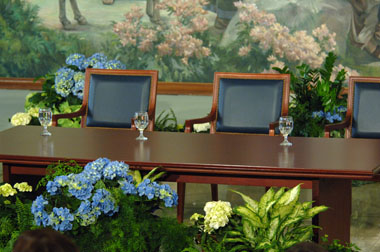 These three chairs were not vacant for long. Questions about the identities of the two new counselors in the First Presidency were answered as soon as the General Authorities entered the room.

Thomas S. Monson, who was first ordained as an Apostle and called to the Quorum of the Twelve in 1963 when he was 36, was ordained and set apart as president of The Church of Jesus Christ of Latter-day Saints, Sunday, 3 February 2008. 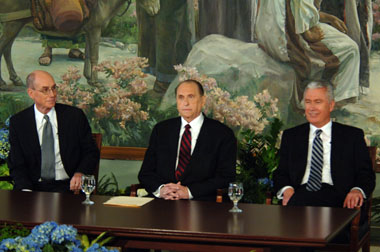 President Monson takes his new calling seriously, as this picture shows. He told reporters he immediately went to his knees when the mantle fell upon him.

He has called to serve with him in the First Presidency two he called “tireless and innovative workers” – President Henry B. Eyring, 74, First Counselor, and President Dieter F. Uchtdorf, 67, Second Counselor. President Boyd K. Packer was named as the President of the Quorum of the Twelve. 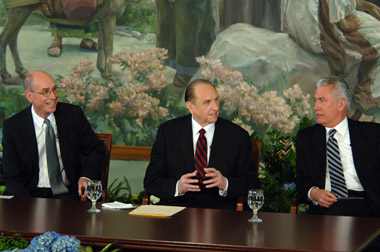 President Uchtdorf, who called himself “joyfully overwhelmed,” is the first member of the First Presidency to be born out of the United States in recent history. He said that President Monson had the gift not only to reach out to the one, but also to continents. “President Monson has such a feeling for the needs of individuals and the needs of all the world.”

He said that when people ask him if this is a global church, he responds, no; it is a universal church, not for any one nation or ethnic group. 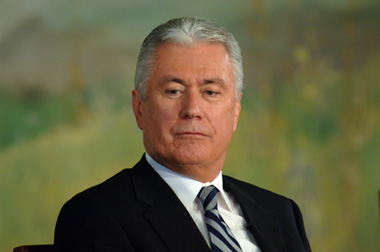 Indeed, President Monson worked under specific assignment with the Latter-day Saints behind the Iron Curtain for 18 years, and some have speculated that this might signal an upsurge in energy for the Church in Europe.

Speaking of his new position, President Uchtdorf said, “I know this call came from God, because human beings might have had a difficult time doing the same.” 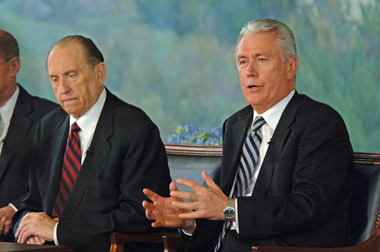 He laughed, “My wife said you don’t have to worry about your accent because more than half the Church speaks with an accent.”

President Uchtdorf, who has been senior vice-president of flight operations and chief pilot of Lufthansa German Airlines, has been a General Authority since April 1994, and was sustained as a member of the Quorum of the Twelve Apostles on Oct 2, 2004.

In choosing President Uchtdorf, President Monson has chosen “an international man and a very competent one.” 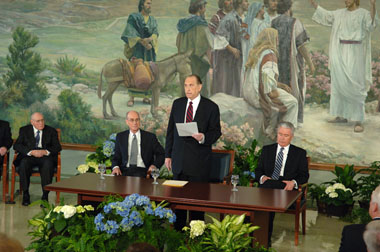 President Monson noted that President Hinckley’s passing “has affected all of us,” saying that he sat side by side with him for 44 years and met with him nearly every day. He said “our purpose was united” and “we worked together in complete harmony and in a spirit of love and cooperation.” Therefore, the Church shouldn’t expect any abrupt changes.

Even when pressed by a reporter to say what the first order of business would be for the new First Presidency, President Monson said the most urgent need was to give dignity and respect and adequate time to remember President Hinckley. “If anyone thinks he is going to be idle over there, you better think again,” he quipped. “He doesn’t know the meaning of the word idle.” 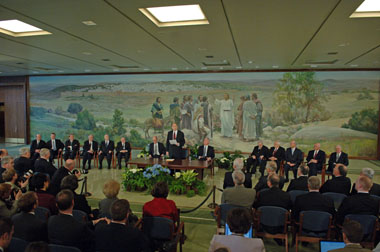 “I testify that the work in which we are engaged is the Lord’s work,” said President Monson, and signaled that as a Church, “we reach out not only to our own people but also to those people of good will throughout the world in a spirit of brotherhood and in the spirit of Jesus Christ.”

He commended the young people of the Church who “stand as beacons of goodness in a world of shifting values and standards.” 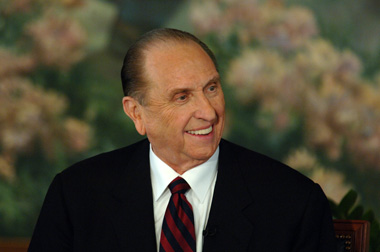 As President Hinckley before him, President Monson is a skilled communicator with a background in the media. He told reporters, “I believe in an open book and access to the media.”

In that spirit, the press conference was open for reporters to ask the First Presidency questions, and they ranged from how President Monson felt in learning that the mantle now fell upon him, to how the Church would respond to recent indications that the public still has some reservations about it, to the Church’s response to those who don’t follow the First Presidency’s stand on the marriage amendment. 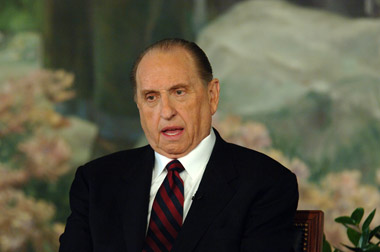 On his feelings when President Monson knew the mantle was falling on him: “I found most helpful to me was going to my knees, thanking my Heavenly Father for life, for experience, for my family and then directly asking him to go before my face, to be on my right hand, on my left hand, his Spirit in my heart and his angels around me to bear me up.”

On travel: “I do plan to travel. Traveling is difficult when you go for long stretches at a time.” He said, however, that he always comes back refreshed feeling like he’s accomplished something. “I’d like to testify that I’m on my knees before I go anyplace in this world asking that the Spirit of the Lord will go with me.”

On following President Hinckley: President Monson said it is “not difficult because he blazed the trail. We knew each other so well. I knew and testify afresh that he was the Lord’s prophet.” He said he was so grateful that the weather was so nice for his funeral.

On President Monson’s role in establishing the Genesis Group in 1971 and the Church’s plans to train in diversity and differences: President Monson said he took his role working with the Genesis group very seriously and he was with them when that great pronouncement was made [extending the priesthood to all worthy males]. “It was overwhelming to see the joy and see that God’s will had been done.” President Monson said he had the opportunity to do the first temple marriage for a member of the Genesis Group, and “I thought it significant that his name was Freeman. Free man – no limitations.

On his health: “I have always had good health.” President Monson said that some years ago he was found to have type 2 diabetes, which is under control. He said, “I still do a day’s work and half the night’s as well.” 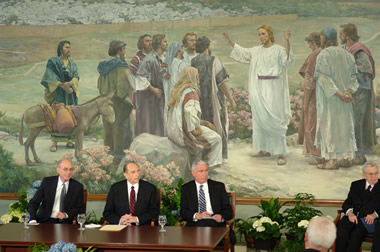 On education for women: President Monson said that today’s world is more competitive than it has ever been. Men and women need to get the type of education that will allow them to meet the exigencies of life.

Men and women need to be prepared for a vastly broader scope than ever before.

On members who disagree with Church leaders, for example, on the marriage amendment: President Monson said it would depend on what the disagreement was and whether the disagreement led to apostasy. If the disagreement is about something political, “there is room for people on either side.”

On why President Monson is so drawn to serve the one: “I think it came from my mother.” He said that his family lived on the west side of Salt Lake City where men who were traveling on the rails to find work in the East, often stopped at their home. “I saw my mother minister to those men, totally unafraid.” In fact, he said that she told them to write their mothers and tell them where they were. “That spirit carried on,” he said. In fact, he had 84 widows in his ward when he was a young bishop and each asked him to speak at her funeral. This wasn’t something he was certain he could do because he was out of the country so often. He started giving those speeches in 1950, and at the end of the year 2000, he had spoken at the funerals of all 84. 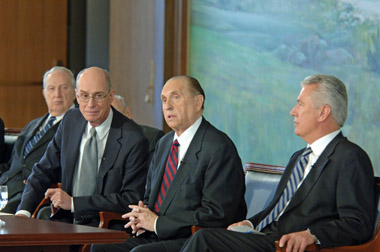 On bringing the Church into the mainstream since current press reports indicate that people still have reservations: “I think we should not be sequestered in a little cage.” President Monson said that we have a responsibility to be involved in the communities where we live and that rather than standing alone, we should all work toward a common goal. He noted, for example, that the Church has worked with the Red Cross and other groups. “I believe in that spirit.”

His thoughts on where the Church should go: “I think our young people live in a world of many challenges and they should be prepared to meet those and not be overwhelmed by them.” He said that sometimes the best answers that young people can give to the questions of life are found on their knees, calling upon their Heavenly Father.

On temple building: “There’s no doubt that the Church will keep going forward because the Church keeps going.” President Monson said he looks forward to being at Rexburg this coming weekend for the temple dedication with President Eyring. “I love to meet the people and be out among them.”

On the Perpetual Education Fund: “The perpetual education fund is one of the hallmarks of the administration of Gordon B. Hinckley.” He said that those who report to the First Presidency saw it is expanding and the recipients are able to pay back their loans. “It’s a miracle. That’s all there is to it.” He said that every day when he reads the obituaries (“we do that regularly, you know, to make sure we aren’t in it), he likes to see at the bottom the words “in lieu of flowers, contribute to the Perpetual Education Fund.”

On the less active: “Don’t give up. We need you. My purpose is to provide ways for we, as active members, an put our arms around less-active members and bring them back to the fold.” 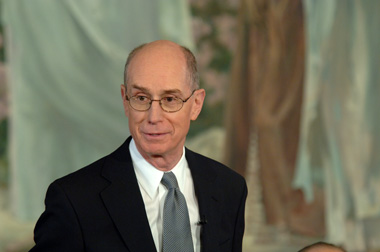 President Eyring said of President Monson, “I’ve had the chance to know him, his goodness, his great capacities, his love of the people.” He added “I know of his power to receive revelation and know what we should do.”

He said to President Monson, “I pledge you my total love and support.” 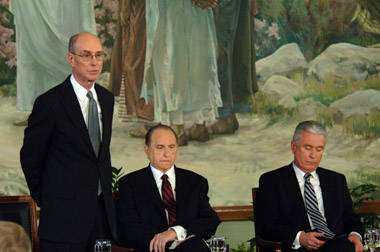 President Monson said that the quorums of the Church will give due attention to the present and the future, but not forget the past, “because the past is prelude to the future.” 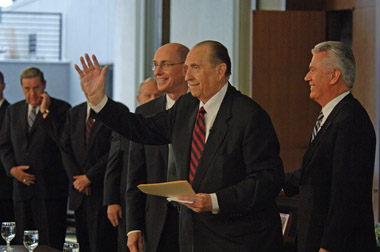