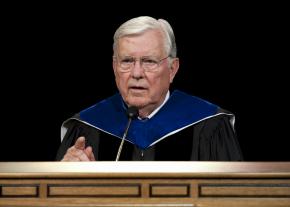 “In our interactions with others are we expecting always to have to defend ourselves?  If so, I think we need to make a course correction.” Elder Ballard said.  “It is inconsistent with where we are today as a Church and as a great body of followers of Jesus Christ.”

Elder Ballard referred to recent research that suggested Mormons can sometimes appear defensive to those who are not members of the Church. The study said that when Mormons are explaining their beliefs, they couch their language in terms that suggest they are expecting criticism.

Among the reasons for this type of reaction is the long history of persecution that Mormons faced during the early days of the Church, which included an extermination order from the governor of Missouri in the 19th century.

“That is now an indelible part of history.  You have heard the stories of hardship and sacrifice since you were a small child.  And yet this isn’t 1830, and there aren’t just six of us anymore.  Could part of the defensiveness that others sometimes see in us suggest that we still expect to be treated as a disliked minority, forced to flee to the West?”

According to Elder Ballard, the growth of the Church is increasing its prominence and bringing public attention. He noted the Church is now the fourth largest church in the United States and that Mormons are found in nearly every community.

“This prominence alone ensures that the Church is going to be talked about more and more, and that Latter-day Saints are going to find themselves in more and more gospel discussions,” he said.

In suggesting the tone Mormons might adopt in responding to criticism, Elder Ballard referred to the Church’s response to a cable network airing a dramatization of its sacred temple ceremonies earlier this year. The statement explained, “As Catholics, Jews, and Muslims have known for centuries, such attention is inevitable once an institution or faith group reaches a size or prominence sufficient to attract notice.”

He also explained that too often Mormons allow others to set the conversational agenda, and subjects such as the long-discontinued practice of polygamy become the focus.

“Whenever you are having a conversation about the Church, you should try to make this a point.  We follow Jesus Christ.  We try to live as He taught.  That’s the basis of our faith and our lives.  This is the strongest non-defensive position you can take.  You don’t have to defend or justify anything when you are basing your position on the teachings of the Son of God, and the fact that you are doing your best to keep His commandments,” he said.