Editors’ note: In the fall of 1830 it was clear to the early Saints that the Gospel of Jesus Christ must by taken to the Indian nations. Four intrepid missionaries were called by prophecy, namely: Ziba Petersen, Peter Whitmer, Jr., Oliver Cowdery and one Parley Parker Pratt. Their journey from Western New York would take them along the old Erie Canal to Buffalo, through the frontiers of the Connecticut Reserve (Northern Ohio) and on through a trackless wilderness to the far reaches of the United States-Western Missouri. Their work in the Ohio would change the course of the history of the Church and bring about moving the headquarters from Fayette, Seneca County, New York to Kirtland, Ohio.

In this excerpt Parley documents an experience he had being arrested and detained because of his work as a missionary in an area west of Cleveland, Ohio.

“Fifty miles west of Kirtland, we had occasion to pass through the neighborhood where I first settled in the wilderness, after my marriage. We found the people all excited with the news of the great work we had been the humble instruments of doing in Kirtland and vicinity. Some wished to learn and obey the fulness of the gospel–were ready to entertain us and hear us preach. Others were filled with envy, rage and lying.

‘We had stopped for the night at the house of Simeon Carter, by whom we were kindly received, and were in the act of reading to him and explaining the Book of Mormon, when there came a knock at the door, and an officer entered with a warrant from a magistrate by the name of Byington, to arrest me on a very frivolous charge. I dropped the Book of Mormon in Carter’s house, and went with him some two miles, in a dark, muddy road; one of the brethren accompanied me. (1) We arrived at the place of trial late in the evening; found false witnesses in attendance, and a Judge who boasted of his intention to thrust us into prison, for the purpose of testing the powers of our apostleship, as he called it; although I was only an Elder in the Church. The Judge boasting thus, and the witnesses being entirely false in their testimony, I concluded to make no defense, but to treat the whole matter with contempt.

“I was soon ordered to prison, or to pay a sum of money which I had not in the world. It was now a late hour, and I was still retained in court, tantalized, abused and urged to settle the matter, to all of which I made no reply for some time. This greatly exhausted their patience. It was near midnight. I now called on brother Petersen to sing a hymn in the court. We sung, “O how happy are they.” This exasperated them still more, and they pressed us greatly to settle the business, by paying the money.

“I then observed as follows: ‘May it please the court, I have one proposal to make for a final settlement of the things that seem to trouble you. It is this: if the witnesses who have given testimony in the case will repent of their false swearing, and the magistrate of his unjust and wicked judgment and of his persecution, blackguardism and abuse, and all kneel down together, we will pray for you, that God might forgive you in these matters.’

“‘My big bull dog pray for me,’ says that Judge.

“‘The devil help us,’ exclaimed another.

“They now urged me for some time to pay the money; but got no further answer.

“The court adjourned, and I was conducted to a public house over the way, and locked in till morning; the prison being some miles distant.

“In the morning the officer appeared and took me to breakfast; this over, we sat waiting in the inn for all things to be ready to conduct me to prison. In the meantime my fellow travellers came past on their journey, and called to see me. I told them in an undertone to pursue their journey and leave me to manage my own affairs, promising to overtake them soon. They did so.

“After sitting awhile by the fire in charge of the officer, I requested to step out. I walked out into the public square accompanied by him. Said I, ‘Mr. Peabody, are you good at a race?’ ‘No,’ said he, ‘but my big bull dog is, and he has been trained to assist me in my office these several years; he will take any man down at my bidding.’ ‘Well, Mr. Peabody, you compelled me to go a mile, I have gone with you two miles. You have given me an opportunity to preach, sing, and have also entertained me with lodging and breakfast. I must now go on my journey; if you are good at a race you can accompany me. I thank you for all your kindness–good day, sir.’ 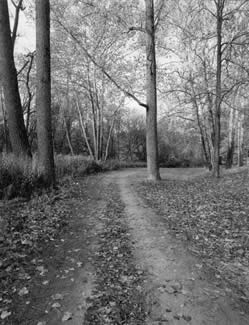 Woods about fifty miles west of Cleveland, Ohio, near where Parley escaped his captors and a large bulldog.

“I then started on my journey, while he stood amazed and not able to step one foot before the other. Seeing this, I halted, turned to him and again invited him to a race. He still stood amazed. I then renewed my exertions, and soon increased my speed to something like that of a deer. He did not awake from his astonishment sufficiently to start in pursuit till I had gained, perhaps, two hundred yards. I had already leaped a fence, and was making my way through a field to the forest on the right of the road. He now came hallooing after me, and shouting to his dog to seize me. The dog, being one of the largest I ever saw, came close on my footsteps with all his fury; the officer behind still in pursuit, clapping his hands and hallooing, ‘stu-boy, stu-boy–take him–watch–lay hold of him, I say–down with him,’ and pointing his finger in the direction I was running. The dog was fast overtaking me, and in the act of leaping upon me, when, quick as lightning, the thought struck me, (2) to assist the officer, in sending the dog with all fury to the forest a little distance before me. I pointed my finger in that direction, clapped my hands, and shouted in imitation of the officer. The dog hastened past me with redoubled speed towards the forest; being urged by the officer and myself, and both of us running in the same direction.

“Gaining the forest, I soon lost sight of the officer and dog, and have not seen them since. I took a back course, crossed the road, took round into the wilderness, on the left, and made the road again in time to cross a bridge over Vermilion River, where I was hailed by half a dozen men, who had been anxiously waiting our arrival to that part of the country, and who urged me very earnestly to stop and preach. I told them that I could not then do it, for an officer was on my track. I passed on six miles further, through mud and rain, and overtook the brethren, and preached the same evening to a crowded audience, among whom we were well entertained.

“The Book of Mormon, which I dropped at the house of Simeon Carter, when taken by the officer, was by these circumstances left with him. He read it with attention. It wrought deeply upon his mind, and he went fifty miles to the church we had left in Kirtland, and was there baptized and ordained an Elder. (3) He then returned to his home and commenced to preach and baptize. A church of about sixty members was soon organized in the place where I had played such a trick of deception on the dog.”

Copies of this new edition of the Autobiography are available through the Meridian/BYU Bookstore online.

1. It appears this brother was Ziba Peterson.

2. As evident in this dire circumstance, throughout his life Parley was especially adept at listening to and working with the gift of the Holy Ghost. He taught elsewhere concerning the attributes and workings of the Spirit of the Lord: “It quickens all the intellectual faculties, increases, enlarges, expands and purifies all the natural passions and affections; and adapts them, by the gift of wisdom, to their lawful use. It inspires, develops, cultivates and matures all the fine-toned sympathies, joys, tastes, kindred feelings and affections of our nature. It inspires virtue, kindness, goodness, tenderness, gentleness and charity. It develops beauty of person, form and features. It tends to health, vigor, animation and social feeling. It invigorates all the faculties of the physical and intellectual man. It strengthens, and gives tone to the nerves. In short, it is, as it were, marrow to the bone, joy to the heart, light to the eyes, music to the ears, and life to the whole being.” (Key to the Science of Theology, Deseret Book Company, Salt Lake City: 1965, p. 101.)

3. Simeon Carter (1794-1869) joined the Church in 1831, served on the high council in Missouri, served a three year mission to England (1846-1849), arrived in the Salt Lake Valley in 1850, and settled at Brigham City, Box Elder County, Utah where he remained faithful and true to the gospel until he died His younger brother, Gideon Carter, was killed in the Battle of Crooked River in October, 1838 (Papers of Joseph Smith, Volume 1, p. 479).