The Book of Mormon, a Latter-day Corrective | Meridian Magazine

The Book of Mormon, a Latter-day Corrective 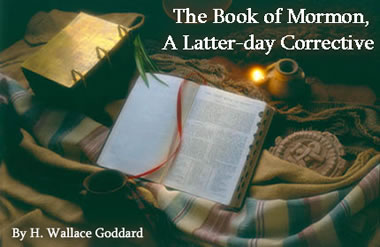 Editor’s Note:  This is the first of a series of articles that will focus on the Book of Mormon in response to President Hinckley’s challenge for church members to read that holy book before the end of the year.

“I offer a challenge to members of the Church throughout the world
and to our friends everywhere
to read or reread the Book of Mormon.”
(Gordon B. Hinckley, “A Testimony Vibrant and True,” Ensign, August 2005, p. 6)

In moments of spiritual pride or carelessness we may be tempted to believe that we, the Latter-day Saints, were given the Book of Mormon because of our chosenness. Or we may assume that we were blessed with this cherished wealth of revelation because of our unusual openness to the Lord’s mind and will.

Commonly we cherry-pick a verse here or there from that great book to fill in the gaps in our talks and lessons. How often do we go to the Book of Mormon to be taught new ways of thinking? Do we use the Book of Mormon to make our points or to make His? Are we willing to be re-educated by God? Since this great book was written and compiled with us in mind, it has special claim on our interest. It has special power to reform us.

But maybe seeking a dozen revolutionary truths in the Book of Mormon is far too unambitious. I listed almost that many in the first few minutes that I worked on a list. Maybe I should shoot for 100! But I will start with 12.

Right from the Start

In the very first chapter of the book, there is a striking — though subtle — challenge. Notice what the following statements have in common:

Wow! God is very serious about providing revelation to His children! How could anyone miss this clear theme? The same theme shows up repeatedly throughout the book. Enos was taught by God. King Benjamin was given the heart of his great address by an angel. King Lamoni went into a spiritual trance after being taught by Ammon. Alma the younger was confronted by an angel. The Brother of Jared saw God.

Does This Apply to Us?

Of course it could be argued that each of these was a special case. They should not be held up as a standard for us. After all, spiritual experiences are not intended as casual or routine entertainment. But that great book is filled with invitations to be taught from on high. Note Mormon’s explicit challenge recorded by his son:

“… have angels ceased to appear unto the children of men? Or has he withheld the power of the Holy Ghost from them? Or will he, so long as time shall last, or the earth shall stand, or there shall be one man upon the face thereof to be saved?

… wherefore, if these things have ceased, then has faith ceased also; and awful is the state of man, for they are as though there had been no redemption made” (Moroni 7:36-8).

Wow! Seeing angels is supposed to be a mark of faith! In today’s world any claim to entertaining angels is cause for confinement. Yet, from beginning to end, this guidebook to the last days is packed with invitations to be taught from on High. I wonder how many of us have entertained angels. Judging by LDS discourse, the experience seems woefully uncommon.

I am reluctant to answer yes. Do I dare to put myself in company with Enos and other greats? I have never seen an immortal with my mortal eyes. Yet … maybe we should entertain angels. Maybe many of us have entertained angels — even if unawares (Hebrews 13:2).

So the Lord has offered us a challenge in the Book of Mormon. Do not merely get your guidance from news people, textbooks, and pundits. Don’t count on American slogans and mindsets to advance you on the spiritual journey. Go to God and His heavenly messengers who stand ready to minister to us.

This seems to be fitting as a first challenge from the Book of Mormon. As a result of this discovery and reminder, I commit to be more mindful of heavenly guidance in the months and years ahead. As I continue my study of the Book of Mormon I expect to discover far more treasures.

President Hinckley has made us a remarkable promise: “Without reservation I promise you that if each of you will observe this simple program, regardless of how many times you previously may have read the Book of Mormon, there will come into your lives and into your homes an added measure of the Spirit of the Lord, a strengthened resolution to walk in obedience to His commandments, and a stronger testimony of the living reality of the Son of God” (p. 6).

We already feel the first fulfillment of these promises in our home.