Picking Flowers in the Minefields of Mortality | Meridian Magazine

Picking Flowers in the Minefields of Mortality 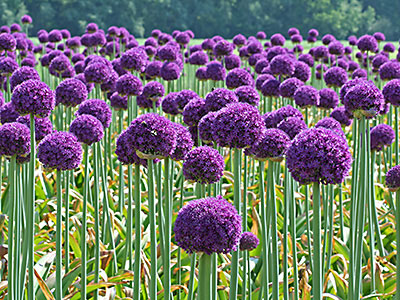 Thirty-three years ago I was with a tour group in the Middle East. One lazy afternoon when things were safer than they are now, our bus left Israel and crossed the border into Syria for a brief tour of the Golan Heights. The scenery was spectacular. We enjoyed the contrast of green land and blue sky and white clouds, and talked about the conflicts that had raged in this area throughout much of recorded history.

After a while we noticed in the distance a purple haze covering the ground. As we drew closer, we found ourselves next to a field of globe-shaped purple flowers at the end of long stems. There were many acres along one side of the road, covered with what I now know was purple allium.

With what amounted to a single voice, we called to the bus driver to stop. The flowers, about softball sized, and each composed of hundreds of tiny purple blooms, created a breath-taking scene. Most of us were anxious to explore more closely and to pick a handful or two of natures remarkable handiwork.

The bus driver obediently pulled to the side of the road and opened the door. Our Israeli guide smiled as he watched us scurry across the road. When we arrived at the edge of the field, we found that it was surrounded by a barbed wire fence, not terribly high and partly obscured by the weeds along the highway, but clearly quite new. We slowed our rush long enough to notice that there were signs hanging from the fence, and spaced about 20-30 yards apart. The signs alternated between English and what was probably Syrian. We could read the English easily enough: DANGER! MINEFIELD.

The signs stopped us instantly. Not a single person from the bus climbed the fence to collect floral arrangements. The flowers had not changed. They were no less enticing and lovely, but something had changed. We knew that in spite of the beauty before us, the adventure of picking those flowers was life-threatening.

We asked our guide for clarification, and he told that during recent battles, Syrian forces had advanced across this area to attack Israel. But Israeli forces drove them back, and in this area, as they retreated, they had buried many mines in an effort to slow the pursuit of their enemies.

When the battles were over, it was inconvenient to allot the manpower and time to find and dispose of those mines. Instead, the area was fenced and the flowers were planted. How they were planted, I do not know, but certainly not by a Syrian farmer with a spade. Our guide thought they might have been sown by helicopter.

I have reflected on that experience many times, because it taught me an important lesson. Prophets, other leaders, and scriptures hang signs much like the ones we saw in Syria, on fences near the minefields of mortality. But we are not always as wise as my fellow-travelers on the Golan Heights. There are those among us who see the beauty or excitement of the flower gardens and climb the fences regardless of the danger. 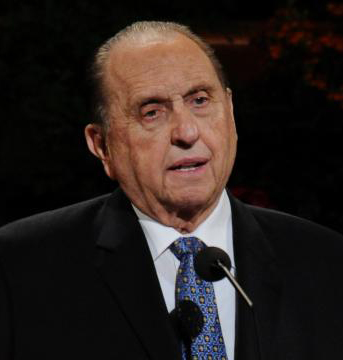 As I have listened to the instructions of prophets, seers, and revelators, along with local leaders, I have been able to identify some of those fields where the mines are hidden.

I am sitting at my computer as I write this, and I am aware that there are many sites within a fingers reach that have such warnings on them: Danger! Minefield.

As I sit before the TV from time to time, surfing the channels to find something entertaining, I remind myself that inspired leaders and the Holy Spirit have hung such signs just below the screen: Danger! Minefield.

Movies, magazine and book racks, libraries, late nights on dark roads in parked cars, dating and steady-dating at too young an age, extra-marital flirtations, many kinds of electronic media, Sabbath sabbaticalsso many places are decorated with those signs: Danger! Minefield. And even though there are enticements and excitement across the fence, the danger of such places and activities is much greater than the danger of the allium fields in the Golan Heights. The Lord warned: “And fear not them which kill the body, but are not able to kill the soul: but rather fear him which is able to destroy both soul and body in hell” (Matthew 10:28).

Why arent the fence climbers terrified of such adventures when the signs have been hung so clearly and so often? I suspect that many of them do what Corianton, the son of Alma did, and begin climbing while “boasting in [their] strength and wisdom” (see Alma 39:2), believing that they are wise enough or tough enough to avoid or to deal with any little spiritual explosions that might occur.

Certainly Corianton felt that way when he ignored the signs and climbed the fence to talk with Isabel. We can almost hear him saying to his companion who had just pointed out the minefield sign, “I am the prophets son, for goodness sake. I am capable of handling this.”

When Jesus, just before his arrest, warned the apostles near the Garden of Gethsemane that they would all be offended because of him that night (see Matthew 26:31), Peter boasted and “said unto him, Though I should die with thee, yet will I not deny thee” (Matthew 26:35). Yet that very night, Peter ignored the warning sign hung by the Savior and went to the most dangerous possible place for him in Israel, Caiaphas palace, and before the morning came, he had denied knowing the Savior three times.

We cannot take such chances. When we encounter those signs: Danger! Minefield, we cannot rely on our strength and wisdom and start climbing fences. We must turn away. The Lord has planted flower gardens enough to fill us with joy for all eternity. The Psalmist said it this way: “In thy presence is fulness of joy; at thy right hand there are pleasures for evermore” (Psalms 16:11).

Who would want to trade that for a handful of purple flowers?