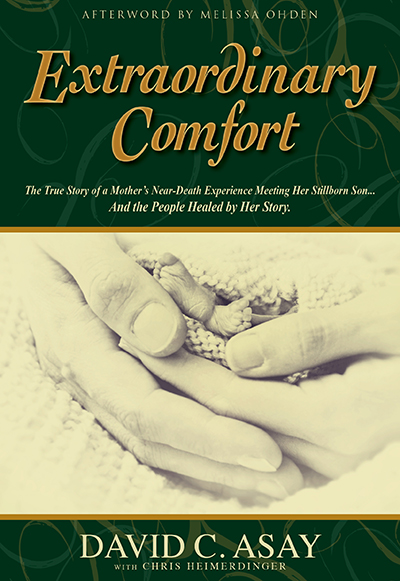 A true story that will comfort any mother who has ever lost a precious, unborn child

Millions have enjoyed the story of a young boy’s visit to the afterlife in the hit movie “Heaven Is For Real”.  A new book cites the similarities of that account to the true story of a mother whose own near death experience came at the other end of her life span.

“My Name Is Shawn and I love you so much,” were the first words Mary Lou Asay heard from the handsome young as he approached and wrapped his arms around her, then kissed her on the cheek.  Shawn explained that he was her son, the child she had lost so many years ago-before he was born.  Mary Lou was in Heaven…literally.

Author, Dave Asay has completed a powerful new book titled “Extraordinary Comfort”.  It is the true story of his mother’s near-death experience where she met the son she lost many years earlier to stillbirth.

Dave’s mother had been in and out of the hospital numerous times in the last few years as a result of a range of health issues, including cancer and diabetes.  However it was soon apparent to the family that this occasion might be different.

“When the call came in that his mom was not expected to live, David made immediate arrangements to fly the 2000 miles to be with his mother and family.”

A day after arriving, his mother fell into a deep coma and the prognosis was grim as the doctors prepared the family for the likelihood that she would not survive long.

However, after a day and a half, she startled everyone gathered in her room when she suddenly sat straight up in bed with a glowing smile and stated;  “Oh, I have five beautiful sons.”  All the family were happy that she had come out of her coma, but were confused because there were only four boys in the family.  David’s sister Becky said, “well, mom you have five daughters, but only four sons.”  Mom quickly responded, no, I have five beautiful sons.  David’s Dad then lovingly said, well honey, we have David, Randy, Larry and Chris – those are our four sons, who is the fifth son?  Without hesitation and as her eyes filled with tears, she said his name is Shawn.  He is the son we lost to stillbirth many years ago.  We stood there stunned as no one in the family other than my father and oldest sister had any knowledge that mom had lost a child.

Mary Lou also informed David’s sister Connie, that she had also met Michael, the child that Connie had lost several years earlier.  Mary Lou described these people not as babies, but as men in their prime.  Or as she put it, “Somewhere in their mid to late twenties.”  She stated that this was the age of basically every family member she met during her heavenly sojourn, including parents and grandparents.  At the time of the event David took many notes and another brother even audiotaped an interview with Mary Lou about what had occurred.  She passed away less than two months after her sacred experience.  Never the less, it took David more than a decade to organize it into a rough manuscript.

He finally enlisted the help of long time friend and author, Chris Heimerdinger to help finish a book about this near-death experience in the most revealing and accurate way possible.

David understands that the implications of his mother’s experience are enormous.  “It suggests that any mother who loses a child to stillbirth or miscarriage may have the opportunity to meet and know them in the next life.

Co-author, Chris Heimerdinger explained, “I was attracted to Dave’s project because of it’s purity and simplicity.  It doesn’t try to teach anything particularly new in the field of near-death studies.  It just beautifully reconfirms one basic principal about the eternal nature of families and the sacred importance of even the weakest among us – the unborn child.”

David also doesn’t claim that his book provides all the answers for what we can expect as we pass through the veil of death, but he firmly believes the reason his mother was “allowed” to return was to tell others of her experience in order to comfort the grieving hearts of so many mothers (and fathers) who have experienced the terrible pain of losing a child in the womb.

Extraordinary Comfort not only provides thought-provoking details about the near-death experience of Dave’s mother, but he ties it together with heart-wrenching and heart-warming experiences from his own family that reveal what his mother’s visit” taught him about families and the precious gift of human life.