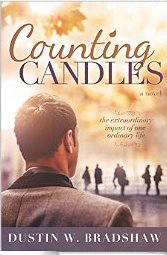 James Smith in Counting Candles sees himself as an ordinary man who never does anything special. As his fortieth birthday approaches he’s saddened by the realization that his life is half over and he’s never done anything great. He hasn’t achieved the career or financial success his old college roommate has. He’s never given his wife the things he thinks she deserves; in fact he feels responsible for her having to return to work. He’s never won an award. Even the Little League team he coaches seldom wins a game.

James has a knack for encouraging people. He says the words that inspire his college roommate to stop partying and make something of himself. He gives his wife the freedom to choose what to do with her life. He encourages the smallest child on his baseball team to believe he can keep up with the older, larger boys. His secretary, the doorman at his office building, a waitress, the old man next door, James’s sister, and many others share their stories of the small kindnesses from James that have made a difference in their lives. As the birthday approaches, his wife decides to give him a surprise party and present him with a book containing letters from as many friends, family members, and business contacts as she can find.

Anyone reading Counting Candles is likely to compare it to It’s a Wonderful Life, that long time seasonal favorite of an ordinary man who becomes depressed because of his failure to achieve some grand success in life. James Smith is a character much like George Bailey, but to be honest, I like James better than George. To me he’s more real. Bradshaw does an excellent job of creating characters and in short vignettes demonstrating their contact with James and showing to what that contact leads the character to do to change his/her life for the better.

“Feel good” books, such as this, are not known for powerful plots or a great deal of action. Their strength is in their message of hope, love, or outlook on life – sometimes referred to as scattering warm fuzzies. Counting Candles points out that each person has opportunities to make others feel better about themselves, to give encouragement, and do small acts of charity that can change lives for the better. It suggest that helping others is of greater worth than achieving awards, monetary compensation, or other worldly recognition.

Dustin W. Bradshaw has a rural background and is now a foreign service officer for the United States Department of State. He currently lives in Manila, Philippines, and will soon be posted to Istanbul, Turkey. His wife accompanies him wherever he serves.