LDS Fiction: Hiding from the Law IN PLAIN SIGHT 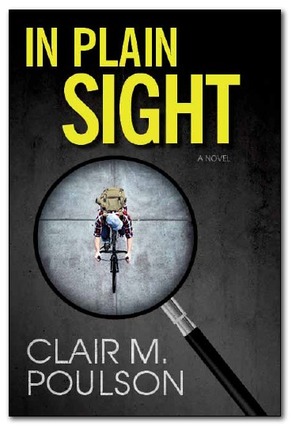 Accused of a crime he didn’t commit, Donte Noble takes to the road to avoid a cop convinced of his guilt and the former fiance who accused him of murdering her brother. Traveling the highways on a bicycle, pulling a small cart holding his dog, Donte hides In Plain Sight.

After three months of using an alias and avoiding personal conversations, Donte has a strong impression he can trust a man who gives him a ride across a section of the hot Nevada desert. He tells the man, Clive, his real identity and the little he knows about the murder. Clive is a murder mystery writer who decides to try his hand at solving a real crime. Clive travels to Donte’s hometown where he begins an investigation with the help of Donte’s sister, Sara.

Sara is not only trying to prove her brother’s innocence, but is facing a sticky situation with a boss who wants to date her, a jealous ex-wife, and the persistent attention of the murder victim’s brother. She doesn’t know where Dante is even though he calls her at frequent intervals to let her know he’s alright.

Clive isn’t the only one to whom Donte reveals his real name. He befriends two young women, one of whom suffers an acute appendicitis attack. His intervention and insistence that she go to the hospital saves her life, but also attracts the attention of a mysterious man who seems to be trying to locate Dante. The other woman, Chey, stirs strong feelings in Donte, making him realize all that was wrong with his relationship with his former fiance. If he didn’t need to keep moving and avoid dragging someone else into the real killer’s attention, he’d like to see where their friendship might lead.

Poulson adds the small town dynamics of interrelated families, political, and business relationships in this suspense novel. The action is fast and he shows a personal knowledge of the vast distances in the West and the cooperation between law enforcement agencies. He doesn’t reveal a lot of detail about his characters’ background and the events that have formed their character, but gives more of a snapshot view of them in their current situation. Still many of his characters seem like the ordinary people we meet every day who are good people, doing their best, that become caught up in serious situations by deceptive, dishonest people.

Clair Poulson has a large following of mystery/suspense fans who appreciate the rural flavor and small town characters in his books. He brings a solid law enforcement background to his writing from the twenty years he spent as a law enforcement officer then more than twenty years as a justice court judge for Duchesne County. He also farms and ranches along with helping his son in his grocery store. He and his wife, Ruth, have five children and twenty-three grandchildren. The varied positions he has held in the Church include among others that of Bishop, high councilor, scoutmaster, and he currently serves as Gospel Doctrine teacher.