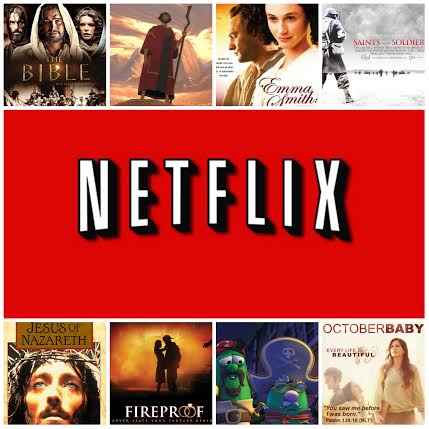 So let’s say it’s Sunday. You’re back from church and you’d like to spend this “day of rest,” you know… resting. Maybe you’d like to curl up to a movie, but you’d like to keep the feeling you got from scripture study and church attendance. If you’ve got Netflix Streaming, I’ve got you covered! Here are 15 terrific movies and TV series for Sunday viewing found on Netflix.

Please note that if you’ve got Netflix on your TV, some of these won’t appear on your screen unless you “search” for them by title. Also, as some of these have no MPAA rating they are classified as “not rated” and can only be watched if your Netflix parental controls are off, even though the films are wholesome.

THE BIBLE (TV-14, 2013) – The History Channel’s ambitiously cinematic miniseries covers the highlights from Genesis to Revelation. Terrific production values, solid acting, and sincere storytelling make this perfect for Sundays. Heads up: it earns the TV-14 rating with a fair amount of blood and violence, true to the context of the stories.

EMMA SMITH: MY STORY (PG, 2008) – This excellent movie is made by the same filmmakers and actors as the Temple Square movie Joseph Smith: The Prophet of the Restoration. It tells the same story, but from Emma’s perspective. Katherine Nelson is excellent in the title role. Inspiring and moving, as well as informative as it tactfully addresses the subjects of plural marriage and Emma’s life after Joseph’s death.

FIREPROOF (PG, 2008) – Beautiful Christian film about a firefighter who turns his life over to Christ and humbly sets out to save his marriage. This is a touching love story, between both man and wife as well as between God and His children. There are some tactfully-handled mature elements (the husband abandons an implied-but-not-shown pornography habit as part of his repentance and a wife considers having an affair).

HEAVEN IS WAITING (PG, 2011) – Originally released as Midway to Heaven (based on the novel of the same name), this vaguely LDS romantic dramedy was filmed in Utah. Curt Doussett stars as a grieving widower who reluctantly starts dating again just as his 20-something daughter gets engaged to Kirby Heybourne. Sweet and funny, with beautiful UT scenery. Co-starring my KJZZ Movie Show co-host Melanie Nelson.

JESUS OF NAZARETH (Not rated, 1977) – For many this is the definitive film version of the life of Christ, covering His life with detail that no other film has matched. That’s because it’s technically a six-hour miniseries, not a movie. This is terrific stuff, with Robert Powell making for a superlative Jesus. Not rated, but would be PG-13 for the scourging and crucifixion.

JOSEPH: KING OF DREAMS (TV-PG, 2000) – Dreamworks Animation produced this TV movie which chronicles the Old Testament story of Joseph in Egypt, making it a prequel of sorts to their own Prince of Egypt. While not as impressive as that film, it’s still a good one to watch with the kiddies.

THE LETTER WRITER (Not rated, 2011) – This is a great little movie that debuted on BYU-TV, about a teenage girl whose friendship with a lonely old man helps her better comprehend her worth to God. Directed by Christian Vuissa (Errand of Angels, Silent Night). Not rated, but would be rated G.

OCTOBER BABY (PG-13, 2011) – Well-made and well-acted Christian film about a young woman, who survived an abortion attempt as a baby, setting out to find her real mother. Thought-provoking, faith-promoting, and incredibly heartfelt. The PG-13 rating is for frank discussions about abortion and out-of-wedlock pregnancy, but there’s nothing offensive here in terms of content.

THE PASSION OF THE CHRIST (R, 2004) – Many Latter-day Saints avoided this because it’s rated R and very violent. I also generally avoid R-rated movies because of President Benson’s counsel. So why did I see this one? Because of Moroni 7:16, which reads, in part: “Every thing which inviteth to do good and to persuade to believe in Christ is sent forth by the power and gift of Christ; wherefore you may know with a perfect knowledge it is of God.” For all his personal faults, Mel Gibson was sincere in his love for Jesus in making this film. It’s evident in every frame. The movie is terribly graphic and bloody (I had to close my eyes during the scourging) and some of the dramatic liberties don’t work, but it’s amazingly acted (Jim Caviezel is the best movie Christ I’ve ever seen), stunningly-crafted, achingly moving, and spiritually uplifting. That said, if you want a toned-down version of this, The Bible miniseries is a great alternative.

THE PRINCE OF EGYPT (PG, 1998) – Dreamworks Animation’s take on the story of Moses and the Exodus takes dramatic license, by its own admission, but it’s an incredible work of art. The animation is phenomenal and the music may bring you to tears. I really love this film.

THE ROBE (Not rated 1953) – Technicolor religious epic is a Hollywood classic about the Roman soldier who wins the robe of Christ at the foot of the cross and ultimately comes to believe in Jesus.

Cheesy at times, to be sure, but it’s remembered for a reason. Solid flick.

SAINTS AND SOLDIERS (PG-13, 2003) – Director Ryan Little’s excellent World War II film finds a Mormon sharpshooter crossing wits with an atheist medic as their band of soldiers tries to survive behind enemy lines.It sounds heavy-handed, but this well-produced and well-acted movie is subtle and compassionate, allowing all of its characters to have flaws, virtues, and humanity. Some terrific action as well.

SAINTS AND SOLDIERS: AIRBORNE CREED (PG-13, 2012) – Although it deals with the same era and similar themes this isn’t really a direct sequel to Saints and Soldiers, as none of the original characters return. The religious character is Catholic this time, not Mormon, so the film has a different perspective. Three American para-troupers try to help French allies in battle. For most of the running time the movie is simply good, but the ending is great, packing a genuine emotional wallop and a delivering a message of compassion that inspires. A third Saints and Soldiers film is currently in production.

UNCONDITIONAL (PG-13, 2012) Powerful Christian film about a woman who contemplates everything from revenge to suicide after her husband is murdered in a mugging, but ultimately finds peace and the ability to forgive through her relationship with God. Rated PG-13 for mature thematic elements, but has no offensive content.

VEGGIE TALES (TV-Y) – Netflix has five different episodes of this very funny Christian animated series, plus the feature-length adventure The Pirates Who Don’t Do Anything. Great for kids and adults who need an innocent laugh.

Jonathan Decker is a licensed marriage and family therapist who does online webcam sessions (visit his web site). He reviews Hollywood films from a Latter-day Saint perspective at www.mormonmovieguy.com. Jonathan’s book, 250 Great Movies for Latter-day Families, is now available

The Saratov Approach American Mormon Joseph Smith: Prophet of the Restoration are all on Netflix at this time.