Ordain, or Else? | Meridian Magazine 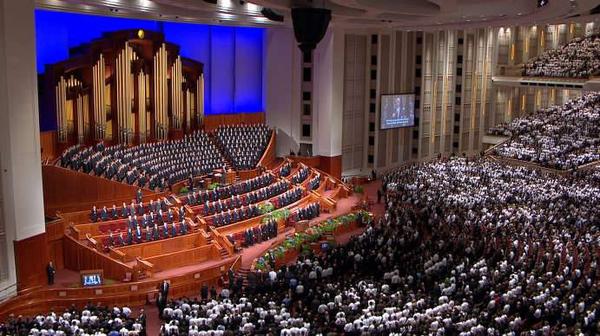 To receive a free subscription to Meridian, click here.

I confess that the logic behind the strategy of the Ordain Women movement escapes me. Last week through Jessica Moody of the Public Affairs Department, the Church issued a letter  to leaders of the group refusing them tickets to the April General Conference Priesthood Session April 5.

It wasn’t a simple refusal but was quite specific about the demand for female priesthood ordination. The letter said, “Declaring such an objective to be non-negotiable, as you have done, actually detracts from the helpful discussions that church leaders have held as they seek to listen to the thoughts, concerns, and hopes of women inside and outside of church leadership. Ordination of women to the priesthood is a matter of doctrine that is contrary to the Lord’s revealed organization for His church.”

The Church is acknowledging three important ideas in this paragraph: 1) The women are non-negotiable in their demands. That means they intend to continue their protest and agitation until they get exactly what they want. Would a letter refusing their request from President Monson stop them? Non-negotiable suggests otherwise. 2) This is on a matter of doctrine contrary to the Lord’s revealed organization for the Church. So, the letter states that we are not merely talking about a cultural practice or incorrect tradition, but a matter of core doctrine. 3) And last, that the work of Ordain Women “actually detracts” from discussions Church leaders are already having to acknowledge and understand women’s thoughts and concerns.

Could a letter be any more clear? It was saying “cease and desist.” Stop this. You are hindering the work.

Yet the Salt Lake Tribune reported Ordain Women founder Kate Kelly’s response: “We are disappointed that we weren’t granted tickets,” says Kate Kelly, one of the founders of Ordain Women. “But it is a positive step that public affairs is responding to us, indicating that one day maybe the higher authorities will be able to hear our concerns.”

What a twist for Kelly to interpret this as a “positive step.” She is suggesting that a dialogue has been opened, when, in fact, all she has done is been refused and quite soundly. She is also taking the ploy that somehow the Public Affairs Department of the Church is neatly separated from the “higher authorities” as if such a letter were issued without their consultation and stamp of approval.

She’s smart enough to know that public affairs departments of any organization do not create their own policies-and this is particularly true in the Church. The Church is not going to allow a statement to become public (as this letter, published on the Church’s own website became) without it being the express reflection of those top leaders in the organization.

She is playing a game with us when she tells the press that dialogue has now been opened and that one day “higher authorities will be able to hear our concerns.” There is no doubt that higher authorities are already well aware of her and her movement-and they are already giving clear indications of where they stand.

What she is really telling us is that her organization doesn’t intend to stop-no matter what, but she is couching it in a way to appear loyal and faithful. She told the press, “We’re going to continue to ask and knock as we are told to do in Matthew 7:7. The only thing we’re going to demonstrate is that we’re ready for the blessings and responsibilities of the priesthood. We’re going to continue to gather, ask and to knock as planned.”

It reminds me of the term “doublespeak” which is “language that deliberately disguises, distorts, or reverses the meaning of words. Double speak may take the form of euphemisms (e.g., “downsizing” for layoffs, “servicing the target” for bombing), in which cases it is primarily meant to take the truth sound more palatable. It may also refer to intentional ambiguity in language or to actual inversions of meaning (for example, naming a state of war peace’). In such cases, doublespeak disguises the nature of the truth.”

I hope Kate Kelly and her cohorts are faithful as they claim, but to fire up a movement when the Church, through the public affairs department, has expressly asked them not to is bewildering and a harmful choice for those who call themselves faithful. Is this the fruit of the faithful? I hope those who are following this plan will reconsider.

What if we all started movements to change points of doctrine we disliked or merely questioned. What if there were one group clamoring for a 5% tithing and another who wanted to allow everyone into the temple-not just those with recommends? What if there were a group who advocated the repeal of chastity and another who thought abortion should be moral because childbirth is inconvenient? We would become a church of fragments and opposing persuasions, each walking in his or her own way instead of a people united with one heart fixed on the Lord’s true doctrine.

The Church’s letter also said that if Ordain Women does demonstrate again, that the group move its activities off of Temple Square to the adjacent free-speech zones.

Kelly responded, “It’s striking they would direct us to the free-speech zones. We feel as faithful, active Mormon women we have nothing in common with people who oppose the church and want to protest against it. The church is its members. We aren’t against the church, we are the church.”

This paradigm that “we are the church” is also flawed. As a citizen of the United States, I am part of the People that the government must account to. With others in my country, I chose the elected officials and they are accountable to me. “We the people” are the decision makers. We are the nation.

The Church, however, operates on a very different foundation. It is the Lord’s. He chooses his servants, the prophets, and they are accountable to Him. God allows us the enormous privilege and responsibility to participate with Him in His Church and in helping to bring to pass His work which is to bring to pass “the immortality and eternal life of man.”

He invites us to participate in work for the living and the dead in innumerable ways, which is a kindness to us, but, nonetheless, it is His Church, His covenants, His direction, His sacrifice that is at its heart and center. While we sustain leaders with our hands raised and our hearts dedicated, we do not vote on doctrine as so many other churches do. We do not determine truth by consensus.

Ye Take Too Much Upon You

When the Children of Israel were making their way to the Promised Land, Korah and 250 of his cohorts described as “famous in the congregation, men of renown” “rose up before Moses” in a willful mutiny and bid for power, including the priesthood (Numbers 16).

They specifically told Moses, “Ye take too much upon you, seeing all the congregation are holy, every one of them.” It is clear from The Joseph Smith Translation that Korah actually coveted Moses’ high priesthood.

What is more clear is that God saw this not as just a rebellion against Moses, but against Himself. In asking for power and priesthood, “These men have provoked the Lord” (Verse 30) and the earth opened up and swallowed them. Obviously, these men had taken too much upon them in asking for the priesthood.

I believe the Lord when He says regarding His doctrine, “whether by mine own voice or by the voice of my servants, it is the same” (Doctrine and Covenants 1:38).

I believe Him when He says: “seek not to counsel the Lord, but to take counsel from his hand.” To take that further, I am certain “that he counseleth in wisdom, and in justice, and in great mercy, over all his works” (Jacob 4:10).

I believe that “Satan doth stir up the hearts of the people to contention concerning the points of my doctrine” (D&C 10:63)

It is my hope those women involved in the Ordain Women movement, however tiny the number, won’t ultimately find themselves at odds with their covenants or their faith. Yet it is hard to be of one heart with the Lord or His prophets, if you choose to defy their counsel, assuming you know better.

Skeptical: It is hard to read the "tone" of comments when we don't see the faces or hear the inflections of the voice. Most are, at the very least, disappointed and dismayed at people demanding "rights" that only God can give. Is it rights, power, or authority these women want? In any case, "demanding" any three of those is what is un-Christlike in tone and purpose. Most have opinions about this, and that is all right to have an opinion. Satan would have us be afraid to give our opinion (civil or otherwise) to each other, because then we would be cowardly and afraid to stand for what is right. We are to stand for what is right, in love AND truth. No one called these ladies names. No one told them to go to wherever. They just told their feelings and thoughts. The Pharisees that Christ condemned had commercialized the temple, changed the law to fit their agenda, were government appointed leaders who were the "hirelings" Christ spoke of and didn't teach judgement in the Law of Moses. Commenters on this blog are merely expressing opinions which are rightfully theirs.

I read the harsh, condescending, self-righteous, holier-than-thou and frankly un-Christlike tone of most of these comments, and I think to myself that I don't really want to be associated with a Church that produces people who are so dismissive and snide toward others with a different point of view. Christ reserved his harshest words for the Pharisees - and there seem to be quite a few of those here.