Gilbert Temple: The Best Miracle is Going to Happen 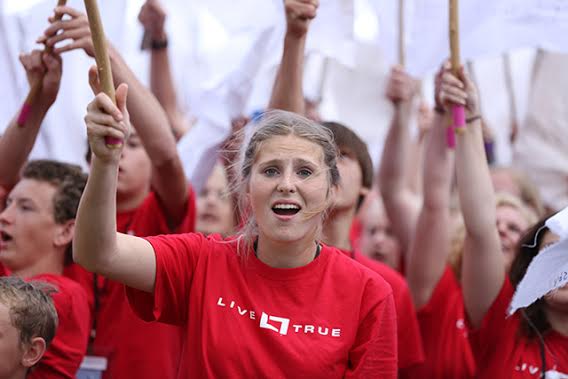 You have to be brave-and maybe a little crazy– to chair and direct the youth cultural celebration for a temple dedication. That’s why when Rosanne Tidwell’s friend called her “the bravest woman I know”, nobody disagreed.

Rosanne recently chaired and directed the Gilbert Arizona Temple Cultural Celebration and this is what she had to consider: 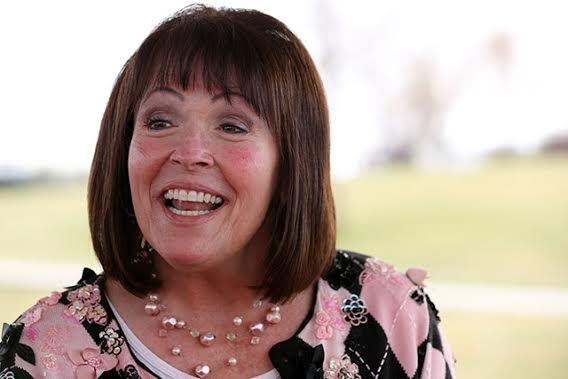 If you’re Rosanne, you start ten years early-before there is even a hint in the air that there will be a Gilbert temple.

Ten years ago she was called to direct a dance festival for 4,000 kids in Gilbert. For two nights, she couldn’t sleep because the inspiration for the script flowed so freely. “This is unbelievable,” she kept saying, as she jotted down notes and captured ideas.

Then the dance festival didn’t happen, but she was so certain that she had been given this creative impulse from heaven, she thought, “Something is going to happen. This experience didn’t happen for nothing.”

Every year she set her script in to the Church wide play writer’s contest, and every year nothing happened-until one day she received a call from Michael Magleby from the Church office building who set up what would be a three-hour conversation to tweak the show. He said, “We hope there will be a Gilbert temple and we hope you’ll turn this in as the script.”

Of course, the Gilbert temple arose where a field of grass had been, she was chosen to direct the show and with others she created a script about Heroes, those who have stood up for their faith and stood apart from Babylon through the ages. The theme emblazoned on every t-shirt was “Live True.” 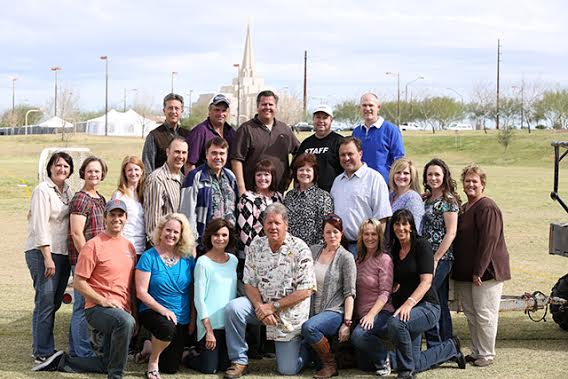 “The most incredible people [she had] ever met” were assembled to pull it off. “They do 110%. They do everything you ask-and more,” she said. The Lord has been holding each of us in the palm of his hand. The Lord loves these temple celebrations. He loves this youth.” Those incredible people were many, giving thousands of man hours. 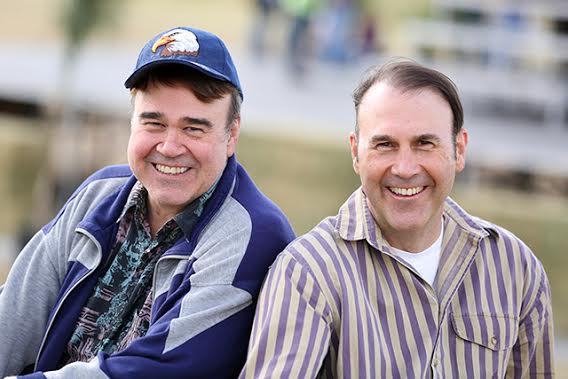 Robert Madsen, who Rosanne calls “a genius songwriter” had been on board all ten years since the earliest days of creating a show. At first Rosanne was writing parodies to popular songs, but as she sent him emails about her plans, he began to replace those parodies with original songs.

Daniel, of the lion’s den fame, was in the original story, and Robert said, “I felt the heart of the story was Daniel’s declaration of faith, in the face of his death sentence. That is where the song, “I Choose this Day” came from.

Robert said it was “amazing to see that songs just came to him that were tailor-made for the celebration. It is very difficult to write a good song,” Robert said, “but I felt a confidence that came from the Spirit. In the process, many times it was scribbling down as fast as you can, the idea-and then going back to fill in the technical.”

His brother, Richard, worked on the script with Rosanne. For him, too, “the excitement was palpable.” 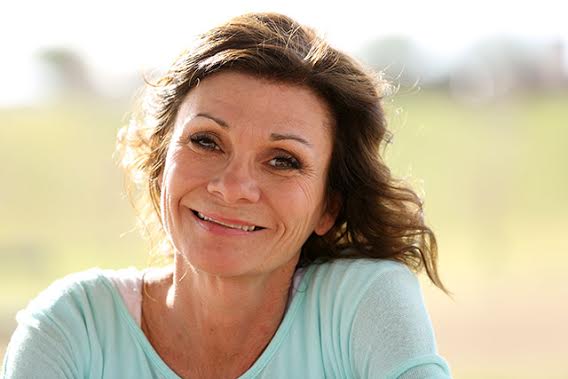 Melenie Reynolds who worked with the choreography brought in a friend from Utah who had worked both on the Salt Lake City Winter Olympics and the Stadium of Fire. She had worked on choreography for a crowd, but confessed to Melenie that she had never had more than 1800 on a field together dancing before. 12,000 was unthinkable.

They decided to grid off the field in color-coded squares where 10 kids could dance. They had to plot carefully where each youth would stand and where they would sit. How much space would each one take as they kicked their legs and swung their arms? The colored grids were to give the kids their own spot to come to on the field as long as 3 football fields.

Melenie brought in an engineer with expertise in the time it took to move people through spaces to calculate how long it would take to simply move 12,000 bodies on and off a field. Could they do a parade movement with all 12,000 in 3-1/2 minutes? The engineer calculated and gave the answer-which was no. With that number and time frame, you could only have 200 parade.

Such details to pin down. Such logistics to consider. Rosanne, for instance, calculated that if all 12,000 kids were dropped off at the entrance, and each car held five kids, it would take 7-1/2 hours to unload them. They had to go to Plan B. 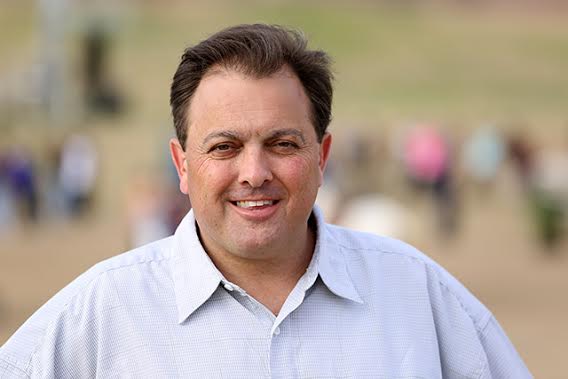 Jason Barney, musical director, had to pre-record every song in a way that made his group of 100 sound like 12,000 and then layer the tracks together so that they wouldn’t overwhelm the actual singers on the field, but would still be a support.

“We are doing things with this youth celebration that we never thought we could do,” Rosanne said. “We have fire dancers when Shadrach, Meshach and Abednego are thrown into the fire. Captain Moroni is going to come riding in on a horse. The other venues we tried would not let the horse in the show.

President Henry B. Eyring had called out of the blue her to ask about the show. Knowing how valuable his time was, Rosanne tried to answer quickly when he asked her how the show was going. When she gave a brief answer to his inquiry, he probed, “I want you to really tell me how the show is going,” and then he asked specifically about each of the numbers. He took 15 to 20 minutes with her on the call, seemingly unhurried and extremely interested. 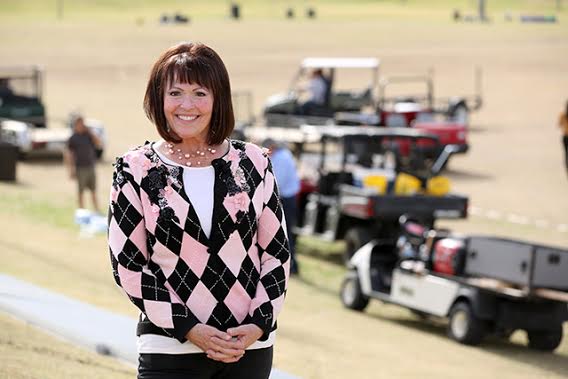 “I can’t take any credit for what is happening here,” Rosanne said. I know what is happening is what is supposed to happen. All the people creating the show looked at what I had envisioned and said, We want your dreams to come true.’ Mostly they wanted the youth to have an experience in celebrating the temple they would never forget.

They wanted “live true” to be in the fleshy tablets of their hearts, not just on t-shirts.

“Next to the day I married my husband and the days my children were born, the day of this performance is going to be the best day of my life,” she said.

She also wanted it to be one of the best days in the lives of every youth who had come to celebrate the temple and dance before the Lord. “They are missing Proms and MORP, tournaments and sports events where they were supposed to play to be here,” she said.

As we talked with her, the cultural celebration was the next day, the forecast was for rain-and none of us knew at that moment that the rains would not only come in buckets, but would turn the field to puddles and mud, drenching every youth. It would be the first rain this desert had seen since December. It would rain all over the parade she had been planning for ten years.

Yet, the faith that had driven her and her team to such heights of excellence was not going to fail her now. “I don’t know if it is going to rain or not,” she said from the vantage point of the day before. “The best miracle is going to happen tomorrow. We have a prophet of God right here, and if he wants this show to go on, it will go on. We all have lessons to learn and we’re willing to accept what the Lord sends.”

Let this be known

We are sons of Abraham

We will never compromise

We are not alone

And we don’t feel the fire.

They might have sang: And we don’t feel the rain.

In Australia, we can only read about such great events. You American LDS people are so blessed. But as Bytheway would say- I'm not bitter

My 2 sons were able to preform and I acted as a captain of 10 for the cultural celebration. One of the most amazing things I noticed was the spirit of Sister Tidwell. When she got up to speak to the youth you could feel the power her spirit has. The youth could feel it, they quickly hushed and listened to her carefully. We were in the back corner and very seldom could hear the speakers, but when she spoke we heard her, because the youth were listening. She did not speak loudly, or with force. She spoke to them gently and with the kindness of a mother. I am thankful for that experience.