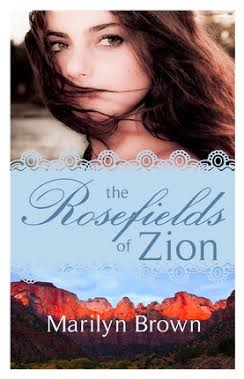 Marilyn Brown is known for writing literary fiction more than genre fiction though her newest novel straddles the line between the two. The Rosefields of Zion takes place in 1925 and is the story of a family, the Rosefields, who are the last holdout of farmers who don’t want to give up their land for Zion National Park. The story is told primarily from the viewpoint of Marissa Rosefield, the only daughter in the family, though brief portions are in other points of view.

The story begins with the death of the mother and moves quickly to the father’s mental deterioration following the loss of his wife and his subsequent death from a fall. The fall appears to be the result of the man climbing Watchman Mountain to hide a box containing the deed to the farm and other important family papers. Much of the remainder of the story deals with Marissa and her four brothers’ attempts to get a copy of the deed from the County Recorder’s office which seems to have been taken over by government employees determined to gain the land for the park rather than an elected local official. Actually the youngest brother, Joey, is the only one who looks for the box of records and Marissa is the only one who approaches the County Recorder. She not only approaches him and asks for a copy of the records, but naively returns week after week and allows the relationship to turn personal.

Marissa’s real love is her brother Michael. At a young age the two discover not only a strong physical attraction, but an emotional connection that goes beyond her relationship with her other brothers. Knowing anything beyond a sibling relationship would be wrong, they both carefully avoid any intimacy beyond the bond they share through music. Both attempt to find love with someone else.

Murder, deceit, and unrequited love are all part of the story, much as is found in genre fiction, but there is no happy ending. In genre fiction the story usually revolves around actions and a satisfactory resolution while in literary, the story is often more about the characters and their growth and development. Frequently the ending is sad or haunting. Marissa’s development is not as strong as I expected. She starts out naive and gullible with a reluctance to take charge of her life and never changes much. Some may say this is part of her strength of commitment, but it can also be seen as a symbol of her inability to truly move on. She drifts through life, letting life and others make her decisions, hoping rather than doing, and never really committing herself to anyone or anything other than Michael. She and Michael both display a level of integrity in their refusal to act on their strong attraction to each other. Even after they learn they have been victimized by lies they opt not to betray others to whom they have made promises.

The story is set in Southern Utah around Zion’s red rocks and St. George. The descriptions of the area are poetic and beautiful. The book is filled with side bar stories and flashbacks that are often out of chronological order. Every happening is so heavily foreshadowed there are no surprises, leaving the real story that of Marissa’s angst in dealing with the misfortune that befalls her family and her personally. Though the setting is a small Mormon community, there is little that sets the area apart from any other small western community other than Marissa doesn’t accept when offered a drink, the young people rehearse a dance for the gold and green ball floorshow, and the Relief Society prepares a luncheon following the funerals. The LDS references are cultural rather than doctrinal.

Marilyn McMeen Brown is a well known name in LDS literary circles. She has written more than a dozen novels, five histories, two stage musicals, and five books of poetry. She has also won numerous awards for her work. She and her husband have six children, eighteen grandchildren, and four great-grandchildren.