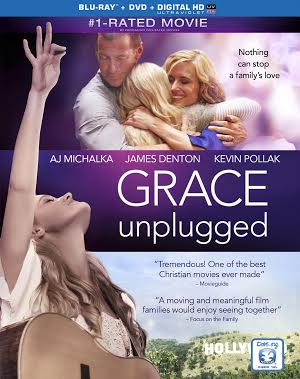 Note: Grace Unplugged is now available to purchase or rent through online streaming. It will be available on Bluray and DVD on Tuesday, February 11th (order it here). It is based on a novel of the same name.

18-year old Grace is the daughter of a former rock star who converted to Christ. While she adores her parents, her father’s controlling nature makes her feel held back, unable to pursue her dreams or fully develop her own talents. When the opportunity presents itself to make it big in the mainstream music industry she jumps at it, ignoring her father’s warnings about the dangers of that lifestyle.

What happens next you can probably guess. As a modern parable about the temptation of fame, the tension between parents and children, and the healing power of faith, Grace Unplugged takes enough cues from the biblical tale of the prodigal son that its plot is utterly predictable. While that sounds like a swipe, I don’t mean it that way. The story is timeless and influential for a reason. Its predictability, however, lays the burden on the filmmakers and actors to do it justice. They have to make an old tale new so the audience feels like they’re experiencing it for the first time. They succeed spectacularly.

Far too many faith-based films coast on good intentions but fail in the execution. Grace Unplugged casts excellent professional actors and gives them a thoughtful screenplay to work with. The dialogue comes off as realistic and genuine, making the emotional payoffs well-earned. The quality of the artistry helps drive home the film’s central message: we find peace and joy when we let our will be swallowed up by God’s. What’s more, the music is phenomenal (buy the soundtrack here). This is a must-watch for anyone, but will especially be appreciated by parents of teenage girls.

CONTENT OVERVIEW: Grace Unplugged is rated PG. There is no language, sex, or violence. After she strays from God, the protagonist drinks some and is pressured to spend the night with a TV star and dress immodestly, but she does neither. Drug abuse and promiscuity are mentioned in the context of those things being ungodly.

MESSAGES TO DISCUSS: Jesus Christ choose to do His Father’s will even though he was tempted to take another path; similarly, we should choose to let our will be swallowed up in God’s (Luke 22:41-42). While children need to honor their parents (Exodus 20:12) parents must give their children room to make their own choices and choose their own path. Music is one of the greatest ways to praise the Lord and feel His presence (D&C 25:12).