Why You Should Not Dismiss 'The Monuments Men' | Meridian Magazine

Why You Should Not Dismiss ‘The Monuments Men’ 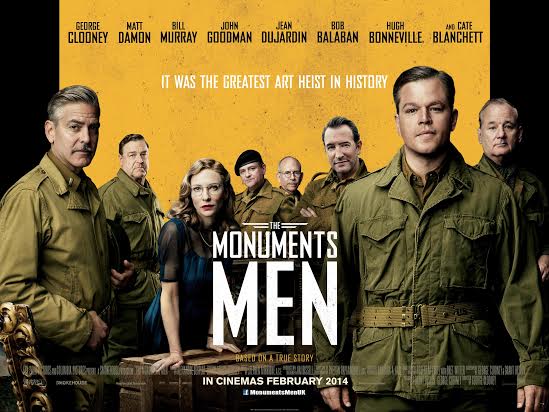 It is 1944 and the German army is being pushed out of their occupied territories and back across Western Europe toward Berlin. Through the destruction they will spitefully and inevitably leave in their wake, “Who [will] make sure that the statue of David is still standing and Mona Lisa still smiling?” That is the question answered by The Monuments Men, a new film from Sony Pictures and 20th Century Fox.

The film, inspired by a true story, tells of a rag-tag group of architects and museum curators that have been tasked to find and preserve buildings, bridges and art of historical significance before they too become casualties of war.

The real Monuments Men were a group of 345 men and women from thirteen nations who tracked, located and in the years following the war, returned more than five million pieces of artwork and cultural relics stolen by the Nazis. Their role in preserving the cultural treasures of Europe was unprecedented and theirs is truly a story worth telling.

This film, co-written and directed by George Clooney, tells that story through the eyes of half a dozen fictionalized members of this incredible real-life MFAA (Monuments, Fine Arts, and Archives) sector of the Allied armies. It features an all-star cast whose endearing performances of these anti-heroes asked to do something heroic are one of the things that ultimately carry the film.

Of particular note was the performance of Bill Murray who, though he brings his signature humor to the screen, also manages to bring real tenderness. In one of the most memorable scenes of the film, Murray turns off the shower to hear a recording from home of his family singing Have Yourself a Merry Little Christmas’ playing over the loud speaker in the camp and his shining and homesick tears are clearly distinguishable from the other water running down his face. Cate Blanchett, who plays a Frenchwoman spying on the Nazis in Paris, delivers effortless intensity that grounds the piece amidst so many comedians. And Hugh Bonneville (most known for his work on Downton Abbey) in his fearless effort to save the Bruges Madonna, delivers some of the most powerful screen time of the bunch.

It was a war film that made me laugh more often than it made me cry which was at times a jarring experience. But perhaps it was the lightheartedness that never stumbled into lightmindedness that facilitated an opportunity to think about a whole different facet of very difficult subject matter.

The film is unconventional in its approach to pacing and narrative structure. It does not clip along the way summer blockbusters have trained us to think a film absolutely must. With a goal as ethereal and elusive as saving history,’ and a fight being waged on so many fronts, it was at times difficult to know how to emotionally invest in a particular outcome. It was the likability of the characters and the compelling nature of the individual scenes, however, that kept my attention.

The piece itself actually played out very much like a visit to an art gallery. Many scenes stood alone in their impact and importance and though they may not have sped the story towards an obvious outcome, they seemed to each contribute an aesthetically necessary piece to the overall experience of the film.

You may be considering seeing this film for its intriguing plotline or for its all star cast that brings an energy that answers the question; “what would Ocean’s Eleven have been like if it had taken place in World War II?” You may be considering skipping it after reading mixed to negative reviews from the critics. Ultimately though, you will come away from The Monuments Men with a vividly painted question in your heart about what our heritage is as people, what we value and what we would be willing to give our lives to preserve. If for that alone, do not dismiss The Monuments Men.

The Monuments Men comes to theatres today, February 7, 2014.
It is rated PG-13 for some images of war violence and historical smoking.

A truly great movie telling a heart-breaking, but also wonderful story of what the Nazis actually did and those who risked their lives to save the great art of the world. How much all the world is so greatly enriched by, and indebted to, those who saved it from destruction. A wonderful movie to buy for our posterity.

Right on. What a great film with a great story and a great cast. I agree with Jean--the best moment in the film was Matt Damon walking away from an enticing Cate Blanchett--Hollywood got it right for once!