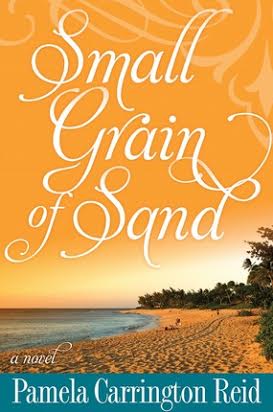 Small Grain of Sand by Pamela Carrington Reid takes us to the Southern Hemisphere where Jennifer Mason is a supervisor at a New Zealand early childhood center. She becomes particularly attached to a pair of four-year-old twins whose single father, Phillippe Durand, makes arrangements to pick them up a little late most days. He is a contractor and his current project is a boat he is building to help his extended family in Tahiti to become more efficient fishermen and enable them to compete with the big company fishermen. He has plans to sail the boat to Tahiti and while there build a new house for his grandmother. His ex-wife is demanding he sell the boat and split the proceeds with her or she will sue for custody of the children.

Phillippe plans to take his children on the voyage with him, giving them the opportunity to play on tropical beaches for the summer. He issues an invitation to Jennifer’s twin sister to accompany the children as their nanny, but an unfortunate accident leaves her unable to travel and Jennifer is persuaded to go in her place.

Phillippe is a man who doesn’t easily share his plans or feelings, yet carries within him the scars of a childhood tragedy and his failed marriage. Gradually the two become friends, but a gap remains between them because of her deep commitment to the Church and his determination to avoid it. They arrive in Tahiti to learn threats have been made against Phillippe’s family members warning them not to accept the boat. As they struggle to overcome the obstacles in their way, Jennifer and Phillippe must find answers to their questions concerning faith and the healing power of love.

Small Grains of Sand is a reference to oysters that get a small irritating grain of sand inside their shells and manage to improve those grains of sand until they turn into beautiful pearls. This theme shows the power of overcoming irritants and obstacles, thus forming better lives. The author follows the central theme very well.

The setting or background of this novel is used effectively and is a delightful escape for those in northern climates. The story moves a little too slowly for those who prefer high action novels, but is a relaxing read for those who like detail and a more leisurely pace. The major characters are likable and the plot follows a nice fiction arc. I found it refreshing to read a story set in a totally different part of the world than that of most LDS novels.

Pamela Carrington Reid is a native of Auckland, New Zealand. She and her husband are the parents of five children. She graduated from Auckland University and is popular teacher at BYU’s Education Week. This is her seventh novel. She has also written numerous articles for Church publications and scripts for LDS films.