LDS Fiction: The Baron and the Bluestocking presents Romance and Commentary | Meridian Magazine

LDS Fiction: The Baron and the Bluestocking presents Romance and Commentary 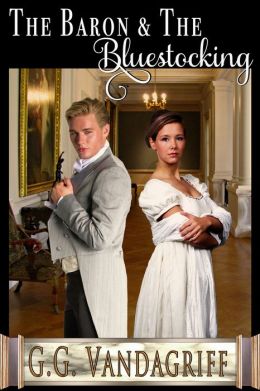 Christian Elliot, the fifth Baron of Shrewsbury, meets two very different young women while he still fancies himself in love with his best friend’s wife and supposes he’ll never find a wife so perfect as Sophie. While visiting the school for orphan girls which he helped to establish, he meets Helene Whitcombe, one of the teachers, who is a strong-willed, opinionated, but beautiful young woman who challenges him at every turn. Back in London, his mother introduces him to Lady Virginia Mowbray, a young lady who appears to be perfect for a rising member of parliament. She’s pleasant and comfortable, but boring.

The Baron and the Bluestocking by G.G. Vandagriff, a Regency Romance, explores the plight of single women in the early nineteenth century in England with the story of a young woman left penniless when her father dies. Her father, a vicar, left his wife and eight children with no means of support. Though leaving them no monetary support, they are well educated. The boys are able to find menial jobs, but the daughters are dependent on the oldest daughter, who eventually finds a post teaching in an experimental school for a small salary. Like the orphan girl she teaches, she and her sisters are without dowries or class distinction, and are unlikely to marry. Her situation leaves Helene firmly convinced women should be educated, have a voice in parliament, have the control of their own funds, and if they marry be equal partners with their husbands.

Even though Shrewsbury is liberal in his thinking for the time, he finds Helene’s views too extreme. He believes a comfortable wife, who knows her way around the ton would suit him best—but there’s something about Helene that keeps her on his mind and when Lady Virginia Mowbray presumes more to their relationship than friendship and her brother launches a full scale pursuit of Helene, he realizes the outspoken young woman means more to him than he’d thought and he suspects marriage isn’t the other man’s goal in his pursuit of the impoverished young woman. Just when he thinks he and Helene might work out their differences, she disappears.

To say more would spoil the story, so I’ll just say it’s a delightful romance, a bit of a mystery, and a social commentary rolled into one. The characters are likable, if a little clich, but that’s usually the case with the Regency genre. The background is recognizable as the usual country manor and posting inn along with the balls and extravagances of that era’s London social scene. More emphasis is placed on class distinctions than is usual and that gives the story more depth than is common for this genre. I was a little bothered by the abruptness of some of the scene changes and would have liked smoother transitions of time, place, and character points of view. However, I don’t think Regency fans will be disappointed with this one.

G.G. Vandagriff writes in several genres. Her genealogical mysteries first brought her to readers’ attention while her major historical novel, The Last Waltz garnered her a Whitney award. Most of her novels have an international flavor. She lived and studied in Austria, received her BA from Stanford and her Masters at George Washington University. She and her husband are the parents of three children.