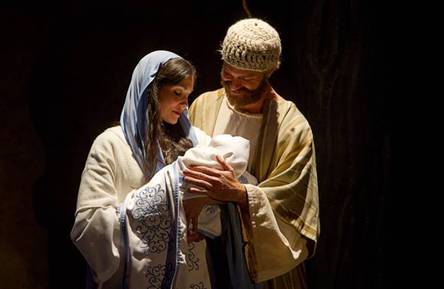 Katherine and Kam Brian perform as Joseph and Mary in “The Nativity” at Opportunity Village’s Ralph and Betty Englestad Campus. The production is a 20-minute long narrated piece involving more than 100 cast members from stakes in Las Vegas. 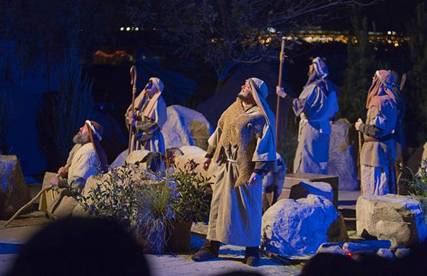 For five nights last week, the Las Vegas Nevada Redrock Stake transformed  the Opportunity Village Campus  into a mini Jerusalem to bring good tidings of great joy this holiday season to the Las Vegas area.  This annual live Nativity production has been a favorite Las Vegas tradition dating back some 25 years.

“It places your focus where it should be on Christmas, and that’s on the birth of our savior,” Kam Brian told the Las Vegas Review Journal. Kam has played the role of Joseph for the past five years. “That’s the whole reason Christmas exists. It brings you back to what really matters.”

The annual Nativity event hosted by the Redrock stake includes more than 100 cast members who act out 17 excerpts from Luke 2 in the King James Bible. About 300 to 400 people volunteer their time, expertise and supplies to put on the production, according to Jones. There are members who come each night to help with costumes, make up, music, food, ushering, singing, and care of the animals. 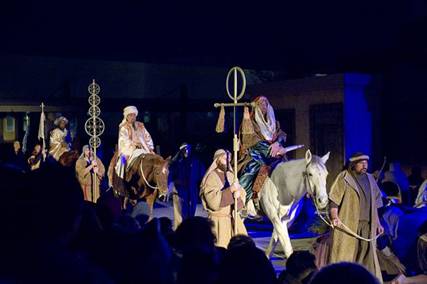 “All this is hosted as a free gift to the community,” Jones said. “No one’s looking to make money or get notoriety or anything like that.” “The cast members have no lines because it’s all narrated,” said Nathan Jones, “The Nativity” spokesman. “It’s a very simple retelling. The hope is that people will capture the basic feeling of the nativity.”

Every year, the production uses live goats, burros and sheep and casts a 1- or 2-month-old baby to play the baby Jesus. Brian said. “The kind of wonder and awe in the faces of the children is by far the best experience of the season for me.”

Approximately 10,000 and 12,000 people attended the Nativity last week in Las Vegas at the outdoor theatre. “It’s hard to estimate (the number of attendees) because we don’t give out tickets,” Jones said, “but we work really hard not to turn anyone away.”  “We’ve had kind of impromptu performances where everyone has agreed to do another showing,” Brian said. “We try not to turn away anyone who has made the effort to come out. “The group partnered with Opportunity Village four years ago to use its outdoor amphitheater, according to Jones. By changing locations from a Church to the community building, the production has become a vehicle to reach out and serve with other organizations in the community. 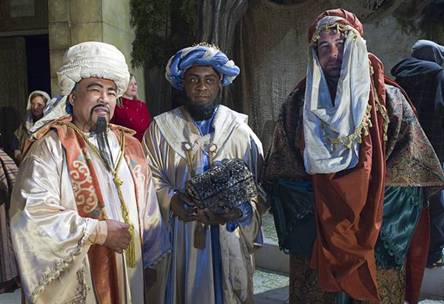 As visitors wait in line for the next show, cast members dressed in time period costumes discuss how the people of Jerusalem at the time of Christ dressed, ate, worked and worshipped.  Some discuss and show frankincense, myrrh, others show swaddling clothes, while others let the children pet live animals such as goats and sheep. Others carry live doves in cages and discuss the busy temple market at Passover season. Different singers and choirs also entertain the visitors waiting in line between performances.

“As a Christian group, we really strive to model our lives after Jesus. He said to lift the hands of those who hang down,” Jones said. “Opportunity Village is just a wonderful example of doing that, of helping a group that is really so deserving of assistance.” Although the production is based on the Bible, the group encourages people of all faiths and beliefs to attend. 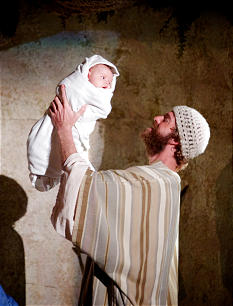 “The Nativity” takes about six months of preparation and two months of rehearsal. Brian, who has played Joseph for the past four years, typically starts growing out his hair and beard at the end of October. “We’re not historians, but we try to make something true to the original message and purpose of Christmas,” Jones said. “For the cast members to want to grow out their hair and beards, there’s a lot of preparation and forethought that goes into it.”  When people started making comments to Brother Brian about his growing beard, he takes it as an opportunity to invite them to the show. “Everybody seems to be to be touched in some way, ” says Brother Brian.

According to Jones, the intimacy of the set draws the audience into the production and makes them feel like they are bystanders of “The Nativity.” “It’s the highlight of the Christmas season,” Jones said. “The world switches off for just 20 minutes, and you’re transported to a very special place.” 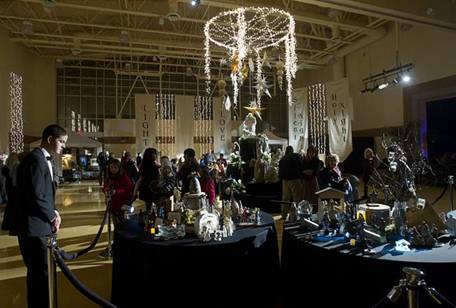 After each performance, the audience is invited indoors to view a large crche display of over 500 nativity displays from countries around the world.  A common reaction of visitors is that they said they had never “felt anything like this before.”  Brother Bo Warburton indicated that he had attended the production several years ago as a nonmember simply because he read about it in a local paper.  He attended and was touched by the Spirit, took the lessons, and now as a new member of the church was participating as an usher in this year’s production. 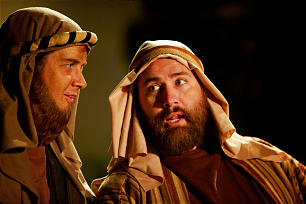 “The most important part of the event,” according to Elder William Stoddard, the Area Seventy in Las Vegas, “is that thousands of members and nonmembers were able to attend and feel the Spirit of the Christmas season.”

All Photos by Kevin Miller