A User-friendly Commentary on the Old Testament is Published

The Old Testament seems to be the most confusing and overwhelming book of scripture for most members of the Church. We search (often in vain) to find Christ in the verses and now there is finally a new resource available to facilitate that search. 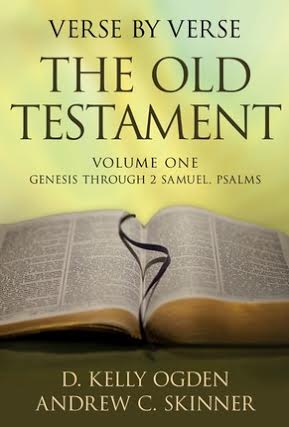 Continuing the series of verse-by-verse scripture commentaries (New Testament volumes published in 1998 and 2006, and Book of Mormon volumes in 2011), Verse by Verse: The Old Testament is now available. The two volumes are a comprehensive but very manageable and user-friendly commentary unlike anything ever before published for Latter-day Saints on the Old Testament. With decades of first-hand experience and teaching in the lands of the Old Testament, D. Kelly Ogden and Andrew C. Skinner tapped into the writings of Ellis T. Rasmussen, and together, the three of them have created a readable, illustrated resource for those who have long desired to attain some kind of mastery of our oldest scripture-the standard work that is least known, and for which there is less good material available for Latter-day Saints than any other scripture.

A few words about the scope and purpose of this commentary: The Old Testament is as long as all the other standard works combined. It is not possible or advisable, therefore, in a two-volume commentary to elaborate extensively on every verse, person, event, place, term, and doctrine contained in the thirty-nine books comprising the Old Testament.

Of necessity the authors have had to be selective in treating the subjects of this thousand-year span of sacred scripture. They have provided clear and concise explanation of every significant event and doctrine recorded by the ancient patriarchs, prophets, historians, and poets. They have clarified and resolved major textual problems and inconsistencies-passages that have not been transmitted to us correctly. This commentary is at the same time basically comprehensive and comprehensible.

Scholar and common reader alike will find much in these volumes to stimulate and satisfy their passion for intellectual and spiritual growth, learning, and understanding. The intent of this writing may be summarized in four adjectives: that it be accurate, informative, engaging, and inspiring.

There are many features in this commentary that are new and unique in Latter-day Saint literature and refreshingly presented in concise and intelligible format. For example, passages of scripture from the Pearl of Great Price, the Book of Mormon, and the Doctrine and Covenants that directly correlate with Old Testament passages are included in the text or even in the scriptural headings of the commentary. There are numerous photos, paintings, drawings, maps, and charts that illustrate significant scriptural content. Famous and important archaeological discoveries are discussed and illustrated.

Certain topics are specially treated as feature sections, such as the names of God, the concept of perfection, the ten plagues, the Passover, the significance of certain numbers in the scriptures, sacrificial offerings and feasts and festivals under the law of Moses, Baalism, musical features in the Psalms, the sons of the prophets, how to understand Isaiah, the authorship of Isaiah, the two prophets in Jerusalem in the last days, prophecies of the Messiah, and prophets’ descriptions of the great Millennium. In fact, one of the central and unique aspects of this commentary is its focus on seeing the coming of Jesus Christ in the verses of the Old Testament. The authors have created special, at-a-glance feature sections that describe the lives of Joseph, Moses, Joshua, Ruth, Job, Elijah, Elisha, Jeremiah, and Esther as types and foreshadowing of Jesus Christ.

The combined decades of teaching the Bible during the careers of Professors Ogden, Rasmussen, and Skinner-including many years teaching in the lands of the Bible-help to make these volumes unique in latter-day literature. They testify that they felt the hand of the Lord guiding them in preparing this commentary on our oldest scriptural witness of the Lord Jesus Christ.

One of the commentary’s reviewers, who read through the manuscript of Verse by Verse: The Old Testament, wrote: “It has been a joy reviewing your magnum opus, a seminal work in Latter-day Saint Old Testament studies. It will provide a legacy to multiple generations of members of the Church with their first access to faithful LDS Old Testament scholarship.”

The two living authors have had decades of preparatory experience for writing this commentary:

D. Kelly Ogden is a professor of Ancient Scripture at Brigham Young University. He has fulfilled the Lord’s injunction to Father Abraham: “Arise, walk through the land in the length of it and in the breadth of it” (Genesis 13:17). He has walked the full length and breadth of the Holy Land, along with following in the footsteps of Moses by climbing Mount Sinai eighteen times. His doctoral work focused on the Hebrew language and historical geography of Bible lands. He has written numerous books and articles on the Bible, especially during his fourteen-year residence in the Near East, and he helped prepare the Latter-day Saint editions of the scriptures. He has served as branch president in Jerusalem, associate director of BYU’s Jerusalem Center, mission president in Chile, Missionary Training Center president in Guatemala, and now as a sealer in the Provo Utah Temple.

Andrew C. Skinner is a former dean of Religious Education at Brigham Young University, former executive director of the Neal A. Maxwell Institute for Religious Scholarship at BYU, and current holder of the Richard L. Evans Professor of Religious Understanding. He has spent most of his academic career associated with the Old Testament world. He is a professor of Ancient Scripture and Near Eastern Studies, a member of the international editorial group that completed translating the Dead Sea Scrolls, and the author or co-author of over 200 articles and books on religious and historical topics. In addition, he pursued graduate studies at Hebrew University in Jerusalem, has taught at BYU’s Jerusalem Center for Near Eastern Studies on four different occasions, and most recently served as its Associate Director for Academics. Brother Skinner has served in various callings in the LDS Church, including bishop, district presidency (in Israel), a member of the Church’s Correlation Evaluation Committee, and a member of the Sunday School General Board.

Another contributing author, Ellis T. Rasmussen, died in 2011 at age 95. Dr. Rasmussen was one of the Church’s great Old Testament scholars. He taught Old Testament and other scripture at Brigham Young University for thirty years, serving also as chair of the department of Ancient Scripture and dean of Religious Instruction.

He wrote numerous books and articles, guided study tours to the Holy Land and other lands of the Near East, served with his wife as special representatives of the Church and Brigham Young University in the Holy Land, and, probably his greatest contribution to the Church, for most of a decade he supervised under the direction of Apostles Thomas S. Monson, Boyd K. Packer, and Bruce R. McConkie the preparation of the LDS editions of the Bible and the other three standard works.

Following are some basic reasons why Verse by Verse: The Old Testament is timely and needed:

First, the Old Testament is the human family’s first testament of Jesus Christ. The Savior himself commanded the Jewish people to study the Old Testament in order to gain a witness that He was their Messiah-Redeemer. In Jesus’ day, the scriptures comprised the canonical books of the Old Testament or Hebrew Bible, which included the Law, the Prophets, and the Writings. The Jewish sages of Jesus’ day believed that the act of studying the Torah alone brought eternal life. But Jesus pointedly taught that mere study of the scriptures, which in his day was the Old Testament, did not bring salvation. Sacred writ was given to testify of Him, and He, God, was the vehicle of salvation. It never was, and never would be the case, that written words on a page atoned for sins: only the blood of the holy Messiah does that. The Old Testament brings earnest truth-seekers to Jesus Christ and his doctrine.

A second reason for studying the Old Testament is that Jesus quoted from it extensively, and if we want to understand Jesus, really understand Him and what He taught, we must know what He studied.

A third reason follows from the first two. The Old Testament contains a description of the doctrines, ordinances, principles, and history of the plan of salvation. The gospel of Jesus Christ is manifest in considerable detail throughout the Old Testament.

A fourth reason: the Old Testament testifies of Jehovah, the premortal Jesus Christ, and His unmatched power.

A sixth reason to immerse oneself in the study of the Old Testament is to understand and appreciate the influence it has had on our language and culture. For example, many recognizable idioms in the English language derive directly from the Old Testament, particularly the King James Version. Many human names, place names, titles of other written works, and musical and artistic masterpieces all originate in Old Testament writings.

A seventh reason for studying the Old Testament is that we have been commanded to do so. In February 1831 the Lord declared that the “elders, priests and teachers of this church shall teach the principles of my gospel, which are in the Bible and the Book of Mormon, in the which is the fullness of the gospel” (D&C 42:12). The Old Testament is a major part of that injunction.

Years ago, President Marion G. Romney wrote: “People who walk in darkness may not be able to discern the fundamental meaning and the basic principles contained in the Old Testament. But as Latter-day Saints, we have no excuse. Therefore, it is very important that we do not hide the true teachings in the Old Testament from our children or from those we are called to teach by getting lost in things of lesser importance. . . . The Old Testament provides many examples of the importance of heeding and following the Lord’s warnings concerning impending distress or disaster. . . . We today have been given the responsibility to warn the inhabitants of the earth. We must remember this solemn responsibility and ponder it in our minds and hearts” (Liahona, Dec. 1985).

Life is not long enough for us to personally learn all we need to know. There is economy in learning from others who came before us. Some of our greatest life-insights come to us from the experiences, joys, trials, pains, and heartaches of personalities introduced to us in the Old Testament. It is one of the world’s best sources for stories that teach us great principles to live by.

Elder Richard G. Scott of the Quorum of the Twelve has given us an inkling of the power that could come to each of us if we make the study of the Old Testament a serious undertaking in our lives. He said: “Scriptures are like packets of light that illuminate our minds and give place to guidance and inspiration from on high. . . . Do you use all of the standard works, including the Old Testament? I have found precious truths in the pages of the Old Testament that are key ingredients to the platform of truth that guides my life and acts as a resource when I try to share a gospel message with others. For that reason, I love the Old Testament. I find precious jewels of truth spread throughout its pages” (Ensign, Nov. 2011, 6-7).

For all of the foregoing, and many other reasons as well, we know that a serious study of the Old Testament will bless our lives immeasurably.

This is available at Amazon. Kindle version is $22.

How do I purchse the commentary on the old Testament?December 23, 2013

I study the Sunday School lesson every week and could not understand the Old Testament by myself.