New Christmas Books to Enjoy for 2013

Every year new Christmas books appear to the delight of young and old. Some are full-length novels, some are booklets, some are collections of short stories, and some are beautiful picture books. This year is no exception. This year there are also a couple of old stories, given new life through new artwork and picture book formats. Stories are part of the Christmas tradition for most people and this year’s new books will make delightful gifts or enrich those days leading up to celebrating the birth of our Savior. 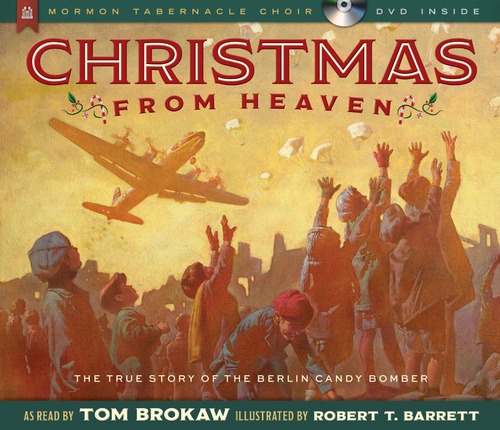 Though the story has been told many times and is especially dear to Utah readers who claim the “Candy Bomber,” Colonel Gail S. Halvorsen as their own native son, this new edition, Christmas From Heaven as read by Tom Brokaw and illustrated by Robert T. Barrett, brings tears to the eyes. Brokaw shared this story when he was the featured guest of the Mormon Tabernacle Choir’s annual Christmas program. It’s the story of a young American pilot “Hal” who was assigned to fly food supplies into Berlin, Germany, in 1948 after the Soviet Union blockaded the city, leaving the American and British sections of the city to starve. He was touched by the children who gathered at the airport to watch the planes and devised a program to drop candy via tiny parachutes to them. It tells how his small gesture grew from a few sticks of gum to twenty-one tons of candy airlifted to the children on Christmas Eve. —Shadow Mountain (Deseret Book) $21.99 includes a CD. 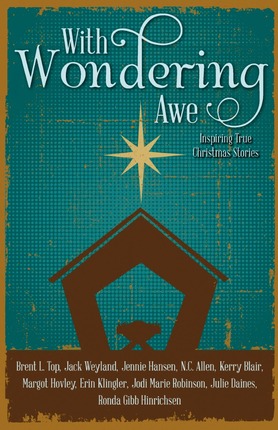 With Wondering Awe is a compilation of ten true stories written by ten well-known LDS authors, Brent L. and Wendy C. Top, Jack Weyland, Jennie Hansen, N.C. Allen, Kerry Blair, Margot Hovley, Erin Klingler, Jodie Marie Robinson, Julie Daines, and Ronda Gibb Hinrichsen. Yes, one of the stories is by me, Gold for Christmas, but it’s really my son-in-law’s story of his first Christmas after his release from Walter Reed Army Hospital following his injuries in Iraq. These are touching stories of trials, surprises, traditions, love, faith, and even humor. These are perfect stories to share for pre-Christmas family home evenings, short stories for short snatches of time during the busy holiday season, or for giving to home or visiting teaching families and neighbors. —Covenant Communications, $5.99 Also available on Kindle. 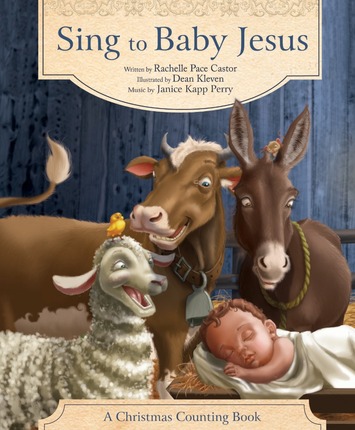 Sing to Baby Jesus is the work of three highly talented artists. Rachelle Pace Castor wrote the text which Janice Kapp Perry set to music and Dean Kleven illustrated. This hardcover book tells the story of the animals who sang for Jesus’ birth and is written as a counting book for small children. Sheet music for the song is included and children will love the animals drawn by the Disney illustrator who has done more than 200 Disney children’s books, including The Little Mermaid, Toy Story, Harry Potter, and the Lion King DVD cover. —Covenant Communications, $14.99. 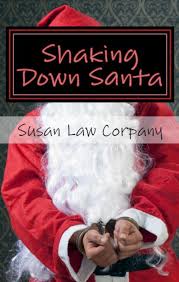 Shaking Down Santa is written by Susan Law Corpany and is a hilarious full length novel with a serious side. Lauren Baylor is the mother of two little boys and is mourning the loss of her soldier husband. A year has passed, but she feels nowhere near ready to date and isn’t too happy with the match making efforts of some of her friends. She’d really like to discourage one particular guy, but he just gets more persistent. When Santa, a complete stranger, shows up on her doorstep, her protective instincts go into action and she refuses to let him through the door, much to the disappointment of her young sons. Her persistent suitor, not to be outdone, dons a Santa suit too, and she soon has dueling Santa’s vying for her attention and confusing her boys. This book is part mystery, part light romance, and a whole lot of laugh-out-loud funny. —Hagoth Publishing Company, paperback $8.96, Kindle $2.99. 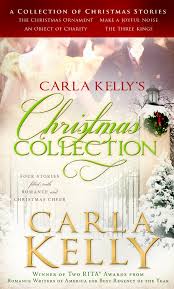 Carla Kelly’s Christmas Collection includes four short Regency novellas that take place during the approximate same time period, but are each different and unusual. Each tells of a young couple meeting and falling in love, but the stories go beyond romance to stories of courage, self-worth, compassion, and loyalty. Kelly’s unique ability to bring characters to life makes each of these stories a poignant Christmas tale and will add to the Christmas spirit for readers. Whether given as a gift or saved for your own enjoyment during those quiet escape moments during the bustle of the holiday season, this book is sure to please. —Sweetwater Books (Cedar Fort) $8.99 Also available on Kindle. 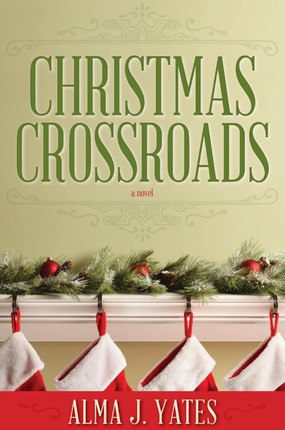 Alma J. Yates uses a familiar theme of people stranded by a snowstorm on Christmas Eve in Christmas Crossroads to create a compelling story of faith, generosity, and new beginnings. JP Morrison left home almost two years ago in a fit of anger, but recently his fast lane life has paled and he wishes he could go home, be with his family, and make right his differences with his dad. He makes plans to spend Christmas with a friend, but a blizzard and a serious car accident further down the icy road he is traveling leaves him stranded in one of those little “wide spot in the road” towns in the Colorado Rockies on Christmas Eve. He finds himself drawn to a young woman who is also stranded and as the evening draws on they become better acquainted and involve themselves in kind acts for their fellow snowbound travelers. Something about her reminds JP of the person he once was and gives him a desire to turn his life around. Their experiences make him wonder if he might possibly reconcile with his family and return to the dreams he once held. 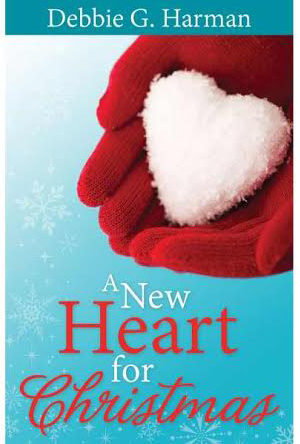 Get out your handkerchiefs for A New Heart for Christmas by Debbie G. Harman. There are two sons in the Bailey family. Bobby is seventeen, a gifted basketball player, and loved by everyone, including his fifteen-year-old brother Matthew, who has Down-syndrome and is dying from a weak heart. The family is praying for a new heart for Matthew, but shortly before Christmas tragedy strikes and the family is left to struggle for understanding and to examine their faith. This touching story comes in a small booklet and will make a great neighbor gift or stocking stuffer.—Covenant Communications, $3.99 Also available on Kindle. 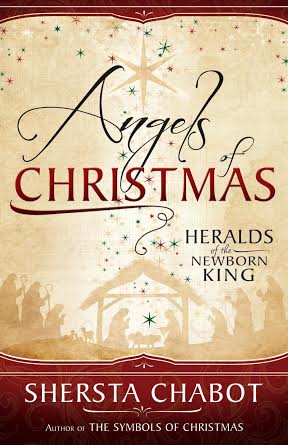 Angels of Christmas by Shersta Chabot is a short sixteen page booklet that tells the story of various prophets who foretold Christ’s birth. It is written entirely in verse. I’m no expert on poetry, but I found the rhymes a little forced and the flow choppy, but it is a good reminder of all those who shared the news of his coming far in advance of the actual event. 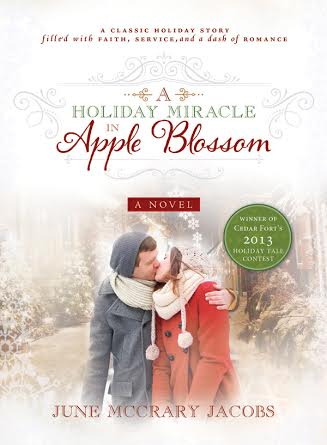 A tragic accident leaves a six-year-old girl, Mary Noel, unconscious and her beloved little dog dead. In time she regains consciousness, but is unable to interact or communicate with anyone. A Holiday Miracle in Apple Blossom by June McCray Jacobs tells of the child’s first grade teacher, Amber Kellen and a friend of the little girl’s father, Paul Watkins, who join forces to help the family pay the hospital bill and to rouse Mary Noel from her unresponsive state. In the process of organizing a winter carnival to achieve their goal, they discover a deep attraction for each other. This is a sweet Christian Romance, but readers should not expect any LDS references nor big surprises. —Cedar Fort, $10.39, also available on Kindle. 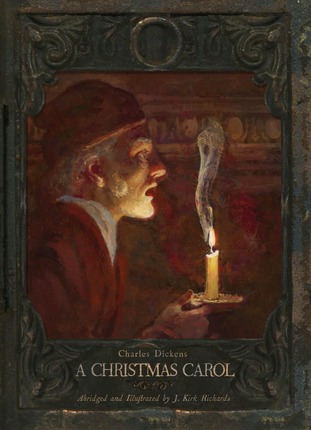 My least favorite Christmas story is Charles Dickens’s A Christmas Carol. Something about that tale has always annoyed me. Ironically, my husband loves it and makes a point to read it or watch a stage presentation of it each holiday season. This year there is a new edition of the story, a hardbound picture book abridged and Illustrated by J. Kirk Richards. I found the abridgement mercifully shorter than the original, but lacking the rich language. My husband read it too and feels too much was omitted. Richards’ artwork has been featured in galleries and art shows across the United States. He’s well known to LDS audiences for his work in documentaries, books, and various LDS magazines. I found his illustrations for A Christmas Carol dark and shadowy with a kind of gloomy vagueness that fits the story, but that may be my personal bias sneaking through.