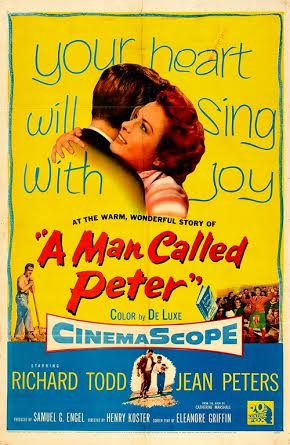 The life of popular minister Peter Marshall is dramatized in “A Man Called Peter,” which will be featured at a one-time screening at Brigham Young University’s Harold B. Lee Library auditorium on Friday, Dec. 6, at 7 p.m.

Doors open at 6 p.m. and admission is free, but seating is limited. Children ages 8 and over are welcome. No food or drink is permitted in the auditorium.

Directed by Henry Koster, this 1955 CinemaScope feature stars Richard Todd in the title role of Peter Marshall, the charismatic Scottish minister who, beginning in the late 1930s, electrified congregations at Washington, D.C’.s New York Avenue Presbyterian Church, the famed Church of the Presidents.

He was appointed United States Senate Chaplain in 1946 and served until he suffered a fatal heart attack in 1949, at the age of 46.

President David O. McKay of The Church of Jesus Christ of Latter-day Saints departed from precedent at the Church’s annual general conference in April 1955 to recommend that congregants see “A Man Called Peter.”

The film also features Jean Peters as Marshall’s wife, Catherine Marshall, who also penned the biography adapted by Twentieth Century Fox for the film. She was also a consultant on the motion picture.

Friday’s showing of “A Man Called Peter” is part of the ongoing BYU Motion Picture Archive Film Series, now in its 15th season, co-sponsored by the L. Tom Perry Special Collections, the Friends of the Harold B. Lee Library, and Dennis & Linda Gibson.