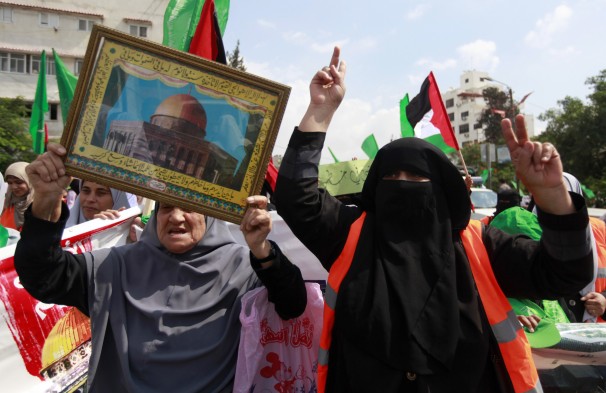 This week the Washington Post blog On Faith published an article detailing a burgeoning movement by Jewish activists demanding the right to pray on the site where their ancient temple once stood. The Jews currently pray at the Western Wall, the remaining piece of the original temple enclosure, but now some groups maintain that their people are realizing that “the Western Wall is not enough. They want to go to the real thing.”

“Their proposals, long dismissed as extremist, are now being debated in the Israeli parliament and embraced by an expansionist wing in the ruling coalition government of Prime Minister Benjamin Netanyahu.

These political leaders, many in Netanyahu’s party, want Israel to assert more, not less, control over the West Bank, East Jerusalem and the Old City, including the place known to Jews as the Temple Mount and to Muslims as Haram al-Sharif, or the Noble Sanctuary.”

This potential assertion of authority has obviously raised alarm with the Muslim world. What the Jews refer to as the Temple Mount is cherished by the Muslims as the place from which Muhammad ascended to heaven during his Night Journey. It is currently the site of the al-Aqsa Mosque which commemorates this holy history and Muslims claim that the mosque would be desecrated by an newly asserted Jewish presence there.

“‘This place belongs to the Muslim people, and no others have the right to pray here,’ said Sheik Azzam al-Khatib, director of the Waqf, the Islamic trust that administers the site. Khatib said the mosque is a unifying symbol for the world’s 1.2 billion Muslims.

If they try to take over the mosque, this will be the end of time,’ Khatib warned. This will create rage and anger not only in the West Bank but all over the Islamic world – and only God knows what will happen.'”

To read the original article in the Washington Post or find out more on this topic, click here.