Q96–Mother, Daughter: “I Can Feel Again”

Meridian offers Q96, a micronutrient for depression, stress and healthier brain function, because we have heard so many firsthand stories about how it works and changes life for the better. $25 million worth of independent research studies have shown similar results. 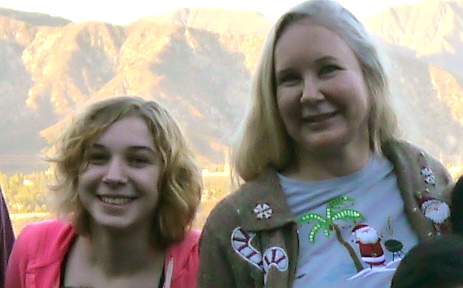 It is a terrible feeling to be lost from yourself. Deb Milam’s youngest daughter was so happy as a baby, but then gradually that changed until she became unrecognizable as her formerly pleasant self. She just started to get sick. She had learning disabilities and couldn’t focus and “it all went downhill from there.” She’d scribble instead of draw, act out in frustration and anxiety.

Deb hoped that her daughter would just outgrow the problem, but instead year by year her bipolar tendencies got worse. When she became a teenager, they hoped that it was just being a teenager, but the problems were too big to write off. Unsafe behavior. The inability to finish anything, no matter how hard she tried. Dramatic mood shifts so she was swinging up and down. She was angry and bratty, entitled and unhappy. She’d act out and then have a memory lapse. Something would happen and she would change the story in her mind.

Psychologists said she had a sequencing problem, meaning there’s a sequence of events and you put things in that don’t really belong there. To others it just appeared she was a liar. By the time she was in high school, she was desperately sick. She saw several hospitalizations, times when she ran away and couldn’t remember who she was.

With the trauma of a very sick daughter, Deb was affected, too. For years, as she watched her daughter suffer, her own depression set in. It was a post-partum depression, she said, that never went away. “When you are down so long,” she said, and you never come up, you just get numb. I didn’t have any emotions. Life was just survival for me.”

She lost the self-confidence to do many things. She didn’t look forward to anything. She could go to some place that should have been as fun as a nice trip and she just couldn’lt enjoy it.

Deb started exercising to help herself, but with her daughter so sick and acting out in unsafe ways, she was too nervous to stay away from the phone. “I felt I had to keep an eye on her,” Deb said.

“I just figured the rest of my life would be like that. It was just this way, and that was it.”

Then someone introduced her to Q96 the micronutrient formula that is designed as a natural remedy for healthy brain function. Deb wanted to give it to her daughter, but decided the best thing to do was try it first herself. “I wasn’t going to give it to my daughter if it didn’t work, and within five days, I knew it worked. I have taken it every day since then.”

She said, “I started to feel emotions again. I had felt numb for so many years, I could scarcely believe it. I started to feel better. I was more peaceful, more competent and more focused as I continued to take Q96.

“Over time, I began to do things that I hadn’t been able to do like cooking and cleaning. I am getting my life back,” she said, “and I never thought that would happen. Now I can do things that I thought I’d left behind forever.”

When Deb felt assured about Q96, she gave it to her daughter, who was so much worse off than herself. She began to notice a difference in her within a couple of weeks. “As long as she takes Q96 she is very articulate, very functional, very polite and a joy to be around. We can see that it works.”

But Deb said, a therapist her daughter sees was wary of Q96, and she stopped taking it. Her healthy situation began to reverse itself again. Deb said, when she takes the Q96, “We can see that she is better. When shee doesn’t, we can see her situation deteriorate. Not taking it is not good for her.”

Everyone who reads this needs to know about this alternative (non MLM) micronutrient therapy, proven alternative to medications for mood. https://bit.ly/1Mr3BgM