LDS Fiction: ROCKY ROAD, Next Culinary Mystery in the Series 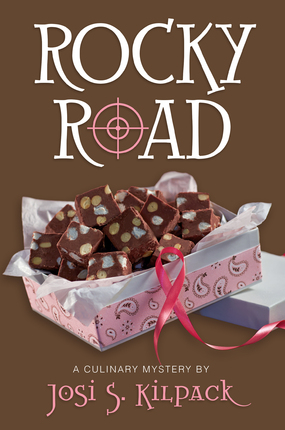 Sadie Hoffmiller has been a busy lady. Over the past few years she has jumped from one mystery to the next with hardly room to breathe between adventures. Her life has been in jeopardy numerous times, she’s taken some hard emotional hits, and she has fallen in love and become engaged. Now while her fianc, Pete Cunningham, is off with some of his friends fishing in a remote area, Sadie is set to enjoy a girls’ weekend in St. George, shopping, eating at wonderful restaurants, getting a pedicure, and doing a charity walk. The only problem is her friend Caro and Caro’s cousin, Tess, have something else planned. Rocky Road by Josi S. Kilpack opens with a disagreement between the friends over getting involved in a missing person mystery..

Sadie is tired; she doesn’t want to jump into another mystery, especially one in which she feels no personal attachment. Dr. Hendricks is a highly respected cancer specialist who not only has saved many lives, and is a sponsor of a cancer research foundation, but he’s been missing for two months in Southern Utah’s red rocks backcountry and she’s perfectly content to let the police handle the case. Caro and Tess have found a clue that suggests all is not as reported in the newspaper and want Sadie’s help to find the missing doctor. She insists that Caro take the information to the police, but Tess is upset when she learns Caro has done so and that Sadie isn’t interested in the three women solving the mystery themselves.

Sadie begins to change her mind about the case after she meets Dr. Hendricks’ ex-wife, Lori, and listens to a memorial speech given by his second wife, Anita. She can’t resist finding answers to the questions and inconsistencies that seem to pop into her mind in spite of her resolution to stay out of the case. Then something happens that has never happened to Sadie before—the police request her help. Now with the police giving her a green light to pursue the case, she’s off and running. In her search she finds Caro to be thoughtful and helpful, but Tess doesn’t know when to keep her mouth shut. With the other two women being cousins and friends, Sadie feels caught in the middle. Clues lead Sadie, not to the rugged red rock trails, but to Pine Valley and a great deal of danger.

This is the tenth book in the Sadie Hoffmiller culinary series and I found Sadie the most likable in this one. She’s grown a great deal from the annoying busybody snoop of the first few books. I also like that a woman in her fifties is no longer referred to as elderly or a senior citizen. She’s grown past the fearful insecurities that followed some of her middle book misadventures and now appears as a stronger, more sensible, and mature woman who is still curious, but pursues clues in an intelligent and rational manner. Character development of the other characters, though not as in depth as that of Sadie, is well done and allows the reader to see them as realistic people.

The flow of action is handled well and the plot is moved forward in an easy, smooth arc with plenty of surprises. There’s quite a bit of technical financial material and legal criteria central to the plot and I applaud the author for explaining these factors without lecturing or overwhelming the reader. Whenever I read a book that transitions this smoothly and builds clarification of technical material seamlessly into the story so well, I suspect the author had the assistance of a good editor. But even a good editor can’t work miracles with a sloppy manuscript and in this case it appears a good manuscript met a good editor.

As with all of the books in this series, there are recipes included. I’m aware several mystery writers do this, though I don’t get the point. Murder and mayhem simply don’t incline me toward cooking. A librarian recently told me of a culinary mystery series that was found at her library not long ago, cataloged and shelved with the cookbooks. Rocky Road describes well the journey Sadie takes to resolve this mystery, but the chocolate fudge by that name has only the faintest contrived connection to the story.

Josi Kilpack is an award-winning author who lives in Willard, Utah, with her husband and children. Rocky Road is her nineteenth novel. She is actively involved in LDStorymakers and generous with her time in support of other authors.

I've really enjoyed this series. The recipes are included because Sadie loves to cook and these are things she makes during the story.