PROVO, Utah – BYU Broadcasting won several Emmys recently at the 2013 Rocky Mountain Emmys, including an Emmy for The Mormon Tabernacle Choir Presents the Joy of Song. 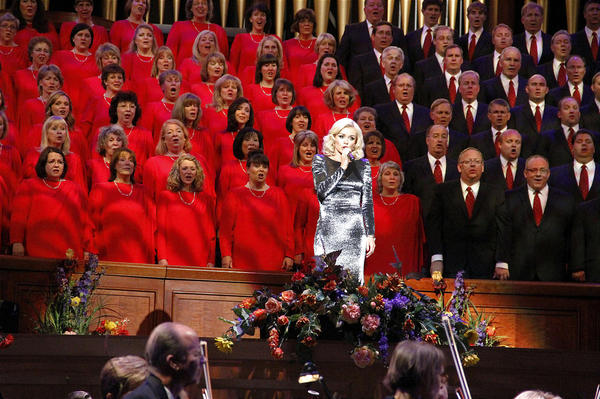 The Rocky Mountain Southwest Chapter of the National Academy of Television Arts and Sciences (NATAS) announced Emmy winners on Saturday, October 19, at the University of Phoenix Stadium, in partnership with the Arizona Cardinals. In the category “Special Event Coverage (other than news or sports)-Live or Edited,” BYU Broadcasting took home the award for its special, The Mormon Tabernacle Choir Presents the Joy of Song. Award recipients for this one-hour musical special, which featured the Choir and Welsh classical and crossover artist Katherine Jenkins, include producers Jim Bell and Edward Payne, Choir music director Mack Wilberg and general manager Scott Barrick, BYU Broadcasting executive producers Derek Marquis and Scott Swofford, and supervising producer Terri Pappas.

The Mormon Tabernacle Choir Presents the Joy of Song celebrates the centrality and universality of music in everyday life. Recorded in July 2012 in Salt Lake City, the one-hour special showcases the talents of the 360-member Mormon Tabernacle Choir and Katherine Jenkins, the 2012 runner-up on Dancing with the Stars. Jenkins performs a variety of songs, including “I Could Have Danced All Night,” “La Vie En Rose,” and a powerful rendition of the Welsh hymn, “Cymru Fach” (“Dearest Wales”). As a special highlight, Jenkins and her Dancing with the Stars partner Mark Ballas perform the paso doble to the music of “Espaa Cani” (“Spanish Gypsy Dance”). In addition, the program includes vignettes of recording artists, songwriters, and music lovers explaining the place music holds in their hearts.

BYU Broadcasting is home to Brigham Young University’s educational broadcast channels. This includes BYUtv, BYUtv International, KBYU Eleven, BYU Radio, and Classical 89 KBYU-FM. Additionally, households worldwide are able to access much of BYU Broadcasting’s programming via cable, satellite, and the Internet. BYU Broadcasting’s goal is to feature engaging, educational, and uplifting content that encourages viewers to “see the good in the world.”