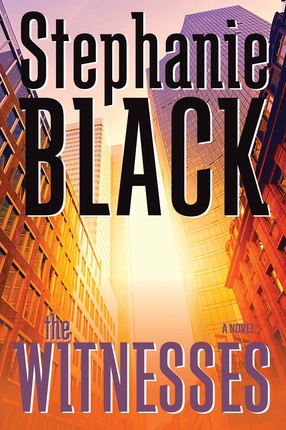 Nine years ago a new author appeared on the LDS book scene with a dystopian novel concerning a nation formed by a break- off group centered in what was the Northeastern portion of the United States. This nation called New America is a rigidly controlled police state where even the possession of religious material is a capital offense and life is controlled and monitored by a supreme ruler and council. A small group of people, who through personal experiences have become believers in God, face execution if caught before they can escape the country. This author, Stephanie Black, has gone on to become a many times award winning author in the mystery/suspense genre and a favorite of thousands of readers. At last she has followed up that first novel, The Believers, with a more tightly written and suspenseful sequel, The Witnesses.

After government agent and doctor, Daniel Lansbury, fakes the executions of three believers on national television, plans go awry. The three, Alisa Kent, Ian Roshek, and Jill Roshek were supposed to make it over the border into the US, but restrictions were tightened so severely they’re stuck in hiding. Lansbury’s father is a powerful, greedy man determined to eliminate the present ruler and take over control of the country. Two ambitious police officers looking to make names for themselves and increase their own power and authority set up several clandestine spy traps. The rebels are forced to move from one hiding place to another to avoid detection. Danger, doubts, and suspicion challenge their belief in God and each other as they struggle to avoid detection and to find a way to freedom.

A tool used to exert control over the people is a powerful drug that once it is injected in a person drains every thought, plan, and experience the subject has experienced, making hiding plans or unpopular attitudes impossible. It can also be used to plant imaginary experiences that feel horrifyingly real. After the injection of the drug, the subject goes through terrible withdrawal and flashbacks. Alisa suffers through these flashbacks and the uncertainty they cause and Ian, who cares a great deal for her, is frustrated by his inability to help her. Daniel and Ian’s sister, Jill, were once in love, but are no longer sure about each other.

Black makes her characters come alive for the reader and the growth each of the major character makes enhances the story. The supreme ruler is an old woman, ninety-four years old, and it is hard to say whether her changes are caused by greater understanding and maturing or whether she’s trying to cover all of her bases as she senses her own end of life and finds it comforting to accept the possibility that life continues beyond death.

The author is a master at creating suspense and the technique she uses so well in her suspense novels is evident in this pair of dystopian novels. She also knows how to end this type of story by resolving the issues of the particular volume, but leaving open the possibility of new issues that might be the basis of a future volume.

The story’s weakest point may be in the area of technology. For a story that takes place approximately a hundred years in the future, there’s a noticeable lack of advanced technology. Transportation and communication are pretty much the same as that of the present time.

Dystopia (misery, oppression) is the opposite of utopia (happy, ideal). Dystopian novels are often found in young adult literature, but this one has a more adult theme with its excessively controlled socialism brought about by political extremism. The misery, distrust, and emptiness of a people who reject God and self determination is brought about by their own apathy and forfeiture of rights more than through the militaristic or psychological force often found in YA dystopian novels. Still the force is there, underlying all; conform or die.

Black’s fans will certainly pick up this book and I recommend it for all those who enjoy a well-told story, those who like a little science fiction, and those who revel in subtle moral or religious messages.

Stephanie Black was born in Utah and has lived in Arizona, Massachusetts, New York, and Limerick, Ireland. She, with her husband and children, currently live in Northern California. She is a four-time Whitney Award winner for Best Mystery/Suspense.

THE WITNESSES by Stephanie Black, published by Covenant Communications, soft cover, 280 pages, $16.99. Also available on CD and for e-readers.