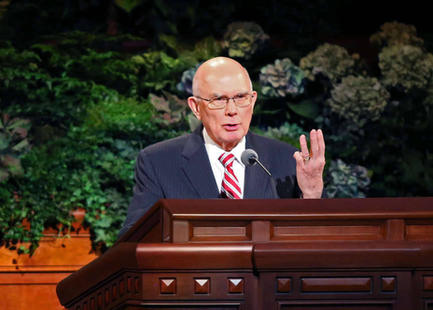 In General Conference, Elder Dallin H. Oaks emphasized the importance of bearing children within marriage. He also warned against the worldwide drop in childbearing statistics that has left most developed countries and many developing countries with the threat of “underpopulation” or a birth rate so low as to fail to maintain the existing population.

“Knowledge of God’s plan for His children give members a unique perspective on marriage and family. The Church is known as a family-centered church. Marriage of a man and a woman is necessary for the accomplishment of God’s plan. The ultimate treasures on earth and heaven are one’s children and posterity.”

“We look on marriage and the bearing of children, and the nurturing of children as part of God’s plan, and a sacred duty of those given the opportunity to do so. … Because of what we understand about the potentially eternal role of the family, we grieve at the sharply declining numbers of births and marriages in many western countries whose historic cultures are Christian and Jewish.”

“Responsible sources report the following: The United States now has the lowest birthrate in its history. And in many European Union nations, and other developed countries, birthrates are below the level necessary to maintain their population. This threatens the survival of cultures and even of nations.”

“Now let us move to another serious question: Will you choose to follow the Lord or the philosophies of men?”

“For example, arguments swirl around that the earth is dangerously overpopulated and that couples should restrict the number of their children. Have you heard that one?”

“However, at the Fifth World Congress of Families in 2009, Sister Nelson and I heard a scholar present a paper in which he made a stunning statement. He said if each man, woman and child now living upon the earth were allotted a quarter of an acre of land, all 6.8 billion people would fit in the country of Brazil with 20% of Brazil still left unoccupied. Does that sound like the earth is overcrowded? I checked that calculation. It is correct. I adjure you to believe the Lord, who said that the earth is full, there is enough and to spare.'” (D&C 104:17)

(Russell M. Nelson, “Youth of the Noble Birthright: What will You Choose?” CES Devotional, September 8, 2013.

Elder L. Tom Perry, in April 2005 General Conference, recounted this interesting exchange with an official of a European country:

Elder Perry asked, “‘What will happen in your country with the changes that are occurring? The declining population and the influx of an increasing number of immigrants will eventually make you a minority in your own land.’ With great national pride, he replied, This will never happen.’

“I countered, How can you support such a position with immigration exceeding your country’s birthrate?’ He kept insisting this would never happen in his country-why, they would close the borders of our land before they would allow it to occur.’

“I pressed on, How can you prevent it with your current trends?’ His next statement shocked me: I’m 82 years old. I will be long gone before we have to face that problem.'”

For a more detailed discussion on the myth of overpopulation and the coming underpopulation implosion, see my earlier article in Meridian Magazine entitled

“Dan Brown’s Inferno and the Dangerous Myth of Overpopulation” This bestselling book by Dan Brown is now being made into a major motion picture starring Tom Hanks and directed by Ron Howard. It is to be released in December, 2015.

Islam want a Caliphate- which means a world under Sharia law. They have the birthrates to make that happen with out firing a shot, or a sucide bomb. Under Sharia, the world will be FORCED to be Muslim, pay huge fines and be treated as a second class citizen (called a Dhimmi)-or be killed. It's in EVERYONE'S interest that this NOT happen, and children raised by a married Mom and a Dad is the answer. It's that simple