Being Smarter than a Pig | Meridian Magazine

Being Smarter than a Pig 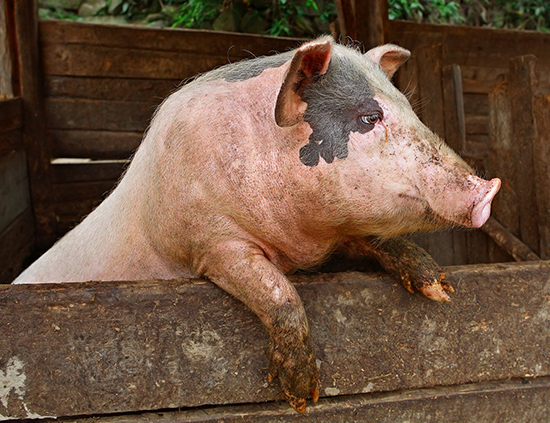 Early one spring, my father purchased a cute little wiener pig for us to raise. To me fell the assignment to feed it. When it was small, it was fun to haul the food scraps, garden weeds, and sour milk to it. The little pig would climb right into the trough with his food. He would root through it to eat the choicest bits first.

I would laugh at his antics as he would bite into something that was less desirable. He would shake his head and oink his displeasure. When he was full and happy, he would come to me and nuzzle me, begging for treats.

But as the summer progressed, and he grew at an average of five pounds per day, he was no longer cute. By the time he was over 400 pounds, he no longer begged for his treats, but knocked me down if I withheld them.

When fall came, and he was over 500 pounds, my father decided it was time that the pig moved on. We put the cattle rack on our old pickup, and my father backed it up to the pig’s pen so we could load him.

We set up the ramp into the pickup, and, when my father moved into position to help me load the pig, I said, “It’s okay, Dad, I can do it.”

He smiled, and left me to accomplish what I thought would be an easy job. I was, after all, twelve years old and an expert cow herder. How different could it be for a pig – especially just one?

I got behind the pig and started shooing him toward the ramp. He paid no attention to me, so I gave his rump a swat. He took off toward the ramp and then ran a circle around me.

I tried again. I got behind him and moved slowly toward him. He again moved toward the ramp, but as before, at the last minute he turned. He attempted to run around me, but I was ready this time. I jumped in his path, yelling and waving my arms. He plowed through me like wasn’t even there.

I picked myself up and brushed the hoof prints from my clothes. I was mad now. Again I moved him toward the ramp and once more he turned. But I didn’t plan to let him plow me over. I threw myself at him. But 100 pounds does not fare too well against 500. I was like a small compact car in the path of a freight train.

He hit me hard, and I felt the wind go out of me, but I held on. I had my arms wrapped around his neck and one leg over his back. He didn’t seem to like the idea of being ham-pered in his escape. He took off at full speed, running circles around his pen, squealing as he went.

I was afraid that if I fell off he would trample me, so I held on tight, and away we raced in a literal competition to bring home the bacon. After a few rounds, he widened his circle and took me under a low rafter that caught me hard in the head, knocking me to the ground.

As I slowly pulled myself together and stood up, I saw an old neighbor standing there, grinning. “Were you planning on loading that pig or entering him as a steed in a bacon derby?”

“Son,” he continued. “That pig outweighs you by five times. You can’t beat him by strength. Do you want to know how to load him?” I nodded, so he handed me a bucket. “Take this and put it over his head. He will try to back out of it. You just keep moving forward and back him into the truck.”

I stuck the bucket over the pig’s head, and, sure enough, he backed away. I stepped with him, and he kept backing. I moved right or left to steer him as needed. He loaded into the truck with barely a hitch, and I latched the door.

My old neighbor grinned. “You really need to be smarter than the pig.”