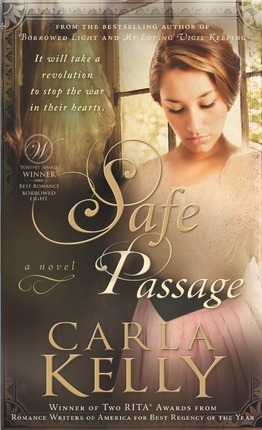 Carla Kelly delivers a powerful historical novel with Safe Passage, the story of a young man who braves Mexican guerillas and the armies of various Mexican factions to rescue his wife and get her to safety during the Mexican Revolution. The couple have been separated for two years following a hurtful argument, insulting words, and a great deal of misunderstanding. They both have regrets, but let pride stand in the way of a reconciliation until war breaks out in 1912 and the Mormons are ordered to leave Mexico. When Ammon learns his wife was left behind, he stands up to his father-in-law, drives a hard bargain, and returns to rescue Addie.

Ammon is furious when he learns Addie’s father left her behind to care for her ill grandmother. After some heart-stopping adventures he arrives in Garcia to find his wife’s grandmother is dead, a threatening army is searching the town, and Addie refuses to leave Mexico until she makes good on a promise to the doctor who saved her from a previous invasion.

As they travel deeper into war-torn Mexico to deliver a bag of money (ironically stolen from Ammon!) to the doctor’s wife they are dependent on faith, spiritual promptings, and the good will of people whom Ammon befriended in his previous dealings with the Mexican and Indian people they encounter. Addie, a notoriously bad shot, fires a lucky shot that kills a mountain lion about to attack Ammon and unknowingly starts a legend that serves them well.

The Mexican Revolution wasn’t like the American Revolution with two defined sides. Instead it was a clash of wood-be politicians, bandits, impoverished peasants, and the armies of anyone who could raise an army. Some of their fiercest soldiers were women. Gringos or Americans, including Mormons who had established many colonies in Mexico, were the frequent targets of the various factions searching for weapons, horses, and land. Mexicans fought Mexicans and no one was safe.

Kelly has a distinct style of writing that includes ironic little twists of humor in a story that is not humorous. Her descriptive prose gives a panoramic view without wasting words and the reader discovers little hidden gems in unexpected places. Her characters are well-developed and realistic. It’s easy to like, respect, and root for Ammon and Addie while forgiving their flaws. In the romance portion of the story, the author doesn’t ignore the strong physical attraction between the young pair; it’s definitely there, but the story is more one of love than lust. The historical elements of the story are well researched from the little day to day actions of the time period to the large revolution related events. The first couple of chapters grab the reader’s attention, then the action shifts to a higher, more dangerous level and stays there with only brief breathers.

Carla Kelly is the author of more than thirty novels and novellas for Donald I. Fine Co., Signet, and Harlequin. Her writing ranges from serious historical works to Regency Romances, to LDS targeted novels. She has been the recipient of numerous writing awards. Through her childhood as a military “brat” and her adult years living in many different places, she has gained an appreciation for her present home in Utah.