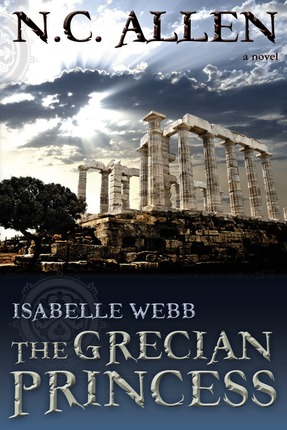 The third and final volume in the Isabelle Webb series by N.C. Allen is The Grecian Princess in which the author wraps up the many dangling threads left from Legend of the Jewel and the Pharaoh’s Daughter. Isabelle’s party has grown to seven, including her recently betrothed fianc, James. As they arrive in Athens they have one jewel with them, the second jewel was stolen from them by Mr. Sparks, an emissary of the mysterious Egyptian who is determined to obtain all three jewels and destroy their group, and the legend places the third jewel in Athens or nearby.

Isabelle and her friends set out to explore the city, concentrating on museums, antique shops, ancient ruins and any structure that resembles the maps found in Dr. Pearce’s papers sent to his son by the historian’s assistant following the old man’s death. They also befriend two Grecian women when rumors suggest the older one knows more details of the legend of the jewels. They also learn that in addition to the jewels there is a box or case that the jewels fit into where they must be placed as part of ending the curse.

There is plenty of intrigue and excitement as the group is separated and smaller groups and persons are pursued by not only the Egyptian’s men, but a second group known as the King’s Men. They also face danger from extreme weather and the eruption of a volcano. A number of romances take place, not only that of recently engaged Isabelle and James, but others too.

The background, as in the first two books, gives details of the country as it appeared a century and a half ago. The artifacts and ruins are woven into the story, lending to the mysterious nature of the three gems believed to have negative mystical properties or to lead their fortunate owner to a fabulous treasure trove. It is the group’s goal to unite the stones and destroy them before they can be used for greed and evil.

The various characters discover untapped strengths in themselves and each other. They also show growth as individuals and as a united group. Isabelle is the principal character, but with so many others playing a major role as well, the others also take the lead in various undertakings. Being the last book in the series and with the addition of three more people in their group in the course of this book, there are a lot of resolutions that take place and unless the reader has read the previous volumes he/she may become confused by the large cast.

The Isabelle Webb Series is a spinoff series from N. C. Allen’s popular Civil War series, Faith of Our Fathers which placed Allen squarely in the realm of highly sought after LDS authors. She has also published four other contemporary romantic novels. She and her family live in Ogden, Utah. When she isn’t writing, she loves to run and has completed several marathons.

I picked up Legend of the Jewel in DI not to long ago and was disappointed in the ending. Glad to hear it was not a stand-alone book but had sequels. Now I will have to read those to see how the story comes out.