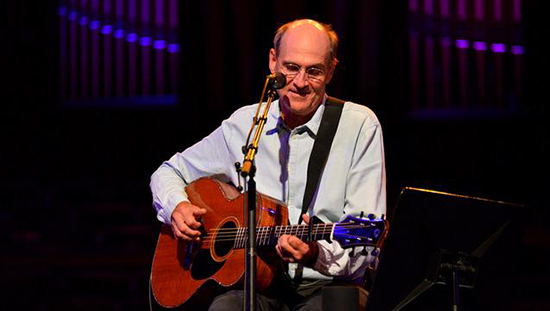 This weekend, the Mormon Tabernacle Choir and The Church of Jesus Christ of Latter-day Saints welcomed singer-songwriter James Taylor, the Utah Symphony and thousands of patrons to the Conference Center for the 30th Anniversary Tanner Gift of Music concert series, 6-7 September.

Taylor called the choir a “national treasure” and said though it took years to find the right time to perform on Temple Square, it was worth the wait.

“It just is extremely fulfilling to me to come to Salt Lake City and to meet these wonderful people and to be part of this community for a week or so,” he said. “It’s something that I’ve been really looking forward to, and it’s just a great pleasure, delight and honor.”

Choir music director Mack Wilberg returned the compliment regarding planning and rehearsing with Taylor, who he called an “icon of American popular song.”

“We’ve had a wonderful time,” Wilberg said. “It’s taken the choir a little bit out of our box, but in a really wonderful way.”

Taylor noted that some of his songs, including “My Traveling Star” and “That Lonesome Road,” just “really want to be performed by a choir.”

“[In rehearsal], after we did a song of mine, an a cappella song called That Lonesome Road,’ I turned to Mack and said, You know, this song has died and gone to heaven,'” Taylor said. “This is the iteration of it that was waiting to happen.”

The 30-year-old, free concert series was the brainchild of former Church President Gordon B. Hinckley (1910-2008) and Obert C. Tanner (1904-1993), founder of the O. C. Tanner Company. The two men were neighbors and friends, and they sought to inspire greater public appreciation for music. To do so, they brought together the state’s two most prominent musical organizations, the Utah Symphony and the Mormon Tabernacle Choir, to join in an annual community concert, with famed soloists, conductors and other choirs as guest artists.

The series has drawn many notable guest performers over the years, including The King’s Singers, Brian Stokes Mitchell, Denyce Graves and Ronan Tynan. Grammy Award-winning artist James Taylor was chosen for this anniversary concert because of his broad appeal across many generations and music styles.

“We have wanted to have him join us in concert for many years, and this 30th anniversary program just seemed like the perfect opportunity,” Wilberg said.

The impetus behind the concert series, its goal to serve the community, is something Taylor connects with deeply.

“In this [Church], they speak about callings. … It’s a big, constant part of their lives to be called to do service,” he said. “That’s how it works with me too. [I admire the] people that I come across in my life who are doing good work and things that make me feel better to be part of, … and I want to help in any way that I can.”

Taylor’s concert selections include his own songs as well as a few of his favorite composers’, including George Gershwin and Rodgers and Hammerstein. Wilberg said he thinks fans will “recognize almost every one of them. They’re all wonderful.”

Choir president Ron Jarrett said the choir members are thrilled to sing with Taylor. “We’re going to try to calm them down just a little bit so they’re not too much of a distraction,” Jarrett joked. “I told them last night that it would probably be okay if they got into the spirit of the music that they were singing with Mr. Taylor, and maybe nodded their heads or moved their shoulders a little bit. What a mistake. We had them practically dancing off of the rostrum.”

Tickets for the concerts have been distributed, but those wishing to attend are encouraged to stand by for last-minute seating each evening. The standby line will form at the north gate on Temple Square (approximately 60 West North Temple Street) at 6:00 p.m. for each evening’s 8:00 p.m. performance. As seats become available, patrons in this line may be allowed to fill empty seats in the Conference Center. Patrons may also view the concert on big screens in the Salt Lake Tabernacle by video relay or other overflow venues on Temple Square. Seating is available on a first-come basis.

About the Tanner Gift of Music Concert Series

The first concert in the series, Verdi’s Requiem, was performed in the Tabernacle in 1983 under the baton of guest conductor Stanislaw Skrowaczewksi. The 30th anniversary concert will be conducted by Mack Wilberg, music director of the Mormon Tabernacle Choir. The repertoire for the concert series varies between classical concerts and popular music.

The series is funded by an endowed trust created by O. C. Tanner and his wife, Grace.

About the Mormon Tabernacle Choir

The choir is based in Salt Lake City, Utah, composed of 360 volunteer singers ages 25-60 who are members of the Church. They practice and perform weekly and are accompanied frequently by the Orchestra at Temple Square.

The Mormon Tabernacle Choir originated in the mid-19th century. A small choir first sang for a conference of the Church on 22 August 1847, just 29 days after the first pioneers arrived to settle the Salt Lake Valley.

The choir’s key mission is to transcend cultural and generational boundaries to unite people around the world through music. Choir members sing because they love to share truth and the beauty of music with people everywhere.

I wish we could see this later on BYUTV or get the opportunity to purchase a DVD of it!