Horse Bones that Date 50 Years Prior to the Spanish 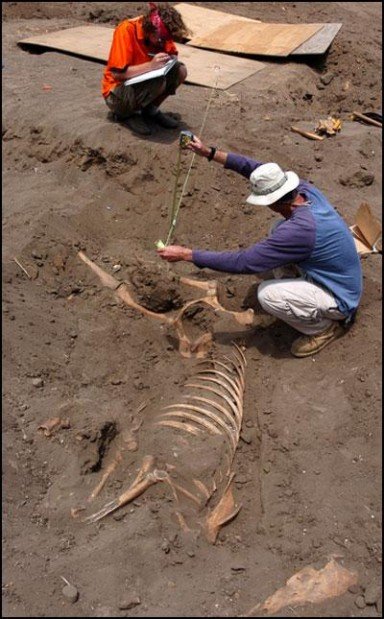 In July, archaeologists in Carlsbad, unearthed a nearly intact skeleton of a horse that apparently lived and died 50 years before the Spanish conquered California.

This followed a June discovery of another skeletal horse and burro.

U-T San Diego reported, “The finds are significant because native North American horses were thought to have been extinct more than 10,000 years ago, and the remains are older than the recorded conquests by the Spanish, who reintroduced horses to the New World…

“Radiocarbon dating of 340 years, plus or minus 40 years, puts the death of the horse sometime between 1625 and 1705, Mojado said. Therefore, the horses died at least 50 years before San Diego Mission de Alcala, the first of the California missions, was founded in 1769. The other horse and the burro were buried at the same level, suggesting that they were buried about the same time.

“The bones of the horses and the donkey showed no signs of having been shod, an indicator that the horses were not brought by the Spanish, who fitted their horses with iron shoes.”

The article explores some possible explanations:

“The radiocarbon date, if corroborated by more elaborate tests, may be remarkable since North American horses were thought to have been extinct by the late Pleistocene era more than 10,000 years ago, said Bradford Riney, a paleontology specialist with the San Diego Natural History Museum.

“‘That would make (the site) extremely important,'” he said Thursday. “‘It would be an early example of domestication.'”

“Alternately, Mojado postulated that the horses may have been Spanish in origin, perhaps from an ill-fated exploration that never returned and so was lost to history. Perhaps the lost Spanish explorers offered the horses and donkey to the American Indians as a gift,” Mojado said.

The question of horses in the America is always an intriguing one for Latter-day Saints, because the Book of Mormon specifically mentions horses-and yet archaeologists have said that horses were extinct in the Americas by that time.

The LDS are not concerned with horses because the word horse in the BOM actually means deer or tapir.

The Western Center Museum in Hemet, CA has horse fossils discovered during the excavation of the Diamond Valley reservoir. They date to long before the Spanish arrived.