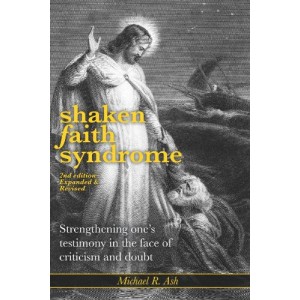 “There will be a convergence of discoveries (never enough, mind you, to remove the need for faith) to make plain and plausible what the modern prophets have been saying all along…[I] do not expect incontrovertible proof to come in this way…, but neither will the Church be outdone by hostile or pseudo-scholars.” (Neal A. Maxwell)

In 1997 a group of Latter-day Saints who frequented the Mormon message boards of America Online found that they were responding to the same LDS-critical arguments over and over. They decided to form a non-profit organization so they could share information and create a repository of responses. That organization was The Foundation for Apologetic Information and Research, or FAIR. In 1999 FAIR held their first conference in Ben Lomond California. A large percentage of the few who attended this first conference were the speakers themselves. Two weeks ago FAIR held their fifteenth annual conference in Provo, Utah, with about 400 attendees.

A lot of things have changed through the years in the FAIR organization. While the group was originally formed because of the combative nature of the message board atmosphere, FAIR eventually separated themselves from the contentious message board environment and focused on “educative apologetics.” As Gerald Bay once said, “You can never argue a person into faith; Christian theology and apologetics exist in order to make sense of the world for the believer, but they do not in themselves create that belief.”[i]

FAIR is focused on helping or educating members who struggle with challenging issues, or investigators who are searching for answers to anti-LDS accusations. While FAIR will always be an apologetics organization, the confusion over the word “apologetics” has prompted a more recent change in the FAIR title. It was announced at the 2013 FAIR Conference that FAIR will now be known as FairMormon with the tag line: Critical Questions, Faithful Answers.[ii] As Steven Densley (newly appointed Vice President of FairMormon) explains, “We have changed our name and are updating our websites in order to make them more easily accessible. The name has been simplified. Instead of The Foundation for Apologetic Information and Research, it is now simply FairMormon. Hopefully this will be easier to remember and will allow us to spend more time doing apologetics rather than spending our time explaining what apologetics is. Our mission has not changed, but hopefully, with the name change and the changes with the websites, our organization will be more effective.”[iii]

We’re not going to argue someone back into the Church, but we can help inoculate members against LDS-critical arguments through better education, and-for those whose testimonies are faltering-we can set the record straight on false anti-LDS claims or offer logical alternative views which fit within a framework of belief. I’ve attempted to do both in my book Shaken Faith Syndrome: Strengthening One’s Testimony in the Face of Criticism and Doubt.

It’s been 5 years since Shaken Faith Syndrome was first released. We ran out of copies at the end of last year-couldn’t even fill our Christmas order for Deseret Book. It was decided, since another printing was needed, that we would introduce a 2nd edition which would fix typos and mistakes as well as update and add material that had changed since 2008. The result is the 2nd edition of Shaken Faith Syndrome.

For those of you who already have Shaken Faith Syndrome 1, I want to quickly note some of the changes made in the 2nd edition (in addition to new front & back covers). First, I reshuffled several of the chapters and material from some of the chapters to create better flow and continuity. It has a vastly improved index making it tons easier to find what you are looking for. I added a fair amount of additional material. The page count for the first edition was 301 pages; the second edition is 358 pages and has a slightly smaller font to accommodate all the extra material without making the page count excessive. 15 of the 28 chapters (if we include the Foreword) has additional material-some chapters with more additional material than others.

Some of the additional material includes more info on archaeology and the Book of Mormon, Book of Mormon geography, a section addressing geographical influences from Joseph Smith’s environment which are claimed to have impacted the Book of Mormon narrative. It also includes more information on Book of Mormon anachronisms, more discussion on cognitive dissonance and former Mormon exit narratives, brief reviews of the competing geographical models and the scriptures which seem to suggest that the United States fulfills some Nephite prophecies, and updated info on the DNA issue. I draw upon new information from Don Bradley’s 2011 FAIR presentation on my chapter regarding the Kinderhook Plates, and I’ve also added a new chapter on Race & the Church.

What the two books have in common are what they attempt to achieve and the fact that they are both divided into two major sections. Section 1 addresses the basic problems which create and foster doubt as well as the assumptions which can turn into stumbling blocks when faced with challenging issues. This first section (which constitutes approximately 1/3 of the new edition) tries to deal with the root of the problems that can cause Shaken Faith Syndrome. If members can grasp the principals expressed in Section 1 they should be apply those principals to any LDS-critical argument they might encounter. Section 2-relying on the material in Section 1-engages most of the more common LDS-critical accusations such as DNA, the Book of Abraham, Plural Marriage, the First Vision, Joseph Smith and treasure digging, Masonry & the Temple, and lots more.

There is a growing problem with members encountering information on the Internet that conflicts with what they thought they knew about Church history and Shaken Faith Syndrome attempts to put this information in a context of belief which demonstrates that, as the Lord told Joseph Smith in D&C 71:9, “there is no weapon that is formed against you shall prosper.” Once we can put challenging issues in context, they no longer become stumbling blocks.

In this and the other original version of this article, I think you intended "principle" but "principal" ended up in the text.

AWESOME! I applaud this group's work from the bottom of my soul. Way to be "anxiously engaged in good works"! It is only a matter of time, as prophesied by Heber C. Kimball and others, that there is a major falling away in the SL valley. You're either for the Lord (and His people) or you are against Him (and His people). Good luck to the HONEST seeker.