The doctors are on call, and not only today, but also 24/7 since their retirement from full-time medical practice. Under the leadership of Dr. Donald B. Doty and his wife, Cheryl, these physicians make up a Salt Lake City-based team of 40 volunteer physicians and mental health professionals who work as medical advisers to the ever-increasing numbers of missionaries serving in the 405 worldwide missions of The Church of Jesus Christ of Latter-day Saints. Numerous LDS physicians donate full-time service to respond to the health needs of currently serving missionaries, but additional physicians, both retired and still employed, donate time to reviewing missionary applications and screening medical issues. 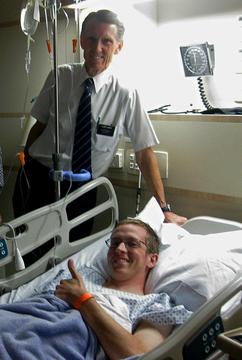 Doty, a distinguished thoracic and cardiovascular surgeon, serves as chair of the Missionary Department Health Services, a task that requires the doctor to be available to his support staff whenever the health of a full-time serving missionary is in question.

Full-time male missionaries are now eligible to serve at age 18, while young women may choose to serve a mission at age 19. That change in age, initiated in October 2012, increased the missionary force from 58,500 to more than 74,000 presently, and it is projected to rise to more than 85,000 by the end of 2013. Senior missionaries, most following retirement, also serve on a full-time basis.

“Our primary objective,” notes Dr. Doty, “is to help provide a more effective work force among the missionaries. It’s our obligation to ensure they each receive appropriate medical care and preventive healthcare instruction wherever they serve.”

Volunteer physicians work in the various geographical areas of the Church both in United States and worldwide. Dr. Mary Beard-Reese, a retired internist and gynecologist from Salt Lake City, currently serves as an area medical adviser for the 19 missions in the North America Central Area of the Church (each mission is made up of 100-250 missionaries). The physician maintains her medical license and carries her cell phone at all times and is available to respond to missionaries in need.

The mission president and his wife offer the first line of defense for ailing missionaries. When questions arise, however, the presidents turn to the area medical adviser.  Dr. Swen and Gretel Swensen, for example, currently serve as missionaries in Frankfurt, Germany, and cover 11 missions and about 2,500 full-time missionaries. Dr. Spencer and Jane Jones, who recently returned from an 18-month term of service in Brazil, shared responsibility with another volunteer doctor for 27 missions and over 5,000 missionaries.

“Usually the mission president’s wife will call Swen with questions about a missionary,” said Gretel Swensen. “He will offer advice on both treatment and facilities.”

The missionary doctors do not continue to practice medicine or obtain licensure in their international fields of service, but they do evaluate and recommend local physicians, clinics and hospitals that provide efficient and effective care for the missionaries. They also rely on a team of additional specialists based in Salt Lake City who will respond to pressing questions in their fields. The international advisers, at the invitation of the mission president, also provide preventive healthcare instruction and guidance as a part of missionary training meetings. A recently completed series of protocols on women’s health issues, distributed to the area advisers, addresses the health issues of the increasing female missionary population.

“We spend much of our time visiting hospitals and interviewing staff members there,” Swensen reported. “We often introduce ourselves and the Church to a community and then build the bridges that will assist the missionaries in times of need. Such background gives the mission president a path to follow, a resource where the Church is known and the missionary program understood.”

Medical needs vary from mission to mission. Cultural and nutritional changes often create challenges for newly serving missionaries. Sometimes their vigorous schedules require an adjustment to the workload of service. In Brazil, for example, missionaries walk all day, every day of their week, according to Jones. “That results in a number of orthopedic problems: knees, ankles and feet require attention. As a part of their regular training, we held exercise sessions to help them implement exercises into their daily schedules.”

Some issues require simple adjustments such as incorporating the strengthening exercise or wisely selecting food and water, but occasionally a critical situation arises. Dr. David Henderson, who served in Bogota, Columbia, reported on the January 2013 bus accident of two sister missionaries near Maracaibo, Venezuela. One received critical head injuries, but after swift response on the ground and consultation with Henderson and resource neurosurgeons in Salt Lake City, the young woman eventually recovered and returned to her missionary service.

All missionary physicians are trained medical doctors. That serves as a “common denominator” to the demands of their missionary service. Many have additional training in specialized fields such as Dr. Henderson, who worked in obstetrics and gynecology during his career. “They all understand the basics of medical care, are trained in the immediate concerns in their geographic areas, but also have additional resources here in Salt Lake,” said Doty.

Additional volunteer Salt Lake City physicians, some retired, but many still at work, serve as advisers in their areas of specialty and regularly respond to calls from the area medical directors worldwide. In such cases, specific diagnosis can guide the prescribed medical treatment wherever it is required.

A third team of volunteers, some 40 physicians and nurses, some of whom are also still working, donate a day a week at the Church’s Missionary Department to review missionary applications for health issues and concerns.

According to Dr. Thomas Boud, a practicing family physician and volunteer screener, every missionary application is accompanied by a complete physical examination report including dental history.

“Most of the applicants are very healthy and you can click them right on through the assignment process,” Boud explains, “but others have a history of congenital problems, recent surgeries or ongoing medical or emotional conditions such as diabetes, hemophilia or depression, which help define their recommended area of service. When a missionary requires regular lab work or readily available medications, it’s important to send them to a location where the appropriate healthcare is available.”

Having healthcare readily available to missionaries in need became a major concern for Church leaders in the late 1980s when a significant number of missionaries in developing countries were ill on any given day. An advisory committee was formed under the direction of Dr. Quinton Harris, a Salt Lake City internist. “The committee was given the charge to prevent missionary illness, to see that missionary illnesses were properly treated and to minimize lost missionary service time,” Harris offered.

Careful analysis of health issues, particularly in developing countries, resulted in the creation of preventive health programs. The committee physicians visited with ministers of health, government leaders and United States embassy health departments to assemble resources within the mission boundaries. The researchers often found that treatment protocols or access to current laboratory equipment differed from country to country. The challenge was to create a standardized curriculum that taught the basics of disease prevention, yet a curriculum that was flexible enough to apply local conditions and concerns.

Today, less than three percent of the missionaries are ill each day, a dramatic reduction of health issues.

In addition, local physicians who are members of the Church are increasingly available to resolve medical concerns in their communities.

After 25 years of research, study and implementation, the area medical advisers function effectively throughout the world to help maintain the health and well-being of the more than 74,000 full-time missionaries.  The volunteer physicians and other medical personnel apply their professional training in that effort, providing an effective support team available to assist in the challenges of keeping all missionaries safe and healthy.