The Little Engine That Could | Meridian Magazine

The Little Engine That Could 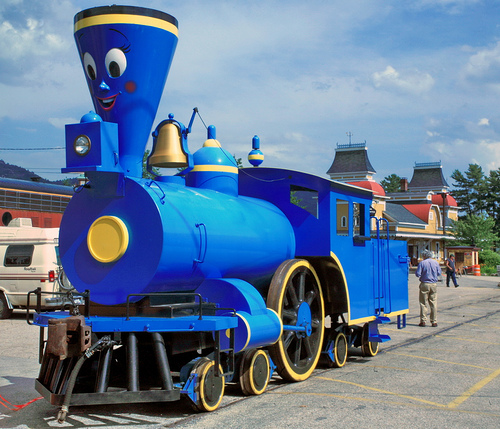 As a child I enjoyed the story of “The Little Engine That Could.” It told of a small train engine, surrounded at the station by bigger more powerful train engines, and the smaller engine was overlooked because of its size. The little engine worked in the train yard shuttling cars from one track to another, and functioning as a support for other trains. One day, a long train chugged into the station. It needed assistance to climb a tall hill to get to the other side. It made its request to a big powerful engine built for big jobs, but the powerful engine said “No” because it was too hard of a pull. Several other engines were asked, and each turned the long train down for one reason or another.

Finally the request was made to the little engine, whose response was “I think I can.” The little engine was hooked up to the front of the long train, and started out for the hill. Over and over it said “I think I can, I think I can”, faster and faster as it built up speed. As it charged up the hill with the long train behind it, the cadence became slower, until just before the top it was chugging “I-think-I-can, I-think-I-can.” Finally, chugging with all of its might it crested the top of the hill, and triumphantly sped down the other side saying “I thought I could, I thought I could!”

Helping You Succeed in Genealogy

As a professional genealogist I often feel like the little engine. People come to me each day with genealogy problems that for them seem insurmountable… and I say “I think I can…” The big difference between them and me, is they feel uncertain and don’t know the ways or the means to solve their family history problems. I’ve had experience, and I have an imagination that tells me it is possible to do; therefore “I think I can.” And I want to help you succeed! You can be the Little Engine That Could!

Over the next several months I will be addressing topics of genealogy research common to all people searching for their ancestors, and will be doing it with the “I think I can” philosophy. This approach will inter-mix professional tips about research methodology with discussions about technological advances that have enlarged the scope of modern genealogy studies. Today we will discuss computer technology and census records. Future topics will cover vital records, immigration, property, and more concepts, applying the impact new technologies have had upon the way records are studied.

Census research is perhaps the most common experience genealogist have as they search for their ancestors. Census records provide us with information about names, ages, locations, occupations, birthplaces, relationships, and in so doing, give us an outline by which all of our continuing research is directed. This data is collected in enumerations taken every ten years. In America this process began in 1790 and continues to the present. In Canada and Great Britain such records began in 1841 and have continued every ten years (on the “1”).

As a young genealogist in the 1960’s, I remember searching census information on microfilm on a name by name basis. Searching censuses often took hours, and each discovery was a tremendous victory. Census indexes were rare and often incomplete. Censuses themselves were only available for Americans up through the 1880 Census, because by law, the U.S. Census is only released for public use after 72 years. In Canada and Great Britain, and elsewhere, census law allows records to be released to the public after 100 years. Today, U.S. Census records are available up through the 1940 Census, and in British countries the records for use go up to 1911.

In the 1970’s as computer technology began to become readily available, companies such as Accelerated Indexing, under the direction of the late Ronald Jackson, began indexing the earliest U.S. and Canadian census records and publishing them for public use. Also in the 1970’s, the Genealogical Department of the Church of Jesus Christ of Latter-day Saints began experimenting with computerized record indexing projects, including an index of the 1880 U.S. Census, and small portions of early English Censuses. These indexes, although primitive by today’s standards, were a wonderful boon to researchers and reduced traditional research time ten-fold.

Over the ensuing years, computer technology has taken the world by storm, including the genealogy community. Today, all available censuses in the U.S., Canada, Great Britain, and in many other countries have been digitized and made accessible by the means of the World Wide Web, the Internet; making these records readily available to the vast majority of the people.

The miracle of computer technology and the digitization of records such as censuses is one of ease of access and use. Hundreds of millions of pages of information are readily available, fully indexed at virtually the touch of a button. What once took hours to search can be uncovered in virtual minutes, or even seconds. Never the less, research is still not an instantaneous process. It is still not one click of the mouse. Original census records were written and compiled by imperfect men, and modern indexes are also the product of imperfect people. It still takes real skill and an “I think I can” attitude to use these wonderful imperfect tools.

Finding a desired ancestor in a census record can be a challenge. Many peoples’ names and information were missed when censuses were taken. Private and often suspicious citizens were less than forthcoming when government officers came poking around for information. Hence a person can’t just “push a button” to find their desired ancestor. Research methods must be utilized when conducting genealogy studies in modern indexed census records, and a good dose of imagination helps!

Before the advent of the personal computer, a genealogist had to hope they would find information in a variety of ways. They used either a published resource (made by others who had their own agenda about the materials being included), or original records viewed on microfilm, or visited the courthouse or record repository and personally examined the documents. With digital images on a computer an individual can now explore original records like being there in person. It can be done from home and in your pajamas. What more could you ask for?

Computer imaging offers something more than just on-site research. Original register documents can be very large and difficult to manage physically. Computerized images can often be manipulated to make a record easier to read and photocopy. Digital census images can be lightened, darkened, adjust the contrast, magnify, and shrink according to the needs of the researcher. Online censuses can be cropped and fitted, according to whatever size of paper is in the printer.

Previously, searching census records in published abstracts or on microfilm limited a genealogist to searching for one individual or family name. More extensive research was very laborious and time consuming. In the digital format, census records can be searched for family names, variations of family names, names of neighbors and business associates, religious leaders, people of the same nationality and birthplace, and a variety of other commonalities. If an individual owned his farm and property, and lived near other land owners in one census, there is a good possibility they lived near one another in another census. Searching for these people with modern technology is simple and easy.

One of the major benefits of digital computerized censuses is the diversity of information that can be sought. With this process we are not simply looking for specific names. Bear in mind that people didn’t always use the same name from census to census. Michael can be Mike, Mickey, or Mitchell. Sarah may be recorded as Sadie or Sally. John could be Jack or Jake, and Nancy could be Anne, Nan, Annie, or any number of nicknames. Middle names or unusual nicknames were commonly used. John A. Brewster may have given his name as “Armistead” using his middle name. Religious-based names may take a Latin Catholic name “Donatus” and transform it into “Donald”. A Scottish name like “McDonald” is synonymous with “McDaniel”.

Sometimes not finding a surname where it was supposed to be may require searching for a name by sound. This is all the more possible with modern technology. I once searched for a German immigrant named Heinrich Tewes. The client pronounced his name “Too-us”, but we couldn’t find it in the census. It finally dawned on us that this was a German name, where the “e” was pronounced like the American “a”, and the “w” was pronounced like the American “v”, giving us the name Taves, or Americanized, it was “Henry Davis,” and that was how we found him in the census. In a recent case the search for “Ferdinand Schaube” turned into a search for all men in that county named “Ferdinand”; the result being that he turned up with the last name of “Shoby”.

Other benefits of digitized census information also allow a researcher to search for multiple terms and locations, such as looking for all men named Samuel with a wife named Rhoda in a specific county or township. This research method can be conducted in Big City research as well, by including time period estimates to minimize the number of possibilities. Such an approach would have been unthinkable in pre-computer days.

Computer research also contributes to broad scale studies such as finding all persons of a particular surname or an unusual given name in a City, County, or State. My mother’s name was Medalou. Born premature (and not expected to live), she was given a name that was a contraction of her parents’ names, Ameda and Lewis. A search of the entire United States in the 1930 Census revealed only one other person with that name and spelling; a search that would have been virtually impossible without the benefit of computer indexing.

Census research is the most basic of genealogy studies, but can sometimes be a hard pull up the steep hill of research and discovery. With the use of modern computer technology, each of us can apply genealogical research methodologies in an “I think I can” effort, and like the little engine, celebrate our success with a joyful “I thought I could!” as we sail down the other side of our Genealogy hill.

I'm so excited to get help with the research aspect of family history! Thank you for your excellent article. I'm looking forward to learning more from you in the future.

Loved this article. To make available basic as well as more in depth advanced information regarding genealogy is an EXCELLENT idea. It will be useful to every one of your readers if they will just take advantage of the information.