THE MOUNDS ANOMALY by Phyllis Gunderson 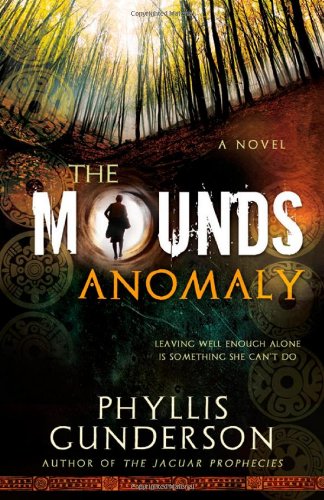 Anyone with the slightest curiosity about North American archeology will find The Mounds Anomaly by Phyllis Gunderson fascinating reading. It’s based on the real contradictions found in archeological discoveries in North America, discoveries that aren’t widely known. Why are these discoveries quickly labeled frauds and the discoverers harassed and dismissed as credible?   Did North American history begin in 1492? Does it make sense to discount artifacts that appear Jewish, Chinese, Christian, or from some other old world culture because they were found in North America? Was the Aleutian Land Bridge really the only possible route early inhabitants could have followed to populate the Americas?

Matilda (Matt) Howard, an accredited archeologist and college instructor, discovers a coin in a bag she used while on a dig in Iraq years ago. Imagine her surprise when she discovers a man found identical coins in a cave in Illinois. However the Illinois discovery is branded a hoax. She knows there is no way her coin could be fake and it makes no sense to her that anyone would counterfeit over 10,000 items and bury them deep inside the mounds found in several Midwestern states. She suspects someone had an ulterior motive for branding American artifacts as phony and clinging to a population dispersal theory other sciences have branded as specious though unlikely. Matt has become an expert on strange or contradictory artifacts, but when she begins to investigate the anomalies she finds in North American artifacts she nearly loses her job and the archeological community, from the Smithsonian on down, refuse to budge from the nineteenth century decree that no advanced civilization ever lived on the North American continent prior to Columbus and that the only inhabitants of the continent were descendants of the nomads who crossed the Aleutian land bridge from Asia to Alaska.

Matt is a middle-aged, over-weight, tactless, not particularly attractive woman, obsessed with archeology. She has a ten-year-old adopted daughter who is sometimes more parent than child. The two love each other and Matt often feels guilty for occasionally putting her obsession ahead of her child. Her search for answers takes her across the country from Arizona, Colorado, Illinois, Oklahoma, Washington D.C., Michigan, and to New England. Over and over she finds evidence that contradicts the accepted archeological theory, yet she knows to pursue the matter will cost her job and reputation. Her experience teaches her some valuable lessons concerning truth, patience, science, and motherhood.

This book features a real mystery, real discoveries and the controversies surrounding them, and relates a number of theories concerning people who may have once visited or lived in North America. It’s an amalgamation of archeology and science blended into an unusual, but fun novel. There is some mention of Mormons, but nothing specifically linking any of the discoveries to Book of Mormon civilizations, though I suspect most members of the Church will see possible connections. There is also mention of John Wesley Powell who was the first director of the Smithsonian and the son of a preacher in Palmyra when Joseph Smith lived there. At the end of the book is a detailed chapter by chapter explanation concerning which elements of the story are fact and which are fiction. There is also a bibliography.

Any reader, male or female, young or old, looking for a change of pace read as well as those interested in archeology will find this novel fascinating.

Phyllis Gunderson lives in Utah, though her lifetime interest and college minor in archeology have taken her to England, Thailand, Cambodia, Belize, Egypt, India, and China. She has a Masters in teaching English as a second language. She also found time to raise eight children and thoroughly enjoys being a grandmother now.

L. Tom Perry in the 2012 Ensign: "the United States is the Promised Land foretold in the Book of Mormon". I decided to investigate with real intent and have been sincerely convinced that Lehi's family arrived at the Promised Land (United States). Others came to the Americas and have scattered. Read the scriptures for more understanding and notice the change in the 2013 index for Sidon, River...it doesn't flow to the north anymore. (What did Joseph Smith infer by saying Zarahemla was across the Mississippi?)