Everything I Know, I Learned From My Dog | Meridian Magazine

Everything I Know, I Learned From My Dog

I think it was about the third time that I told someone how I got along with the mean cat my family had when I was in high school because I understood that he was just insecure about losing his eye sight, that I realized that I tend to project my own feelings on to the world around me. I did finally get glasses when I was 18, and even though I do project, I stand by the fact that Freckles was dealing with the same issue. Too bad they don’t make cat glasses.

Sidenote: I’m not really a cat person anymore. Maybe it’s because my host family in Vienna had one household rule, “whatever Beethoven says, goes.” Unfortunately, Beethoven was a feline, not a dead composer, and he left a layer of hair on my backpack so thick I couldn’t see what color it was anymore. Or maybe I’ve transitioned to a phase of life where I need unconditional love much more than I can handle persnickety, selective love. Point is, I’m a dog person now.

Our dog’s name is Lucy (in my heart, her full name is Lucille Ball Proctor), and her mother’s name was Kissy kissy’ and for good reason. Our little cockapoo got a healthy download of the affectionate nature that coined her mother’s name. My mom repeatedly tells her, Lucy, I’m not a dog person’ and she just jumps up on her lap completely undeterred. 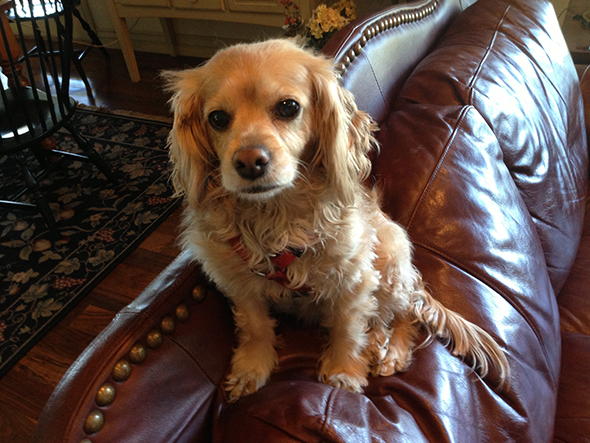 Lesson One: complete confidence in one’s own desirability and in the worth of even people who say they don’t like you. Lucy pays no attention to the naysayers. She knows how cute she is or maybe she wants to love and be loved too much to stop and worry that she might not be cute enough (she is.), but I stand in awe of the way she barrels into people’s arms with such confidence. This isn’t always the answer for a person—-I mean, read the room–but I feel like I spend a lot of my life kicking at the dirt and wondering if I’ve got a single quality worth loving. And all that time wasted wondering could’ve been time spent developing and serving.

The Internet at the YMCA I was staying at this past week only worked in the lobby, and one night while I was just finishing emailing someone, wearing basketball shorts and a sweatshirt, a young man approached me and asked whether I’d like to have a drink with him. I told him I didn’t drink (all the while taking little sneaky steps closer to the elevator) so he said we should go for coffee. I said I didn’t drink coffee either so he said, soft drink! What about going for a soft drink?’ I said no, and I figured that was that.

The next night, he saw me come down to use the Internet and he jumped out of his seat at the sight of me. I stepped back in the elevator, let the doors close and went straight back up to my room. (I’m not super graceful at rejection). The day after that, I saw him again, only this time I had headphones in and pretended not to notice. When I exited the building I pretended not to hear him calling after me, but after he starting chasing me down the street it was just rude not to say something. He walked me all the way to the subway asking me about my interests and my life and telling me about his.

His bravado was staggering, but you know, he kind of grew on me. It doesn’t matter because I don’t live in New York, but Earnest Neal (that’s what his name is in my phone) taught me that people can be as audacious as Lucy and, with enough confidence and real genuine interest in that other person, win over even the naysayers.

Perhaps other pet owners would resent this about an animal, but Lucy is the most persistent seeker of food (all-sorts) imaginable. My brother has lost no less than 3 gourmet sandwiches to her sneaky doggedness (ha! Did you see what I did there?). She is extremely obedient if you tell her no,’ but if you forget to say it, that slice of ham or bowl of ice cream residue is as good as hers.

Lesson two: Tenacity. I’ve learned from Lucy the power of knowing what you want and keeping at it until you get it. To have specific goals, specific desires is the only way you ever get to write your story to be what you want it to be.

Lucy taught me another lesson this week, really vivid and traumatic. I took her on a hike (exercise for us both) and before we ever got to the good part where foliage opens up to views of grandeur, two big dogs came down the path going the opposite direction. I stood in front of Lucy hoping they’d just pass by, but they came from each side around me towards her and what appeared at first to be harmless introductions escalated in an instant, and suddenly this big flat-faced monster dog had Lucy in his mouth and was shaking her around. I was screaming out no,’ kneeing the beast in the face and feeling totally helpless. I’ve never felt so immediately inadequate in my life.

Lucy ended up with a puncture wound the size of a tiger’s canine tooth in her back leg. She was shaking and extra clingy the rest of the day, but even as it was happening, I knew that she would come out of this still walking confidently through life. I knew she wouldn’t be permanently afraid of all people or all hikes or all other dogs for the rest of forever.

Lesson three: Resilience. From where I’m standing, the first two Lucy-traits aren’t much use if the first person that tells you that you can’t or the first person that really breaks your heart leaves a permanent and impenetrable wall around your soul. If your unconditional love and creativity for problem solving, are actually dependent on never being seriously disappointed, then you won’t get very far.

Why is that we become so branded by the people that turn us away, but we completely ignore the dozens of other people that think we’re so worth caring about? I realize in this scenario that I’m comparing being clamped in the terrifying jaws of a mastiff to being heartbroken, but if I’m honest, that’s sometimes what it feels like. Oh to come back from something like that as confident and resolute as you ever were.

I guess what I’m saying is, I want to be more like Lucy. Even though she only weighs 10 lbs, she teaches me about strength a little more every day.

I love your thoughts on dogs and the lessons we can learn from them!

I loved the article. I have been a dog person my whole life, along with a few cats.