Take Me Out to the Ball Game: With Books!

Summer is the time of year to enjoy the outdoors and watch baseball and other sports. Here are some great books about different popular sports that enthusiasts will definitely enjoy! Except for the picture books noted below, the rest of the books are good for ages nine through adult. 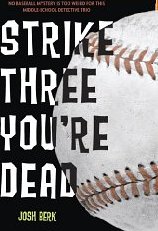 Strike Three You’re Dead, by Josh Berk, is an entertaining and humorously written mystery that will grab ages nine and older from the very first sentence! Lenny loves to mimic baseball announcers so when he gets a chance to enter the “Armchair Announcer” contest he’s thrilled when he wins. But he and his 3 friends witness something very peculiar at the baseball game and they begin to unravel a mystery that only they notice about one of the major league players. They also find themselves on the run from danger. The story-line keeps you completely engaged to the very end, making this a perfect read for reluctant readers!

Good Sports: From Hardships to Championships, by Glenn Stout, is a smallish sized nonfiction paperback and features five famous major league baseball players and how they overcame difficult situations that negatively affected their lives. Babe Ruth had a very difficult childhood where he continually got into trouble. But his life changed when he discovered baseball and a priest at the St. Mary’s School for Boys who took time and care to rebuild Babe’s self-identity. Other players featured in this book includes Jimmy Piersall’s battle with mental illness and Torii Hunter’s positive outlook in life defying his extreme childhood environment of drugs and gangs. “Against All Odds”, also by Stout, showcases football and basketball players, as well as the St. Louis Cardinals in another “Good Sports” series. Some of the players featured include Tim Tebow and Roy Riegels and each chapter shows how each player or team overcame great difficulties. 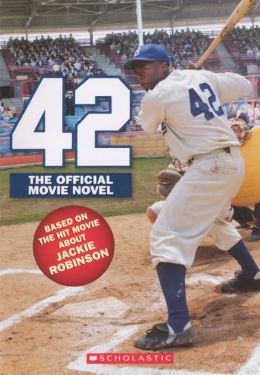 42 (The Jackie Robinson Story), by Aaron Rosenberg, is an adaptation from the screenplay of the movie of the same title. This paperback is a terrific read about a great player and an outstanding person. There are many good character traits that are portrayed here that helped Robinson overcome difficult prejudices. The book is geared for the younger reader making it a perfect fit to uplift and teach about strong positive influences in a life.

Down to the Last Out: The Journal of Biddy Owens (The Negro Leagues, Birmingham Alabama, 1948), by Walter Dean Myers, recounts the difficulties of playing baseball as a black man during this time. This story, written as journal entries, not only shows the deep prejudices, but how the love of the game overcame all.

The next four books are picture books that are good for all ages. 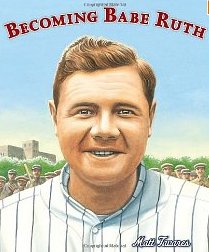 Becoming Babe Ruth, by Matt Tavares, is a beautifully painted picture book that depicts a brief account of Ruth’s difficulty as a young child – being left at the St. Mary’s school at the age of seven, the tremendous influence of Father Mathias and his love and talent for baseball. There’s even a listing of Babe’s hitting and pitching stats listed on the last page.

Take Me Out to the Yakyu, by Aaron Mechon, celebrates not only America’s favorite past-time, but Japan’s as well. Every open page spread showcases how America enjoys the game and exclaims approval, and on the opposite side, Japan is represented. For instance, hot dogs and Cracker Jacks are found in the bleachers in the U. S., but in Japan there are soba noodles and edamame. The acrylic pictures are bright and rich throughout the book.

Slugger, by Susan Pearson, and illustrated with acrylic, pencil and ball-point pen by David Slonim, has quite a unique story-line. It deals with a slug, Ollie, who wants to play baseball. But the huge problem is he doesn’t have arms or legs, but this doesn’t stop him and he figures out how to overcome this obstacle. Even though this reads with much humor, there is a great lesson to be learned at the same time.

A Baseball Story, by Richard Torrey, is a simple book about the basics of baseball and the preliminary practice routines that take place prior to playing the game. The backdrop is actually a story about a youngster about to play the game. This is a perfect story for kids wondering about what takes place in baseball or desiring to play the game.

Game Changers: Play Makers, by Mike Lupica, is book two in this series and this story has Ben determined to become the best point guard in his basketball league. But he has to compete with a new boy who just might beat him out. Lupica is one of my favorite authors of sports books for ages nine and older and this book does not disappoint.

Basketball: From Tip-off to Slam Dunk – The Essential Guide, by Clive Gifford, is a nice basic book filled with diagrams and photos that outlines and defines the fundamentals of the game. “Soccer Skills”, also by Gifford, has a similar format that features skills needed to be successful in soccer.

Holly, you and your readers may also be interested in a wonderful book written by Pulitzer Prize winning author Doris Kearns Goodwin. The title is Wait Till Next Year. It's a memoir of her growing up in New York in the 1950s. She and her family are in love with baseball--especially the New York Dodgers. The love of baseball played a major role in her childhood. A delightful read!! From one of your fans--Sheryl Anderson, Logan, UT.