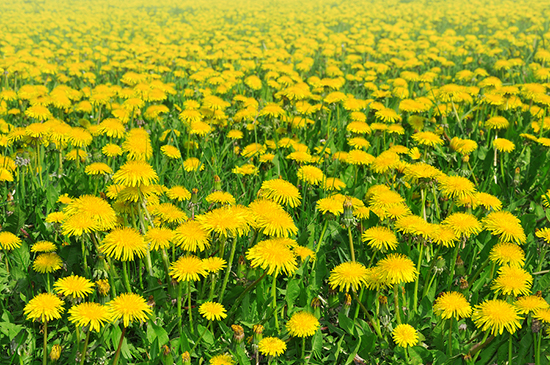 I really hate dandelions! They take over my yard, turning my lush, green grass carpet into a sea of yellow. I was sure the problem must be some neighbor. The dandelions from their yards must blow onto mine. I was positive that had to be the case because I had meticulously dug out every one of the dastardly weeds. I loaded on weed-and-feed, heavy on the anti-weed formula. I thought that would take care of the problem, and my yard was great for a while, but then the little yellow aliens appeared again.

I pulled out my weed sprayer. I meant business this time. I loaded in the herbicide, doubling its strength. It was strong enough to knock down an oak at fifty paces. I went around the yard, spraying anything that had any resemblance to a dandelion, or any coloration close to yellow on the light spectrum. I sprayed with enough spray that if they didn’t die from the poison, they would surely drowned. I sprayed a swath a foot in diameter around them. I was determined to make an example out of any dandelions that came near my yard.

My yard looked good – good of course meaning everywhere except the brown circles where I sprayed the dandelions. But then, in about a month, they were back again. I could swear they were not only back, but they had come back with more ferociousness than before. They were everywhere.

I launched an all-out assault, even spraying along the roads and along all of the neighbor’s property lines. It was all my wife could do to keep me from spraying the neighbors’ lawns. You’ve heard of the mysterious alien crop circles? Well, this would be the case of the not-so-mysterious lawn circles. Everything looked good, at least everything that had survived the onslaught and wasn’t brown. Then, in a month, there they were again, multiplied exponentially from the days past.

I couldn’t believe it, I had done everything I could think of, outside of enclosing my whole yard inside a building. I was just about to consider artificial turf when I had a revelation.

In all my frustration, I walked out, and there was my four-year-old. She had two handfuls of snowy white, very ripe, dandelions. She would walk around the yard, and then she would whirl around like a ballerina and watch the vivacious little seeds swirl into the lawn all around her. When all the seeds were gone from the stems, she would throw them down and walk out across the neighbor’s field, bring back some more, and do it again and again.

Trying to be the tactful father I am supposed to be, I swallowed the frustration out of my voice as I asked her what she was doing. She grinned. “I’m planting you flowers.”

“Yes. Every time I go to pick you some, the ones in our yard have died and turned brown, so I have to go a long ways to get some to replant them. I have to keep going farther and farther. But don’t worry Daddy, I will always have some for you.”

Suddenly my heart felt funny as I inquired further. “Why do you want to plant them for me?”

“Because,” she said as she hugged me, “God named them Daddy Lions’ after you, so I could show you I love you.”

With that she pulled a handful of smashed, yellow flowers from her pocket and showed them to me. “Aren’t Daddy Lions pretty?”

“Yes, sweet heart, Daddy Lions are pretty.” With that, she skipped inside to put her little treasures in a cup of water.

You know what? Dandelions add so much to a lawn. I can’t imagine why anyone would ever want to get rid of them.

As one who has battled dandelions I felt for you . I will never think of dandelions the same way again. Bob