Time for Some Mormon Myth Busting 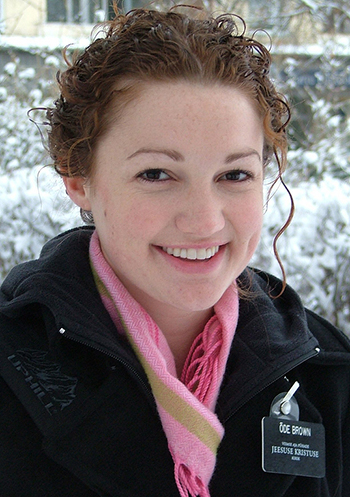 The Book of Mormon Musical, which has been wildly successful, portrays LDS missionaries as hapless, insular and nave-incapable of comprehending both the people that they teach and the gospel they profess. In a recent article in Real Clear Religion, Betsy VanDenBerghe busts those stereotypes with a truer picture of what a Mormon missionary is really like, calling on some of her own experiences as a sister missionary in Brazil.

She takes on the myths, writing:

It’s an insular bubble protected from the world. I don’t know about you, but outside of an LDS mission, I’d never met anyone who’d killed someone, didn’t know how to read, had family members slaughtered by gangs, or, for that matter, played soccer in the World Cup. I’d attended college and graduate school, lived on both coasts and abroad, and worked in an urban mecca, but never came across anyone tormented by evil spirits.

Sure, on a mission, you aren’t supposed to go to movies, call your friends, or surf the net, but — take my word for it — not perusing the New York Times in no way buffers missionaries from being exposed to urban warfare, natural disasters, or some of the most repulsive personal and home situations imaginable. You’re walking into people’s homes and lives continuously, and those who let you in, “investigators,” aren’t usually flourishing. Even investigators whose lives include stability, education, and prosperity provide missionaries with an endless supply of doubt, scriptural challenges, and existential questions. If complete insulation from worldviews questioning God, religion, Mormonism, or the meaning of life is a goal, I’d suggest avoiding an LDS mission.

Missions foster intolerance. A family friend’s first email from Africa seems representative of the concussion that is mission arrival. Shocked-induced sentence fragments described showering from a bucket and no vestige of stop lights, familiar food, or dependable electricity. Initial training in French left him unable to comprehend anyone, including his African companion, and over and over, he wrote, “Pray for me.” Some great LDS fiction captures the surreal entry into a mission because every LDS missionary, even serving in Iowa, encounters environments far more rural or sophisticated, poverty-stricken or affluent, exotic or mundane than he or she is accustomed to.

But even more interesting than the greenie phase is the arc transporting a missionary from revulsion to begrudging acceptance to appreciation — which segues into an assimilation so complete, the elder or sister becomes about as Brazilian, African, Californian, or Russian as non-natively possible. Even the families of missionaries vicariously enter this cultural tolerance in strange ways. You can’t help but be grateful, as I was, when your missionary son in Germany encounters devout Lutherans who invite him in from a thunderstorm to pray and gets treated respectfully by most of the European agnostics he talks to. You also form a sense of kinship with the group of Muslim youth who witness a gang of punks physically assault him and not only ward off the punks, but make them shake my son’s hand and apologize. Ditto for the good Buddhists in Taiwan who plied another son with endless meals and hospitality, and the now the good Buddhists in Thailand who’ve convinced my newly arrived third son that “Every Thai is kind. Honestly, there are no mean Thais.”

Which brings me to another best kept secret of Mormon missions: We learn from you.LDS missionaries are not, as I’ve read that Book of Mormon elders facetiously portray, completely impervious to the wisdom of those we live among. Let’s return to the movies, specifically Disney’s rendition of LDS General Authority John Groberg’s Tongan missionary experiences in The Other Side of Heaven. While definitely Disney-esque, the film goes beyond the real-life adventures of excruciating heat, rats eating the missionary’s feet, drunken hoodlums menacing him, and hurricane-induced starvation almost killing everyone; it also explores the resentment the island’s Christian minister feels toward Elder Groberg.

The relationship takes some interesting turns until, in the hurricane’s aftermath with no food arriving on the island for weeks, the minister gives Elder Groberg his last jar of food — an act that saves Groberg’s life and enables him to play his trumpet at the minister’s funeral a few days later.

… Finally, yes, we do proselytize, which is probably the most distasteful aspect of missionary work to a secular society bent on celebrating every expression but that of religious faith. Missionaries of all denominations live under the shadow of stereotypes like The Poisonwood Bible‘s Nathan Price, a Baptist missionary in Africa whose fanaticism imperils lives and souls. Interestingly, I’ve met evangelical families and youth groups proselyting in Haiti, Manaus, and elsewhere, and never encountered a Nathan Price, only people who work in orphanages, ghettos, and hospitals who also take the New Testament charge to preach the gospel “unto all the world” at face value. I once sat in a dinner group of editors and writers, one of whom expressed aloud his revulsion that my religion produced missionaries who turned diverse and interesting people into uniform and boring ones. To my relief and amazement, a woman from New Zealand piped up that the Mormons had done wonders for some of the Maori population whose conversions resulted in decreased alcoholism, domestic abuse, and unemployment.

Conversion is a mysterious thing. Honest missionaries marvel at the complex process between the seeker and God, and facilitate rather than view themselves as prime movers in the phenomenon. The missionary’s job is not, as skeptics would have it, about talking innocent people into believing the likelihood of arks floating, Red Seas parting, water turning into wine, or, in my religion’s lexicon, angels giving Joseph Smith golden plates that become The Book of Mormon. Instead, missionaries encourage people to pray, read scripture, and hopefully enter into what William James called The Varieties of Religious Experience, from Paul’s Damascus Road to C.S. Lewis’ surprises with joy to Sigrid Unset’s embrace of Catholicism that rattled Scandinavia’s respectably atheist intelligentsia. “Knowledge about life is one thing,” wrote James. “Effective occupation of a place in life, with its dynamic currents passing through your being, is another.”

Betsy VanDenBerghe is a writer based in Salt Lake City and served from 1986-88 as Sister Siddoway in Sao Paulo, Brazil.

This article is beautifully written and shares some great insights into the life of a young missionary. However, my favorite part was seeing my daughter's photo as a missionary who served her mission in Estonia, Ode Brown.

Bravo! Hits the nail on its' proverbial head, and certainly explains my own missionary endeavors of long ago, to a nation of ex-Nazis, most of whom weren't all that 'ex.'