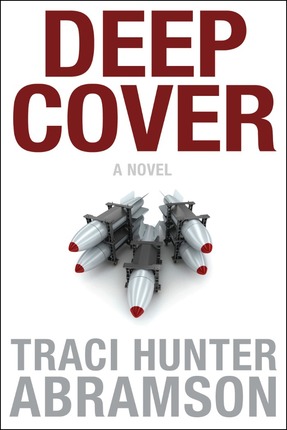 Deep Cover by Traci Hunter Abramson is a book that will keep a reader pulling an all-nighter and loving every chilling moment. This story just may be Abramson’s best novel yet.

Kelsey Weber is a CIA agent who has gone deep undercover as a tutor for Salman Nassar’s daughters in his desert compound. When her handler’s identity is discovered, he is murdered while trying to keep her cover intact. Nassar shoots her in the leg, not because he suspects her involvement, but merely because he wants to make an example of his power, she’s a woman and women don’t matter, and she strayed where a woman shouldn’t. Kelsey is cleverly retrieved by the CIA from the hospital where she is taken and returned to her parents’ Virginia home to recuperate. Her parents aren’t there, but are serving a mission. She has a shocking meeting with a neighbor charged with looking after her parent’s home.

The neighbor, Noah Cabbott, is an FBI agent and the two are quickly drawn to each other, though Kelsey is at pains to keep from him what she does. Their friendship almost falls apart when they are both assigned to a joint FBI/CIA anti-terrorism task force and Noah discovers a great deal of what he thought he knew about Kelsey are lies and that she is the woman Nassar’s agents are searching for. He also learns she has a great deal more authority and knowledge than other members of the task force along with two other aliases. She also reads and speaks Arabic fluently. Because much of her work is highly secretive with strict need-to-know restrictions, she too frequently has to keep secrets from Noah, which frustrates him and makes him wonder if he knows her at all and if a future together is even possible.

It’s apparent Nassar is planning some kind of major terrorist attack and someone within one of their agencies is a mole feeding information to him. Because of her intimate knowledge of him and his cohorts gained over two years at his compound, she identifies his sons and other figures involved with him and his plans. A fall aggravates her wound, forcing her to give up her cane and go back to crutches, but she is needed too badly to stay home and give her leg the rest it needs. To her annoyance a former boyfriend is assigned to be her driver.

Kelsey is a strong character who does difficult things and does them well even when great personal sacrifice is called for. She’s not only strongly patriotic, but she feels a strong inclination to protect others. Becoming a CIA agent was almost an accident, something she was talked into trying by her former boyfriend when they were both college students at BYU. It was his dream which she went along with so they could be together. They were both accepted, but their assignments took them in different directions. She has missed her family during the two years she has been undercover and is aware her vague correspondence delivered through the agency and her failure to attend family holidays and events has hurt them and left an impression that she is selfish and uncaring. Honor, loyalty, self-sacrifice, and concern for others aren’t just words to her. She’s also proficient in the use of weapons, self-defense techniques, analysis, and bomb disarmament. Deep down she is torn between a desire for a husband, children, to go to Church each week and her commitment to serve where her special talents and training can save lives.

Noah too is a strong character who is trained in weaponry, but is strongest in analysis. He wants and needs a family and a home since his parents and siblings were killed a few years earlier in a car crash. His male ego takes some hard hits from Kelsey and the circumstances they find themselves in, but he’s not hung up on his physical prowess, or always being in charge. Both Noah and Kelsey grow to realize their own and each other’s potential and discover how far each can go to achieve what matters most.

The plot moves quickly and is satisfying, though nerve wracking at times. The author’s familiarity with the various law enforcement agencies, Washington D.C. and the surrounding area enhances the story’s realism.

Traci Hunter Abramson is originally from Arizona. She graduated from BYU and is a former employee of the Central Intelligence Agency. She has written a dozen other thrillers and has been a Whitney nominee multiple times. She, her husband, and children live in Virginia where she teaches swimming and writes.