Journey of Promise by Vickie Hall 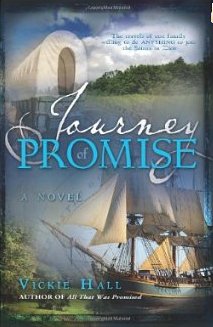 Richard and Leah Kenyon’s story of preparing to leave Wales and their journey with other Latter-day Saint converts to America is not a new theme for an LDS novel, but it is particularly well done. Journey of Promise by Vickie Hall is her second book dealing with these characters, but it is excellent as a stand-alone novel.

Richard and Leah struggle to raise the money for the voyage to America while being the object of persecution in their small town.  Richard’s niece lives with them and Richard must raise enough funds for her trip as well.  Leah’s sister and her family plan to travel with them as do several friends from their small branch.  The family business is not doing well, but Richard struggles to keep the shop open for the sake of his two employees, one of whom is sweet on his niece and entrusts his savings for the trip to Richard.

The persecution is mostly directed toward them by the local minister.  Disaster befalls them and they must begin saving again.  Leah’s sister’s family which includes two small boys, a young couple and the wife’s elderly foster mother, and Richard’s young employee put off their journey for a year too in order to travel with the Kenyon’s and his niece once their finances are replenished.

The ocean journey is filled with difficulty and they are treated badly by the first mate and sometimes the captain.  One of their party dies before reaching New Orleans and a baby girl is born to Leah’s sister.  Arriving in New Orleans doesn’t end their trials as they embark almost immediately on a riverboat headed upstream to the place where they will winter over until spring when they plan to begin their journey west.  The wide, muddy river brings them more difficulties and sorrow than some of the party feel capable of dealing with.

This small group of a dozen people faces some severe trials of their faith as they seek to follow the admonition of their leaders to join the body of Saints in America. The characters feel real as do their trials and disappointments.  Sometimes they serve as supports to each other, yet they each face problems and doubts that only their own faith in God can carry them through. Though Richard and Leah are the main characters, the other characters play strong roles and the story sometimes switches to their points of view. The relationships between the three married couples are each different and in a sense are the stories of three different types of marital relationships.  The young courting couple adds a touch of romance and one of the strongest and most important aspects of the story are the loving relationships between the sisters and between parents and children.

Journey of Promise does not present a lot of new material concerning the hardships faced by those who left their homes on one side of the ocean to travel to the other side to join with other members of the church and the story doesn’t contain a lot of surprises, but it does so with characters the reader can identify with and feel through them the struggles as though facing them firsthand.  It’s a reminder that, then as now, the immigrants met cruel and malicious people who were quick to take advantage of them, but they also met good, kind people who went the extra mile to help and serve.  It’s also a reminder that not only the dangerous ocean voyage and the trek from the Mississippi to the Salt Lake Valley were great trials for many of the early converts, so too was the journey from America’s port cities to St. Louis where the wagon or handcart companies began.

Vickie Hall is a native of Utah, but has lived in several other states.  In addition to writing she has a love of history and of music.  Her music has been recorded by the Westminster College Women’s Choir and by several LDS artists.