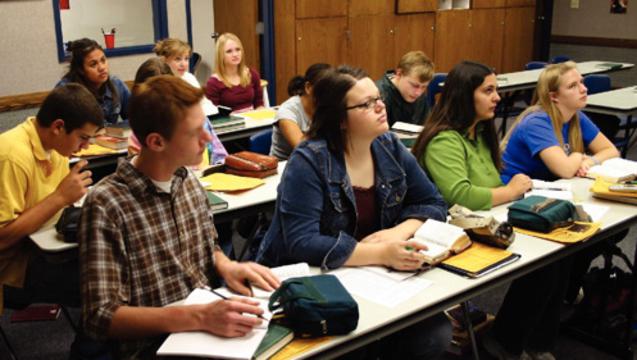 Enrollment in the youth religious education program of The Church of Jesus Christ of Latter-day Saints, known as seminary, has increased to 390,000 – the highest enrollment ever.

Seminary enrollment has grown steadily for the past few years, but this school year’s increase is more than double that of the previous one. Part of the reason for the increase may be the combined efforts of Church leaders, seminary teachers and staff to bring more students to seminary.

The seminary program was created over 100 years ago.  The program now reaches teenagers in 150 countries. It is open to teenagers of all faiths and is taught in a variety of formats (early-morning, release-time, home study, etc.).  Seminary classes are available all around the world. Students attend classes at different times in different areas. In locations where there is a significant concentration of Church members (primarily in Utah, Idaho and Arizona), students may choose to attend a seminary class during their regular school day or before school. Outside of those geographic areas, students usually gather in the early morning before school to study together. There is also a home-study option.

The seminary curriculum focuses on a different volume of scripture each year, rotating between four courses: Old Testament, New Testament, Book of Mormon and Doctrine and Covenants and Church History. The combination of Sunday and weekday religious study has helped Mormon youth build strong scriptural knowledge.

Church leaders are also asking seminary students to reach out to friends during the current school year. In May 2012, Elder M. Russell Ballard of the Quorum of the Twelve Apostles encouraged all currently enrolled students to invite one friend to attend a seminary class with them the next fall. Hunt says Elder Ballard’s challenge has already motivated many students to share their positive experiences in seminary and to ask friends to join them.

According to a researcher for the National Study of Youth and Religion, “Compared with other teens, [Mormon youth are] more knowledgeable about their faith, more committed to their faith, and have more positive social outcomes associated with their faith.”  One Christian author wrote that “Mormon teenagers tend to be the ‘spiritual athletes’ of their generation, conditioning for an eternal goal with an intensity that requires sacrifice, discipline, and energy.”

This devotion often continues into adulthood. A 2010 study from the Pew Research Center shows that Mormons score among the highest of all religion groups in their knowledge of Christianity, the Bible and other religious information.