Romance and Suspense in Tide Ever Rising | Meridian Magazine

Romance and Suspense in Tide Ever Rising 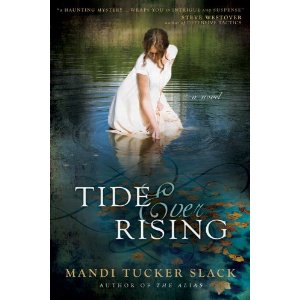 Tide Ever Rising is a new romantic suspense novel by Mandi Slack. It begins with Kadie and her sister, Maysha, exploring ghost town ruins near Eureka, Utah. No, I didn’t misspell the sisters’ names and I’ll admit those names and a child’s name that appear later were a pain and a distraction for me all the way through the story.

Kadie, a high school history teacher discovers a journal under a rotting floorboard of an old burned out house. She’s intrigued by the old journal and wants to find the owner, Charlotte, or her descendants, and return it to its rightful owner. Maysha is less enthused and wants nothing more to do with ghost towns or for that matter ghosts. Kadie’s computer search for the journal’s owner is interrupted by a call from her fianc, a mama’s boy the reader soon dislikes. With a week remaining until school starts and not being anxious to spend the next day with her fianc and his mother, she persuades her sister to accompany her on a road trip to Washington to find Adelaide, the twin sister of the journal’s owner.

The adventure truly begins when the sisters meet the grandson of the elderly woman they’ve traveled so far to meet. The elderly sister of the journal writer is feeble and near death, but she is thrilled to get her sister’s journal. A journal entry leads Kadie and Adelaide’s son, Logan, to a confrontation with a former senator and his son, a kidnapping, and several encounters that leave Kadie believing she is either going insane or Charlotte’s ghost is haunting her. Their adventure takes them from being lost in the Olympia Forest to searching an underwater cave. It also leads Kadie to wonder why she’s engaged to the fianc back in Utah.

This story begins slowly and doesn’t hit its stride until the sisters are in Washington. It could stand tighter editing, but it’s a fun read. The possible ghost is intriguing and the scenes that take place in the forest are particularly well written. Kadie is likable, but I was disappointed in some of the sisters’ inconsiderate behavior toward each other. For a prominent attorney who has handled a number of big cases, I found Logan a little too impulsive. I would have expected him to think more before he acts and to behave in a more mature manner.

Though the author spends a little too much time setting up both the mystery and the romance, once they begin they keep the reader turning pages. The Ephraim to Pacific Northwest contrast in settings is well done. The “ghost” aspect is handled tastefully and doesn’t distract from the story’s believability. Bringing in a touch of genealogy provides a great tie in between the past and present and is a nice touch connecting two mysteries. The author shows great promise in this novel and is an author worth watching.

Mandi Slack began life in a small Utah coal town, then she traveled to many places when her father joined the Army. She attended the College of Eastern Utah, but graduated from Utah State University. She is married and has three children. She loves to rock hound and camp.

Thank you for the review! I'm very grateful.