Fully Invested in the Most Heavenly Ways | Meridian Magazine

Fully Invested in the Most Heavenly Ways 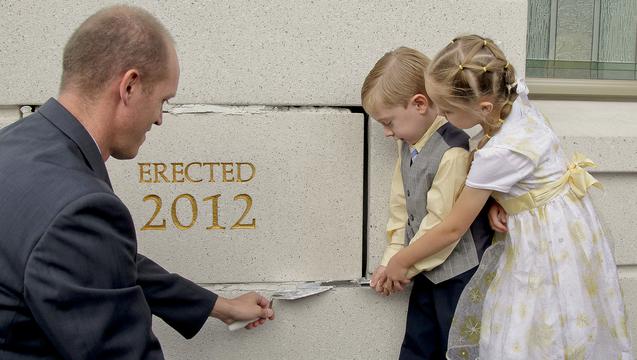 I enjoy Elder John H. Groberg’s style of writing. His recently published book, Refuge and Reality – The Blessings of the Temple, is about his experiences while serving as president of the Idaho Falls Temple. One of the first things he taught me in this new book is that he often heard Temple patrons lamenting, after being filled with the Spirit through Temple ordinances, that they had to go back out into the real world.  As President Groberg thought about that, he finally concluded that no, the Temple is the real world. Outside is an unreal, artificial, temporary world.

President Groberg also concluded that many Saints have been faithful and patient with wayward husbands, wives, children, but have not experienced, as others, a happy outcome. “As I pondered these seeming contradictions,” he wrote, “it was as though I heard a soft whisper saying, In my own time and way every promised blessing will be received by the faithful'” (page 103). I also believe that in the eternities no blessing will be denied the faithful. The promises are sure.

For a moment I want to pursue another angle: not only being “Fully Immersed” but also “Fully Invested.” I am aware that that phrase has a financial context, and in recent years even a BYU football context. But those usages are very temporary and transitory. I am interested in the notion of “fully invested” in an eternal context.

Being fully invested means being fully endowed. The Spanish word for the endowment is investidura. A person who is endowed is investido. The term means, as it does from the Greek, clothed upon-that is, clothed with a sacred gift of knowledge and power.

The holy endowment is not simply what we call “a session.” The endowment begins with one’s baptism, then continues with the receipt of the gift of the Holy Ghost, then (for males) priesthood ordination, then the initiatory or preparatory ordinances, then the hour-and-a-half instruction session with its veil ceremony, and finally culminating in the sealing ordinances. All of these steps-from baptism through sealings-constitutes the endowment, culminating in the ordinances that bind us to each other in families, and bind us to the eternal family of our Father and Mother in Heaven.

All of these instructions, covenants, and ordinances make us fully invested, clothed with eternally valuable knowledge and with glory-with power to help fulfill the grand purposes of our Father in providing immortality (duration) and eternal life (quality of life) to the children of God.

I agree with Elder Groberg that we should make the Temple a bigger part of our life. Several years ago, some dear friends encouraged us to go to the Temple every week. Although we were faithful Temple-goers before, when we started going more often we found ourselves immersed in heavenly light and truth that literally changed the course of our life. Once a month may have been sufficient in times past, but now with the waves of darkness and evil, we need to go more frequently. Becoming more fully invested can truly make each of us a better person and give us more joy.

President Wilford Woodruff said that if “the veil were lifted off the face of the Latter-day Saints [and they] could see and know the things of God as they do who are laboring for the salvation of the human family who are in the spirit world . . . , this whole people, with very few, if any, exceptions, would lose all interest in the riches of the world, and instead thereof their whole desires and labors would be directed to redeem their dead.”1

Joseph Smith taught that “the greatest responsibility in this world that God has laid upon us is to seek after our dead”2 and “those Saints who neglect it in behalf of their deceased relatives, do it at the peril of their own salvation.”3

If someone invited you to a certain place, and if you went, you would receive $10. million, would you go? Why don’t we understand? The treasures of the House of the Lord are worth more than millions of dollars, or billions, or trillions . . . we are talking about the riches of eternity!

Luke 19:47 reports that Jesus “taught daily in the temple.” He still does.

Ah, youth. I believe in months and years to come we will be watching their increased involvement in missionary work, and their increased involvement in family history and Temple work. Missionary work and Temple work-for the living and the dead-that’s everyone. And this work, for the living and for the dead, is righteously addicting.

Today’s youth are better prepared to deal with what lies ahead. And there is no need for surprise or shock when entering the Temple and seeing what we do there, and what we wear there. If youth grow up studying all the scriptures, including the Old Testament, where sacred clothing is described in some detail, there will be no “shock and awe”-only awe!

President John Taylor gave us a warning: “We are told that Many will say to me in that day, Lord, Lord, have we not prophesied in Thy name and in Thy name have cast out devils, and in Thy name done many wonderful works?’ Yet to all such he will say; Depart from me, ye that work iniquity.’ You say that means the outsiders? No, it does not. . . . This means you, Latter-day Saints, [you] who . . . do many wonderful things in the name of Jesus. And yet how many we see among this people . . . that become careless, and treat lightly the ordinances of God’s house . . . ; yet they think they are going by and by, to slide into the kingdom of God; but I tell you unless they are righteous and keep their covenants they will never go there. Hear it, ye Latter-day Saints!”4

Matthew 22 features a parable Jesus taught about the marriage of the king’s son, which will be fulfilled in the Second Coming of the King’s Son. In the story the king came in to see the guests and discovered a man who “had not on a wedding garment.” The noun “garment” is related to the Greek verb enduein, which means to put on, like a garment. The man was not properly clothed, not properly empowered, not fully invested or endowed. For passage into the company of God there are sentinels placed to check if guests are properly clothed and fully invested or endowed.

The real focus and climax of Temple instruction, covenants, and ordinances is not merely to enter into the presence of God; it is to become like our Father and our Savior. We can actually become “saviors on Mount Zion.” A savior does for others what they cannot do for themselves. Mount Zion has reference to the mountain of the Lord’s House, the holy Temple. We are invited not only to work in the Lord’s vineyard; we are invited to work, worship, and serve in His House.

President Howard W. Hunter said: “We . . . emphasize the personal blessings of temple worship and the sanctity and safety that are provided within those hallowed walls. It is the house of the Lord, a place of revelation and of peace. As we attend the temple, we learn more richly and deeply the purpose of life and the significance of the atoning sacrifice of the Lord Jesus Christ. Let us make the temple, with temple worship and temple covenants and temple marriage, our ultimate earthly goal and the supreme mortal experience.”5

Elder J. Ballard Washburn adds, “We go to the temple to make covenants, but we go home to keep the covenants that we have made. The home is the testing ground.”6

As important as Joseph Smith and the Book of Mormon are to the restored gospel, they are not even mentioned in Temple ordinances. The Temple is very focused on our Father and His Son and what they are doing with us here-so we can gradually learn to be like them and help continue their work and glory.

President Harold B. Lee arrived one night at the Manti Temple during a heavy snowfall. The local Church leader with him remarked: “You know, Brother Lee, that temple, floodlighted as it is, is the most beautiful when there is a storm.” True, President Lee thought, the Temples are never more beautiful than in times of storm.7

In our lives there are serious storms ahead, so we must make the Temple our anchor to keep us firm and steadfast, to help us become “fully invested” and become as our Father and our Savior are.