SALT LAKE CITY – It was a somber and heartfelt beginning to the annual Christmas concert with the Mormon Tabernacle Choir and the Orchestra at Temple Square Friday. A statement from the First Presidency was read before the audience and performers took a moment of silence to remember the children and teachers who died in a tragic school shooting in Connecticut Friday morning.

(For complete LDS Newsroom Coverage of this event, click here.) 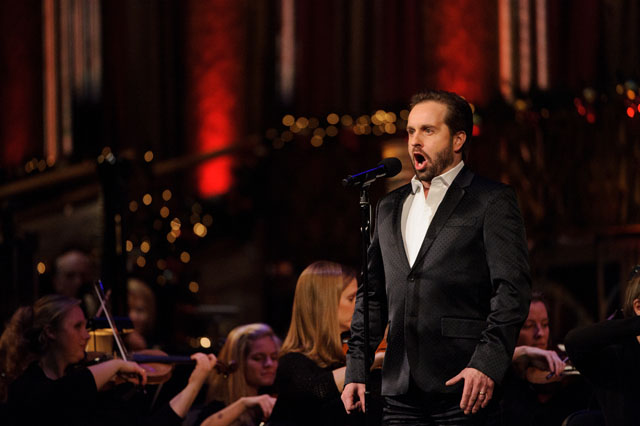 “I don’t think there’s a hall like this anywhere in America,” said Tom Brokaw during a news conference following the first performance. “To step on stage, as long as I have been doing this, and see 22,000 people looking at you expectantly gets all your nerve endings exposed.”

In the performance, Brokaw tells a story entitled “Christmas from Heaven: A Gift That Changed the World.” During his narration the Conference Center is transformed into a scene from post-World War II as the sound of airplane engines roar above the audience followed by dozens of pieces of candy tied to handkerchief parachutes float from the ceiling of the Conference Center into the laps of audience members.

It represented the way Gail Halvorsen, an Air Force pilot dropped handkerchief parachutes of candy from his plane during the Berlin airlift in 1948 and 1949. Mr. Brokaw surprised everyone when he introduced  the “Candy Bomber” in person to a standing ovation. 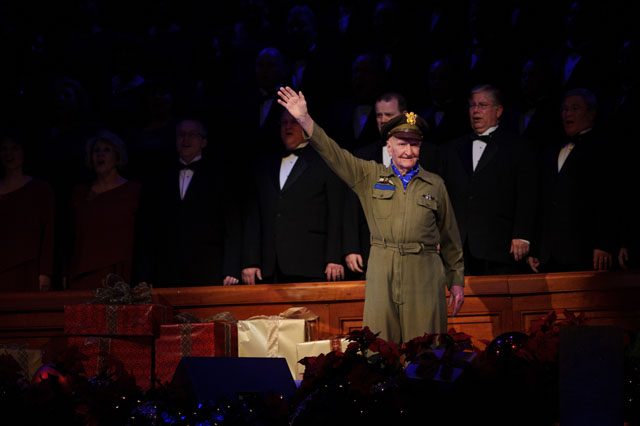 Alfie Boe is a “singing sensation” according to Mack Wilberg, Mormon Tabernacle Choir director. “To perform here is a lifelong dream,” said Boe. Besides singing the traditional carols of Christmas, Boe sang “Bring Him Home” from Les Misrables to a standing ovation. During the news conference he was asked why this song is so touching to him when he sings it. “Because I do it really well,” was his candid but kidding answer.

Seriously, Boe said, “It’s the song, not the singer.” “Bring Him Home” is not the actual title of the song; it is “The Prayer.” “So if you have that in mind, that you’re actually saying a prayer instead of singing a song, then it comes across really well.”

Wilberg said the performance is dancing, singing and speaking and is filled with magnificent costumes and staging. “We have a little fun and we also celebrate what Christmas is all about.”