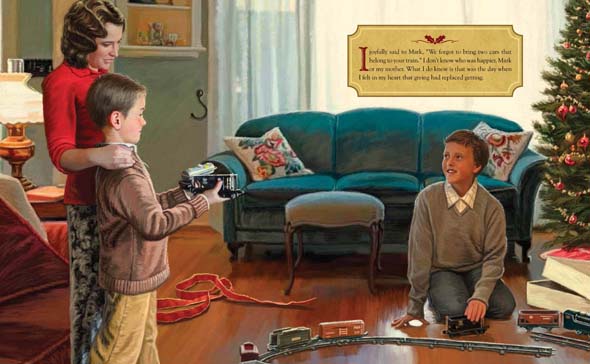 This truly is a most wonderful time of year to give to others. But a most memorable gift would be a book to cherish throughout the year, or possibly a lifetime, as we reflect on the life of the Savior and the selflessness and perfect example He continually provides for us in our lives.

The Christmas Train, by Thomas S. Monson, and beautifully illustrated by Dan Burr, demon-strates a lesson that all families should teach. The story takes place in the late 1930’s when President Monson was a young boy eagerly awaiting Christmas. He wanted an electric train and was hoping that would be the present he opened on Christmas morning. And, as a result of the sacrifices of his parents, that is just what he received. But later that day, his mother asked if he wanted to accompany her to a neighbor’s house where another young boy lived. She had purchased a wind-up train for this other boy and was about to take it to him. When Tommy looked inside the box, he saw a particular car in the set that he didn’t have and he desired it. When Mother finally gave in, they set off to the neighbor’s house. But something happens there to make Tommy rethink his actions and show the Christ-like example that it’s much better to give than to receive. 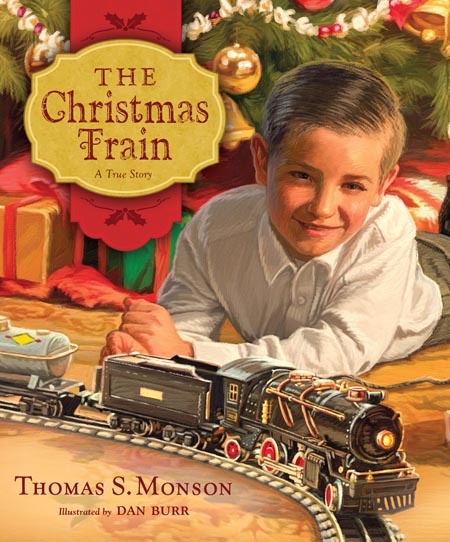 I asked the illustrator how he went about painting each of these wonderfully crafted pictures to reflect a time nearly 80 years ago. He told me that the digitalized process he now uses enables him to continue colors and his style from his other works of art. Every stroke and brush is made with decisions to help move the story along. Each of his paintings in this book is a laborious attempt to take the reader onward to the next page. He said that he used old photos from President Monson’s childhood home and neighborhood to “capture the look and feel of the era”. He wanted to awaken a feeling of those long-ago days so he used warmer colors, along with a special glazing technique to perfectly accomplish his objective.

Mr. Burr did an extensive amount of research on the train. He found a Lionel train set that matched the time era and fortunately found that Lionel had reintroduced the train for sale. So, Mr. Burr bought it so that he could paint it from all angles. The wind-up train had to be painted from images off of old photos.

Once you and your family read through this up-lifting picture book (which could be done at one sitting) you’ll easily see the tremendous life-long lessons that the book teaches. You’ll also get a glimpse of our great prophet when he was young and made an important decision to help others. 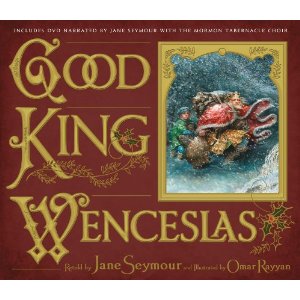 Good King Wenceslas, written for the Tabernacle Choir by David T. Warner, and gorgeously illustrated by Omar Rayyan, was performed as part of the Tabernacle Choir and Orchestra Christmas Concert at Temple Square last Christmas, 2011. This book includes a DVD of Jane Seymour reading this famous story as she did last year. I was fortunate enough to be at one of these spectacular concerts and heard Ms. Seymour’s opening lines prior to reading the story of Good King Wenceslas. Those inspiring words are found at the beginning of this beautiful book. If you’ve never thought about the profound words to this old Christmas carol, this book brings to light the true meaning and actions of Christmas. King Wenceslas noticed from his castle window a figure in the far off distance gathering firewood for his family’s warmth. The King gave his page boy a command to “Bring me flesh and fruit so fine, / Bring me pine logs hither, / Thou and I will see him dine, / When we bear them thither.” So as soon as the page boy gathered the necessary food and drink for this man and his family, they went out into the cold and snow and sought the dwelling. The page boy learned much from this wintery night and the food they took to one less fortunate.

When I asked the illustrator how he was affected by the text from this well-known song, he said the “illustration is driven and inspired by the text” and he was “attempting to complement and hopefully accentuate the efforts” of this song. Mr. Rayyan used watercolor and attempted to emulate 14th century painters to establish a sense of this era. He also said that he was impressed with 19th century classicists, romantics and symbolist painters and this was how he came to paint these spectacular images on every single page. There is a definite aura of old English tonality throughout these beautiful paintings. He used warm festive colors for the interior pictures and grays and blues to create the cold wind-swept fields for the outside pictures.

This stunning picture book not only takes you through the evening of King Wenceslas and his page boy helping a poor family, but it also informs the reader with sides of information about the life and celebrations of this long-ago time. There is a nice tie-in found at the back of the book that invites all to follow “In the Master’s Steps.” The last verse of the song is also the last of this miraculous story and perfectly summarizes what we all should do at Christmas and all during the year: “Therefore, Christians, all be sure, / Wealth or rank possessing, / Ye who now will bless the poor, / Shall yourselves find blessing.”