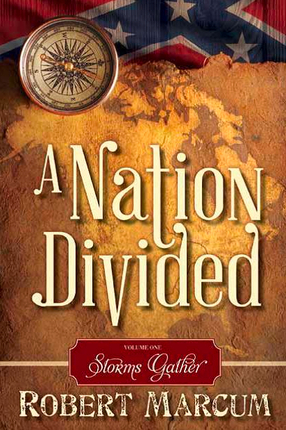 Being a fan of various LDS Historical epic series, I was excited to read the new Civil War series A Nation Divided by Robert Marcum which begins with Storms Gather. My biggest complaint about this type of series is the long wait between volumes and I hadn’t progressed very far with this one before I knew waiting for the second volume will be difficult.

Storms Gather takes place in St. Louis, Missouri, shortly after the election of Abraham Lincoln but before his inauguration. This is the time when states were deciding whether or not to leave the union or remain. It was a time when the slavery question was exploding and border states were in a frenzy over whether or not to permit slavery and Missouri was one such state caught up in its own civil war over which side to choose.

Rand and Lizzy Hudson lost their father in one of the vicious attacks against Nauvoo by anti-Mormon mobbers. Their mother whose testimony had seemed so strong decided against following Brigham Young west and instead moved her children and her ferry and steamer boat business to St. Louis. She forbid any mention of the Church and though Lizzy secretly remained strong in her faith, Rand slowly drifted away.

When their mother passed away almost a decade later, she left her thriving business to her children and almost immediately they are drawn into a battle with their uncle and his unsavory friends who are determined that both the many ships now owned by the siblings and the union arsenal in the city should be turned over to the Southern rebels. They also discover their mother had continued to keep a Book of Mormon near her and recent notations in the margins indicate she’d continued to read it long after she forbid any mention of the Church.

Newton Daines is another major character. A young Irishman who faces almost as severe prejudice as his black friend, Felix, who worked ten years to buy his mother’s and sister’s freedom, only to arrive too late. His mother is already dead and his sister dies in childbirth, leaving him with an infant to raise and try to keep hidden from those who would claim the boy as their property. Newton escaped the vicious world of a fighter to start over in America which he finds isn’t as free as he’d expected. His unfortunate choice of a bathing spot almost leads to his death and an accidental opportunity to rescue Lizzy.

Lizzy is in love with a young man from a prominent Southern family, the owners of more than a hundred slaves. He becomes one of the first Confederate soldiers and serves in the attack on Fort Sumter. She is torn between her love for this man and her complete abhorrence of slavery. A feisty Irish woman who lives and works at the boarding house where Newton stays becomes his friend. As they combine forces to support the underground railroad both of their lives are in danger. Rand is cornered into courting the niece of the state representative who fiercely supports Lincoln and the Union and he discovers he really doesn’t mind. Felix, too, has a woman thrust on him. His nephew needs a wet nurse and the only one he can find is a big half breed Black/Indian mix woman who soon loves the child as fiercely as he does.

Some of the characters, particularly the villains, are a little stereotyped but most are strong, distinctive individuals who face big choices and grow through facing risks and danger. The major characters are realistic in that they aren’t perfect, they don’t always make the wisest choices, they sometimes doubt themselves, and they don’t always win. The plot is handled well even though, as is always the case in historical novels, there are certain actions and events that must follow the time sequences and realities of the historical period. There is plenty of fast-paced action that will keep the most action oriented readers happy. There is also a great deal of political intrigue. Readers, along with the characters in this story will find themselves studying the issues of that time period and struggling to determine if and when compromise of moral issues is justified. I predict this series will become a big time favorite of many readers.

Robert Marcum graduated from BYU and received his master’s degree from Idaho State. He taught seminary and institute before receiving a position at BYU-Idaho where he taught for seventeen years and headed the Religion Department for five of those years. He has also led tours for adults and students to many foreign countries including Israel and Egypt. He taught a semester in the Ukraine as well. He and his wife have eight children and twenty grandchildren. They live in Rexburg, Idaho, where he serves as stake president of the Henry’s Fork Stake.